The growth of our popular resistance and the global, Palestinian-led BDS movement give us hope at a time when Israel’s far-right regime is intensifying its system of apartheid and crimes against our people. 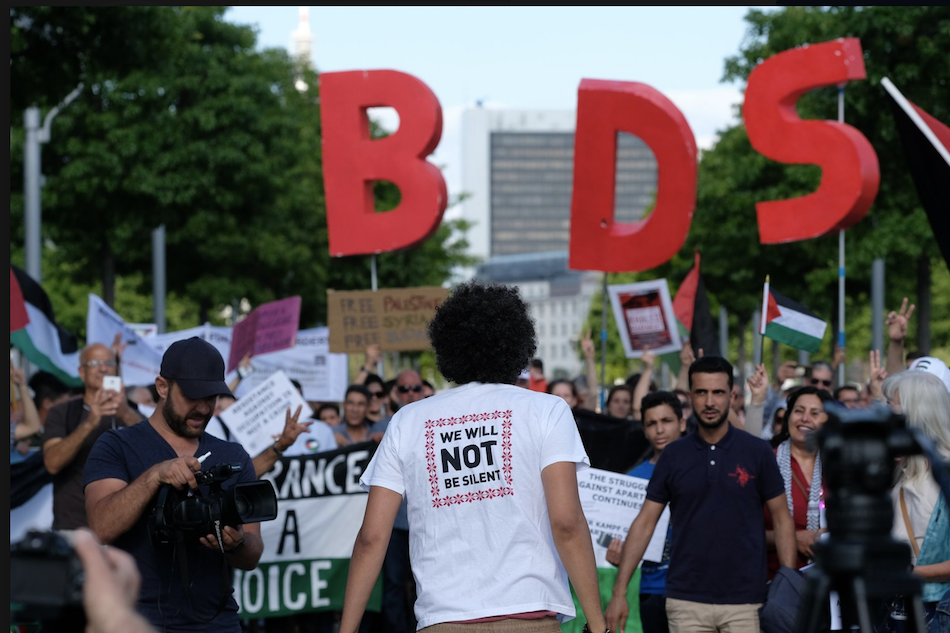 Today, Palestinians mark with a mix of alarm and hope the 14th anniversary of the BDS Call, launched by Palestinian society in 2005 in pursuit of freedom, justice and equality.

The growth of our popular resistance and the global, Palestinian-led BDS movement give us hope at a time when Israel’s far-right regime is intensifying its system of apartheid and crimes against our people, in open partnership with the anti-Palestinian Trump Administration, and with the complicity of the European Union and despotic Arab regimes.

Israel’s ongoing Nakba against the Palestinian people is most brutally manifested in its illegal siege and repeated massacres that have reduced Gaza into an uninhabitable ghetto, causing unspeakable suffering to its two million Palestinians.

It is also evidenced in its continued denial of the internationally recognized right of return for millions of Palestinian refugees, its gradual ethnic cleansing of indigenous Palestinians, particularly in Jerusalem, and its adoption of the so-called Jewish Nation-State Law, that makes its decades-old apartheid regime constitutional.

Today also marks the 15th anniversary of the International Court of Justice’s decision to condemn Israel’s wall in the occupied Palestinian territory as illegal and to remind all states of their obligation not to recognize, aid or assist Israel in its violations of international law, and instead act to end them. Fifteen years since, Israel continues to build its illegal settlements and the apartheid wall, which Trump uses as a model to justify his intended anti-immigrant wall along the Mexican border.

But we are fighting back with the help of unions and social movements representing millions around the world which are joining the BDS movement. They recognize that Israel’s fanatic regime of oppression against Palestinians has become a model for racist, xenophobic and fascist political tendencies in Europe, the US, Brazil, India, the Philippines and beyond.

#Apartheid was the second most popular hashtag trending during Eurovision in apartheid Tel Aviv, partly explaining the contest’s failure to attract more than 5,000, in contrast to the 40,000 to 50,000 that had been expected to show up.
More than 100 commercial, cultural and sporting activities in Italy declared themselves free of Israeli apartheid in June, joining dozens of city councils and cultural spaces in the Spanish state and across Europe.

The Argentinian national football team cancelled last year a friendly match with Israel after receiving appeals from Palestinians and international solidarity groups. During the same year, Natalie Portman, Shakira, Lana del Rey, among other prominent artists, cancelled engagements in Israel to protest its crimes against Palestinians. Dozens of DJs and other musicians joined the cultural boycott of Israel.

Last week, more than 100 artists and cultural figures, including Hollywood names, condemned the McCarthyism of a German festival that cancelled a performance by rapper Talib Kweli because of his refusal to renounce his support for BDS.

Two weeks ago, the British Society for Middle Eastern Studies (BRISMES) adopted the academic boycott of Israeli universities over their complicity in planning, implementing and justifying Israel’s grave human rights violations. BRISMES joins a number of American academic associations that have adopted the boycott in recent years. Israeli Apartheid Week 2019 was a big success, despite rising anti-democratic repression in the US and Europe.

FNV, the largest Dutch trade union, with 1.1 million members, dropped Hewlett-Packard as a partner, over the complicity of HP-branded companies in Israel’s apartheid and violations of international law. The global online action #StopCemex reached over 1 million people, effectively transforming the annual propaganda effort of the cement giant into a powerful campaign against CEMEX’s complicity in Israel’s illegal settlements and wall.

Even major financial institutions are bowing to popular pressure. A fully owned subsidiary of the insurance giant AXA divested from Israeli drone manufacturer Elbit Systems, which sells weapons used by the Israeli military in attacks on Palestinians, following a pressure campaign that is continuing until AXA fully divests from Elbit and from Israeli banks that finance Israel’s settlement enterprise.

This comes after HSBC confirmed late last year that it had fully divested from Elbit Systems. Now campaigners are working to ensure HSBC divests as well from Caterpillar, whose equipment is used regularly by Israel’s military and security forces for the demolition of Palestinian homes, schools, orchards, olive groves and other agricultural lands.

In response to Israel’s ongoing Nakba, the most effective way to mark the BDS anniversary is by escalating our BDS campaigning through: