April 17, 2019
/ By
SumOfUs
/
France, Europe
The campaign against AXA's problematic investments continues, as AXA remains linked to Elbit Systems through an affiliate, and AXA maintains investments in five Israeli banks. 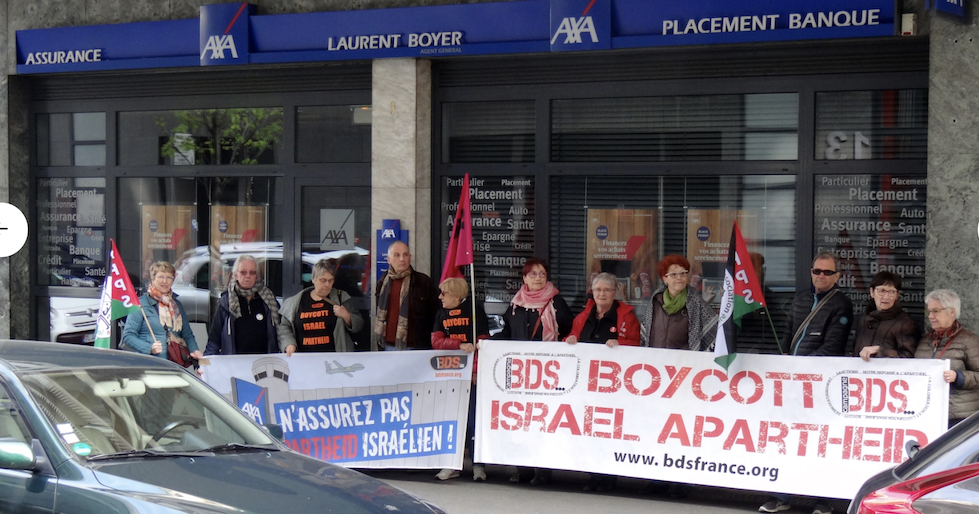 SumOfUs and the Coalition to Stop Assistance to Israeli Apartheid welcome AXA's decision to withdraw part of its investment in Elbit Systems, and call on AXA to end its complicity in full by withdrawing all of its investments in companies complicit in Israel’s occupation.

SumOfUs, an international NGO that acts as a check on the power of big business, launched an international petition in April 2018 that gathered more than 140,000 signatures. It  supported the coalition to Stop Assistance to Israeli Apartheid’s demands, in partnership with many organizations that are part of the BDS movement in France, that started the campaign in 2016.

The end of 2018 seems to have marked a new turning point for the unscrupulous investments of banking and financial companies in the arms manufacturer Elbit Systems - sordidly famous for providing cluster munitions banned by international law, and white phosphorus shells, both used against Palestinian civilian populations - a use also condemned by international law.

In December 2018, following a campaign by a coalition of British NGOs against its investments, HSBC decided to divest from Elbit Systems due to its involvement in the production and commercialization of cluster munitions. It is now AXA's turn to take the path of divestment and we welcome this first step.

AXA Investment Managers (a wholly-owned subsidiary of AXA) sold all its shares in the arms manufacturer on December 31, 2018 and confirmed last week that they "do not invest in cluster munition producers.”

However, AXA remains linked to Elbit Systems through its subsidiary Alliance Bernstein (AB). Last month, we learned that AXA no longer controlled AB - reducing its stake in the company from 65.6% to 31.7%.

While this sale seems to affect the decision-making power of AXA within AB, it does not absolve the multinational of its complicity in the investments maintained by AB in the arms manufacturer and in the five Israeli banks - all of which participate in financing the illegal activities of military occupation and colonization carried out by the state of Israel.

This sale does nothing to diminish the direct investments held by AXA IM in four of the five Israeli banks. AXA continues to deny the legal and moral problem of its investments in the arms manufacturer Elbit Systems and Israeli banks, the insurer.

While we welcome the AXA Group’s first decision, it is insufficient to end  AXA's complicity, both direct and indirect, in serious violations of international law and human rights. We are currently working on a report shedding light on the extent of AXA's investments, which still remains involved in financing these companies on the level of tens of millions of dollars via its subsidiary AXA IM and investments through its subsidiary AB. We expect the multinational AXA to follow this divestment logic to its conclusion in order to fully comply with international law and to finally respect the principles of investing that it promotes so much.

The campaign against AXA's problematic investments is not letting up:

On this International Day of Solidarity with Palestinian Political Prisoners, the Coalition to Stop AXA Assistance to Israeli Apartheid is organizing actions around the world to call on AXA to divest from companies that violate international law and actively participate in maintaining a violent and illegal regime of oppression against the Palestinian people. We will also be at the AXA AGM on April 24 to ensure that all AXA investors are informed of AXA's irresponsibility.

AXA IM’s divestment from Elbit Systems is in line with the global trend whereby more and more institutions, banks and companies are distancing themselves from Israeli apartheid. But for Palestinians living under Israel’s regime of apartheid, colonialism and occupation, AXA’s step is not enough. Grassroots mobilisation will not end until Axa and other companies totally end their complicity with Israel’s racist regime.

Sources:
-Fintel financial database reporting the exit of AXA IM from Elbit Systems' capital.
-Press release from the AXA Group announcing the decrease of its shares in AXA Equitable Holding, the majority subsidiary of the AB Group.

SumOfUs.org is a global movement of consumers, investors, and workers all around the world, standing together to hold corporations accountable for their actions and forge a new, sustainable and just path for our global economy.