Global sportswear manufacturer Puma is involved in violations of international law and human rights. Puma is the main sponsor of the Israel Football Association (IFA), which includes teams in Israel’s illegal settlements on occupied Palestinian land.

In addition, Puma’s current and past exclusive licensees in Israel have operations in illegal Israeli settlements.

Israel’s military occupation expels Palestinian families, including children, from their homes to give way for these settlements. Israeli settlements are considered war crimes under international law.

Puma markets itself as a company that cares about equality yet it funds the apartheid the IFA helps sustain.

In July 2018 it was announced that Adidas was no longer sponsoring the IFA following an international campaign and the delivery of over 16,000 signatures to Adidas headquarters.

We can do this again. Join Palestinian athletes calling for a boycott of Puma until it ends its support for Israel’s illegal land grabs.

As one of the world’s top athletic apparel makers and the only international sponsor of the Israel Football Association, Puma’s sponsorship brings international legitimacy to the IFA’s actions. The IFA, as documented by Human Rights Watch, includes football clubs based in illegal Israeli settlements on occupied Palestinian land. Puma’s current and past exclusive licensees in Israel have operations in illegal Israeli settlements.

Puma’s sponsorship of the IFA helps keep its direct involvement in violations of human rights and international law off the field, allowing Israel’s settlement regime to continue and expand.

The IFA has refused to take measures to end its complicity, despite being repeatedly condemned by UN advisors, dozens of elected officials, civil society and human rights groups representing millions and public figures.

In an attempt to deflect criticism, Puma responded to the campaign claiming a "devotion to universal equality."  It’s time for Puma to abide by its stated commitment to human rights and end all activity in illegal Israeli settlements.

The Israel Football Association includes six Israeli football clubs located in Israel’s illegal settlements built on Palestinian land occupied by the Israeli military. Israel’s settlements contribute to serious human rights abuses and are a direct cause for restrictions on Palestinian freedom of movement, access to natural resources and ability to build homes and conduct business.

Together with Israel’s illegal wall, military checkpoints and Jewish-only roads, the settlements form part Israel’s occupation and apartheid infrastructure that systematically obstruct every aspect of Palestinian life, including the practice of sports. 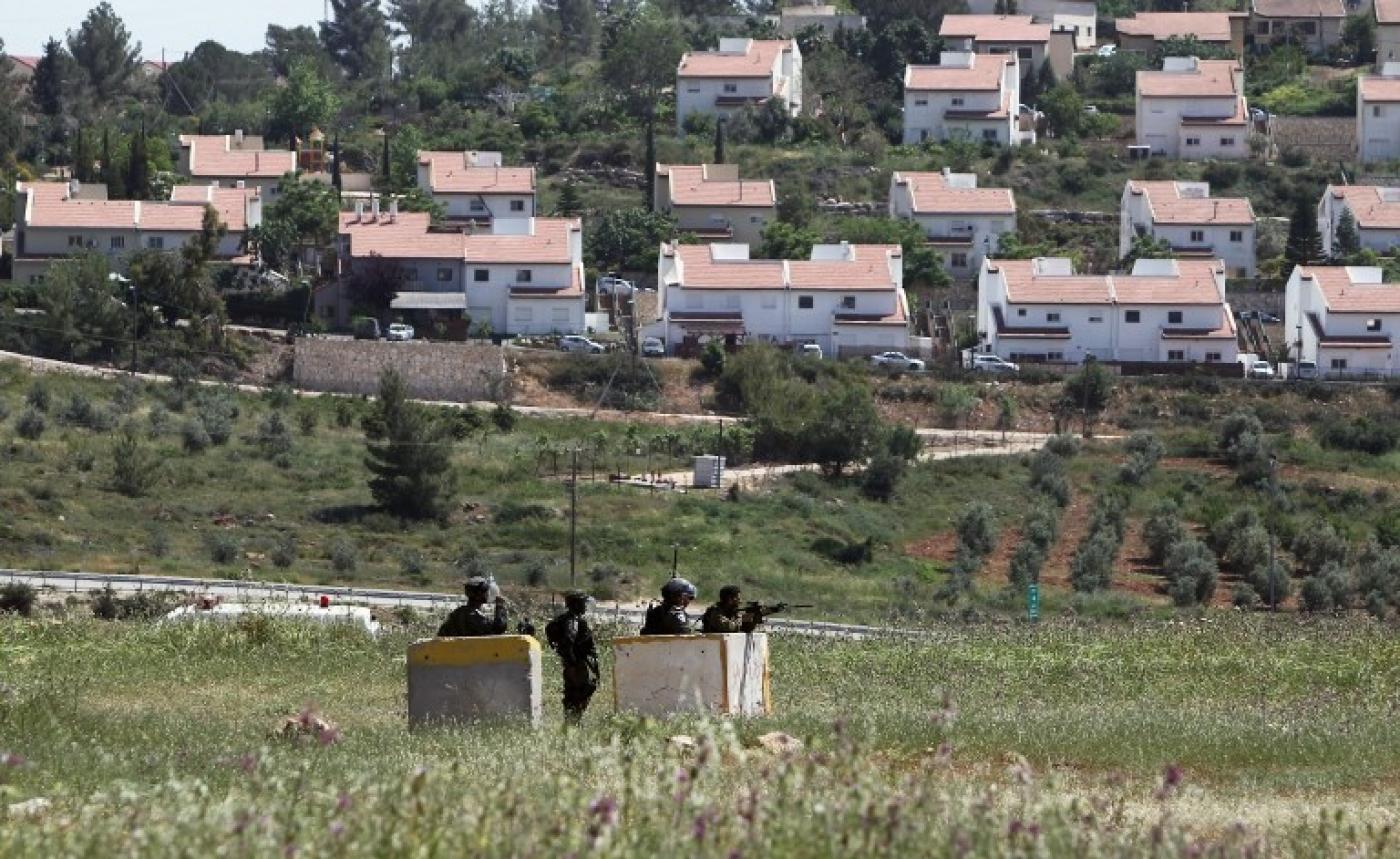 Puma’s own assessment of its track record on human rights identified “sponsorship activities” as one of its “weak spots.”

Israel uses sports to prop up its failing image and normalize its war crimes and egregious human rights violations against Palestinians.

Palestinian athletes are regularly prevented from training and participating in competitions, at home and abroad.

In 2018 alone, Israeli snipers ended the careers of dozens of Palestinian athletes in Gaza, firing on peaceful protesters participating in demonstrations for an end to Israel’s siege and their UN-sanctioned right of return. A UN Commission of Inquiry found that Israeli soldiers intentionally targeted Palestinians participating in the demonstrations, actions amounting to war crimes. 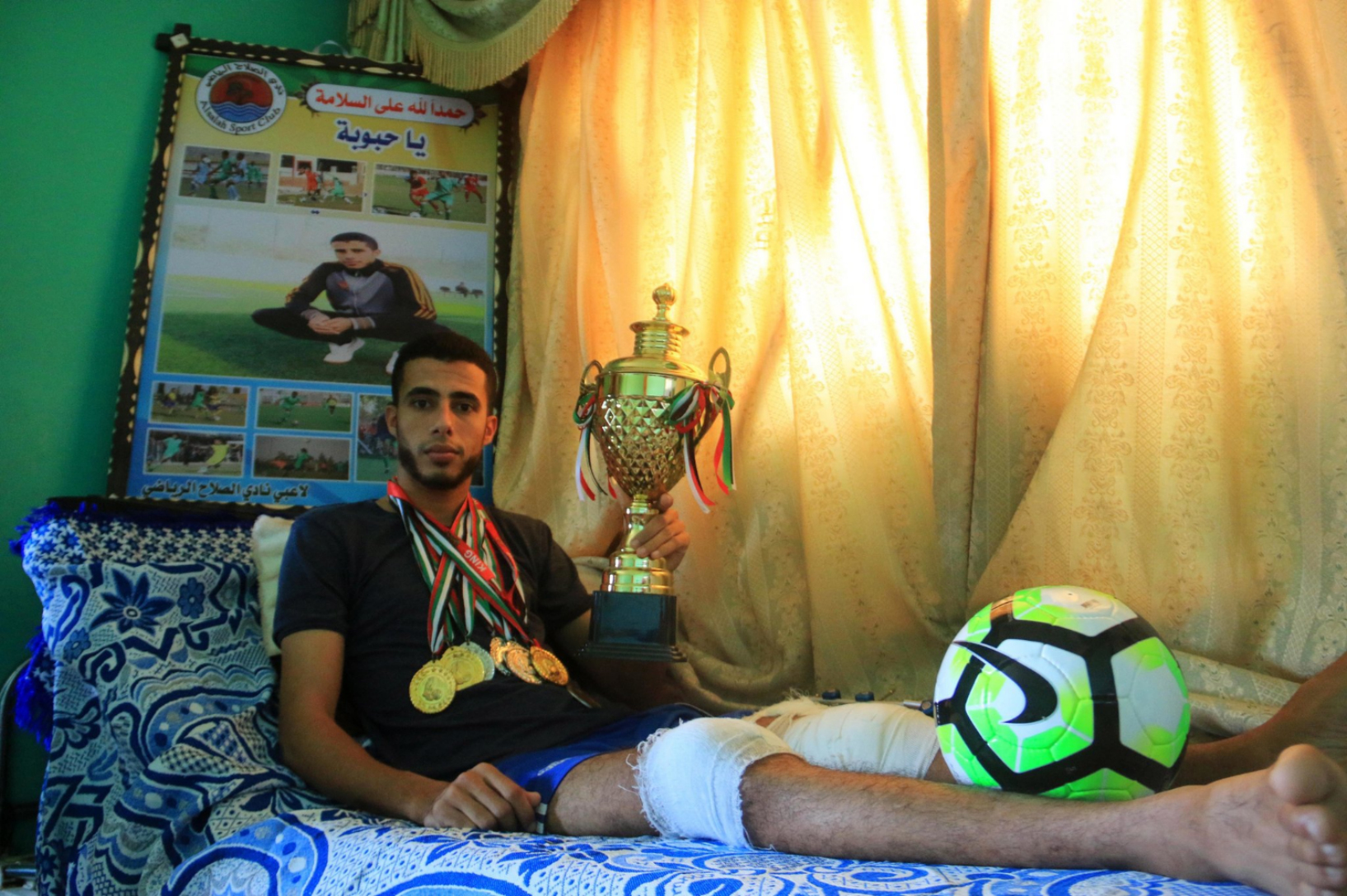 Puma’s exclusive licensee in Israel is Al Srad Ltd., part of the Irani Corporation, whose Factory 54 clothing chain has an outlet in the “no man’s land” surrounding occupied East Jerusalem. The “no man’s land” is considered to be occupied territory under international law and is part of Israel’s illegal settlement-annexation enterprise.

Puma’s previous exclusive licensee in Israel (through 2020) was Delta Galil Industries, which also has branches in illegal Israeli settlements. 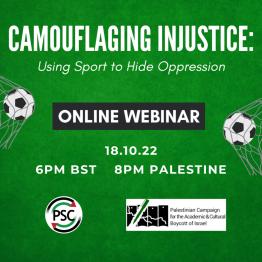 Palestinian sports associations and athletes have called on Puma to end its sponsorship deal with the Israel Football Association. 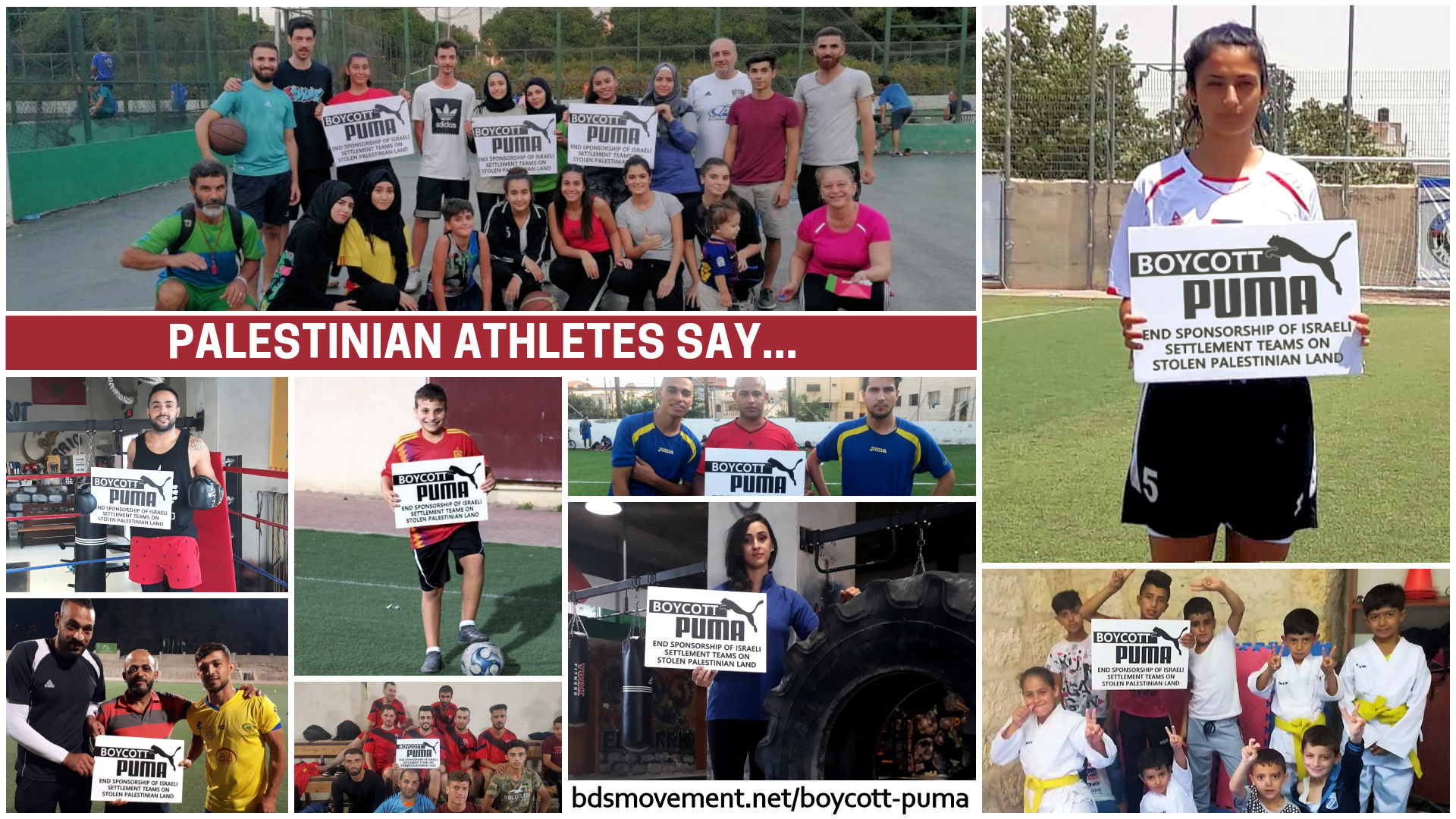 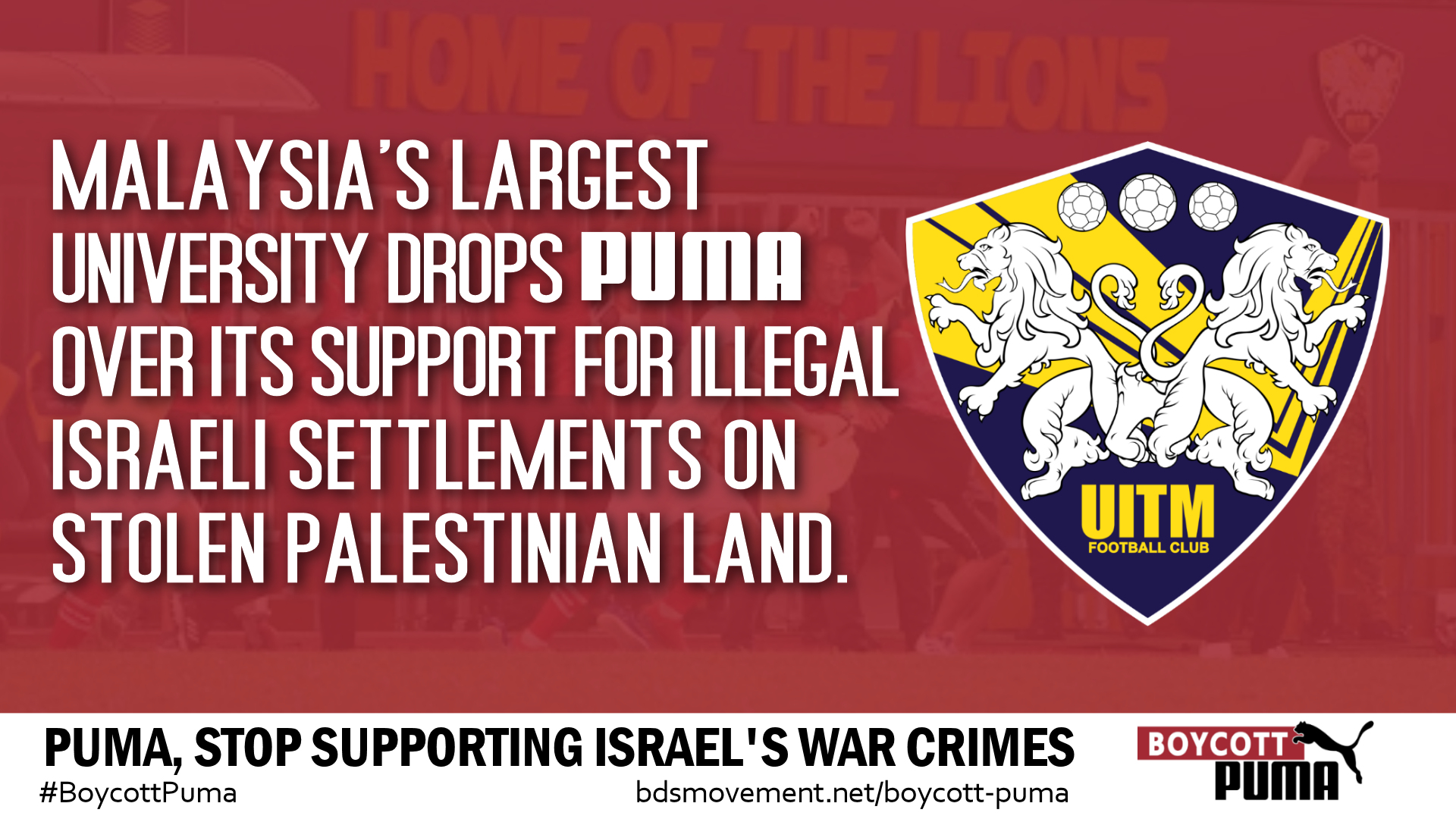 Qatar Sports Club has confrmed it will not renew with Puma. Malaysia’s largest university has ended a sponsorship deal with global sportswear brand Puma for its football team. The university confirmed that the contract was not renewed due to Puma’s involvement in Israel’s human rights abuses. Following tens of thousands of messages to UK football clubs, Luton Town FC dropped Puma, Forest Green Rovers FC pledged not to sign with Puma, stating Palestine represents "greatest injustice," Chester FC decided not to renew with Puma, citing “ethical working practices" among its criteria, and Liverpool FC, which was in talks with Puma, opted for another sponsor. 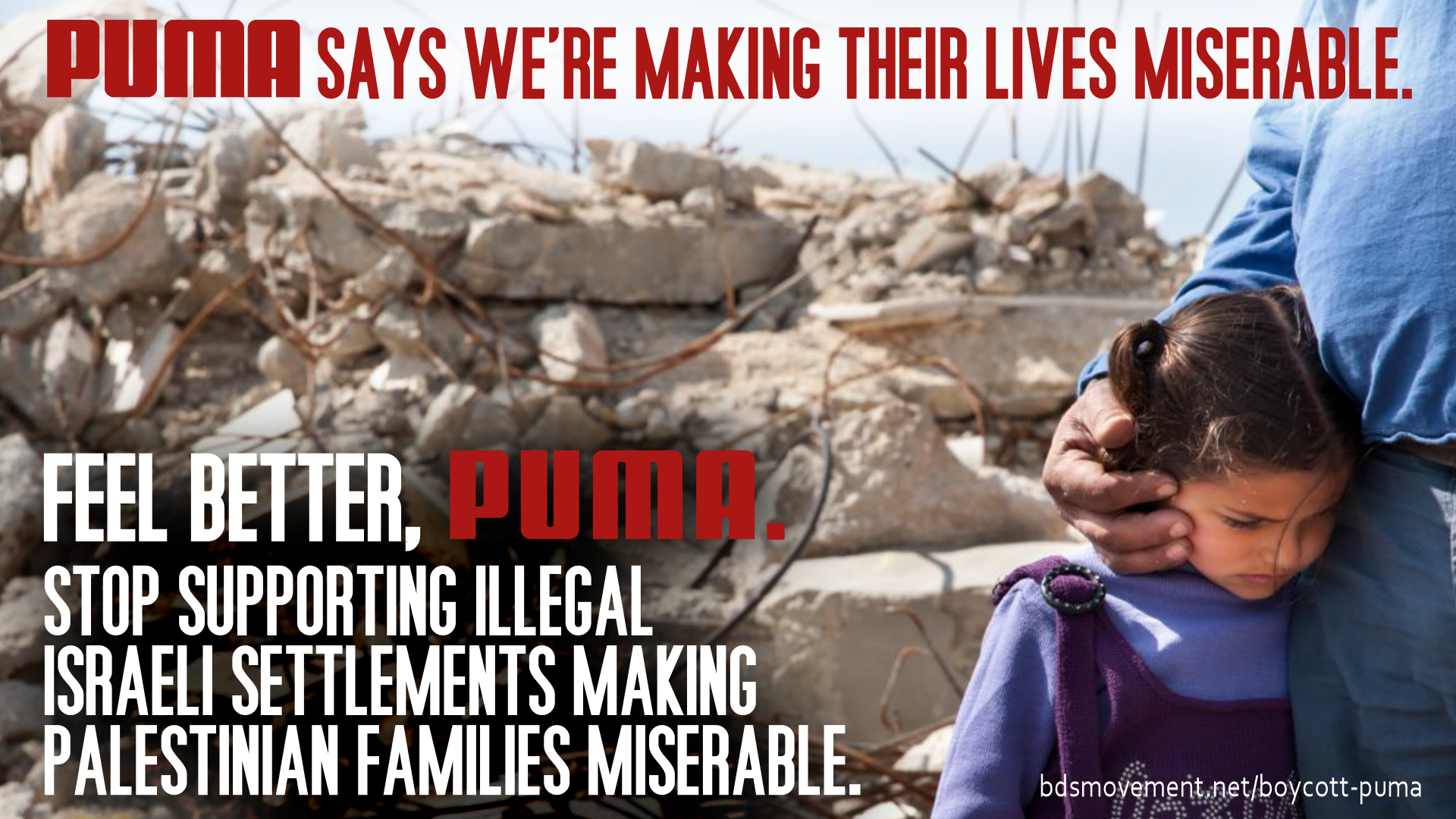 In a chance encounter, a Puma attorney admitted to a Palestinian rights supporter that the principled calls from human rights groups and sports associations to end its support for illegal Israeli settlements is making their lives "miserable." 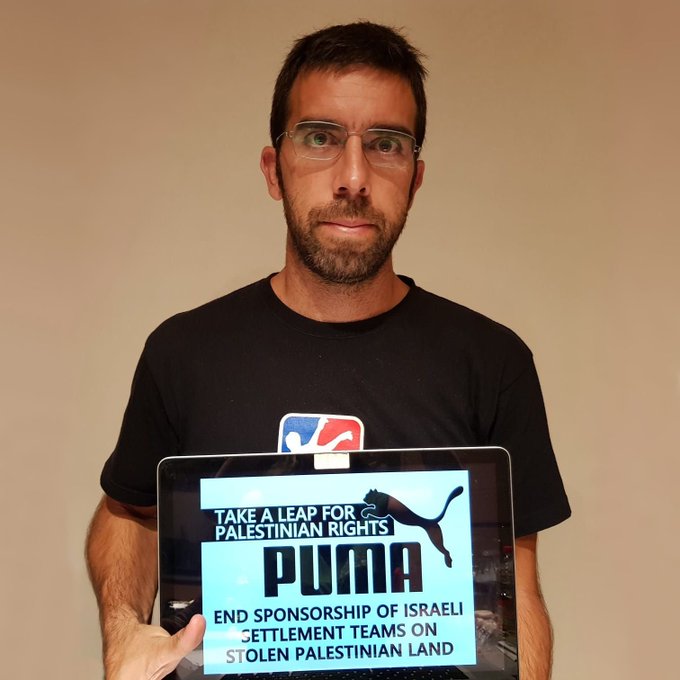 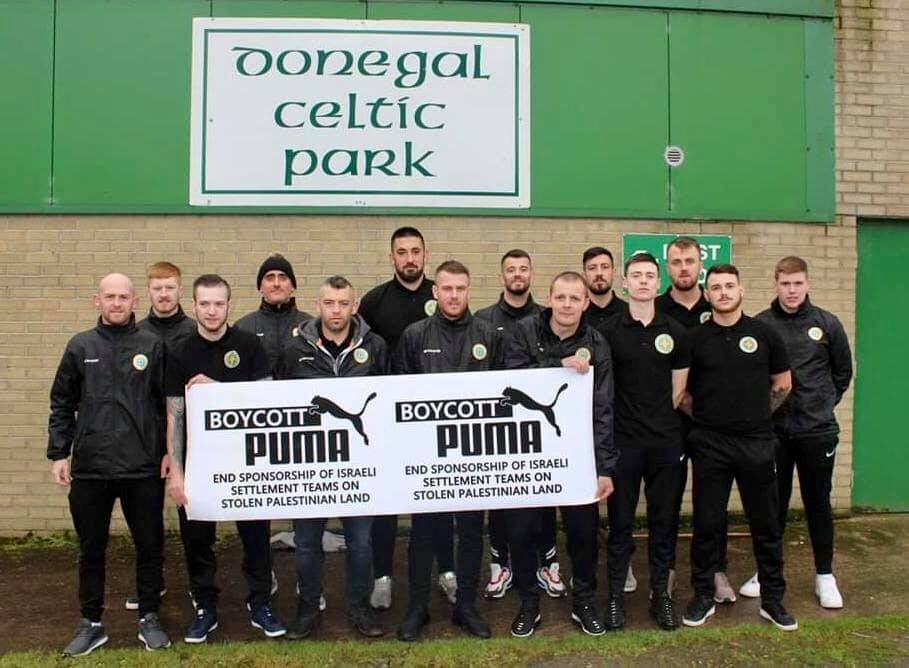 Belfast football club Donegal Celtic supports the call from Palestinian athletes urging Puma to end its sponsorship of the Israel Football Association over its inclusion of teams in illegal Israeli settlements. 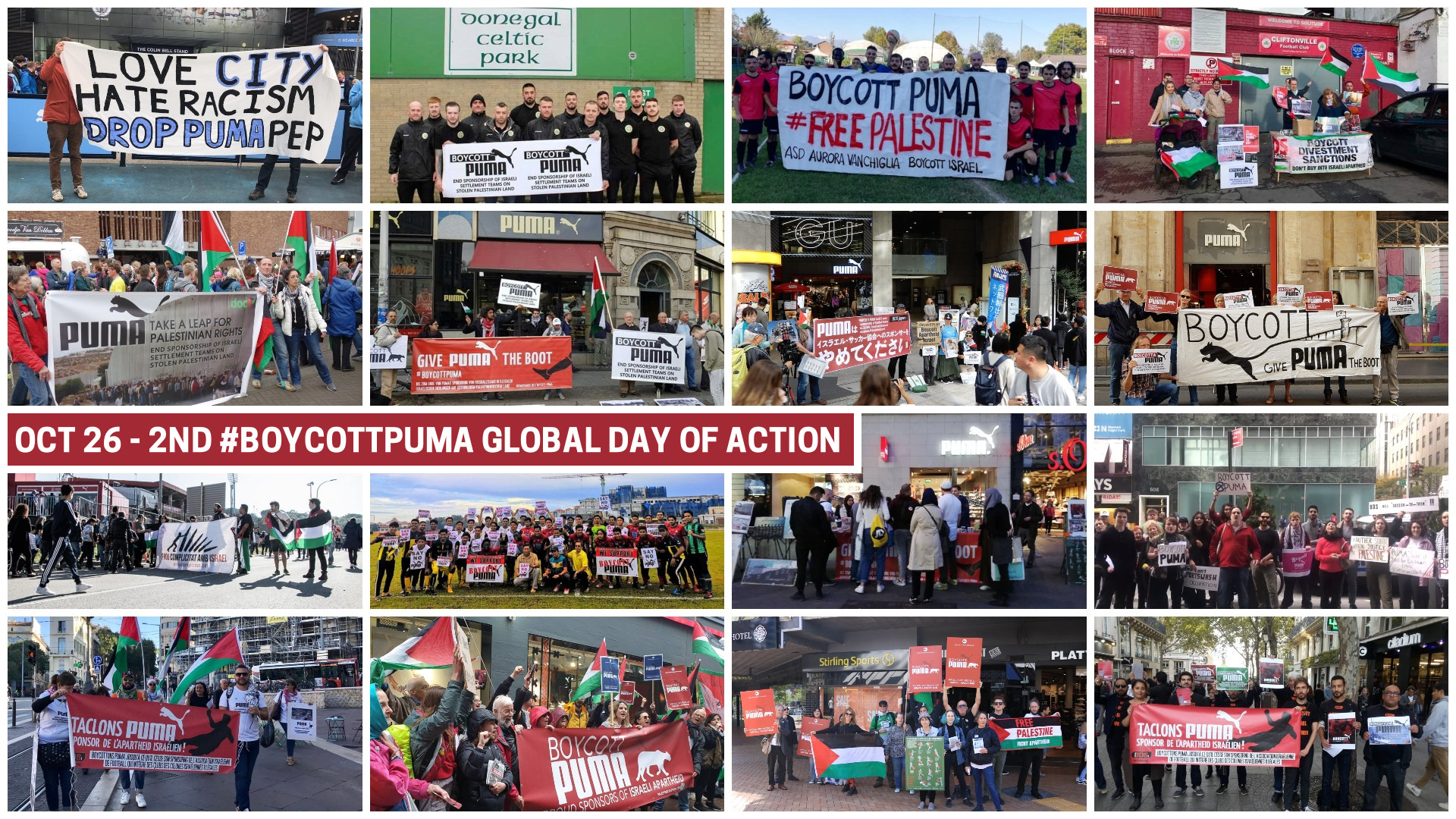 The Second Global #BoycottPuma Day of Action saw more than 50 actions in 20 countries across the world. Protests were held at Puma shops and offices and at matches of Puma-sponsored teams. Sports clubs stood in solidarity with the call to boycott Puma by more than 200 Palestinian sports teams. 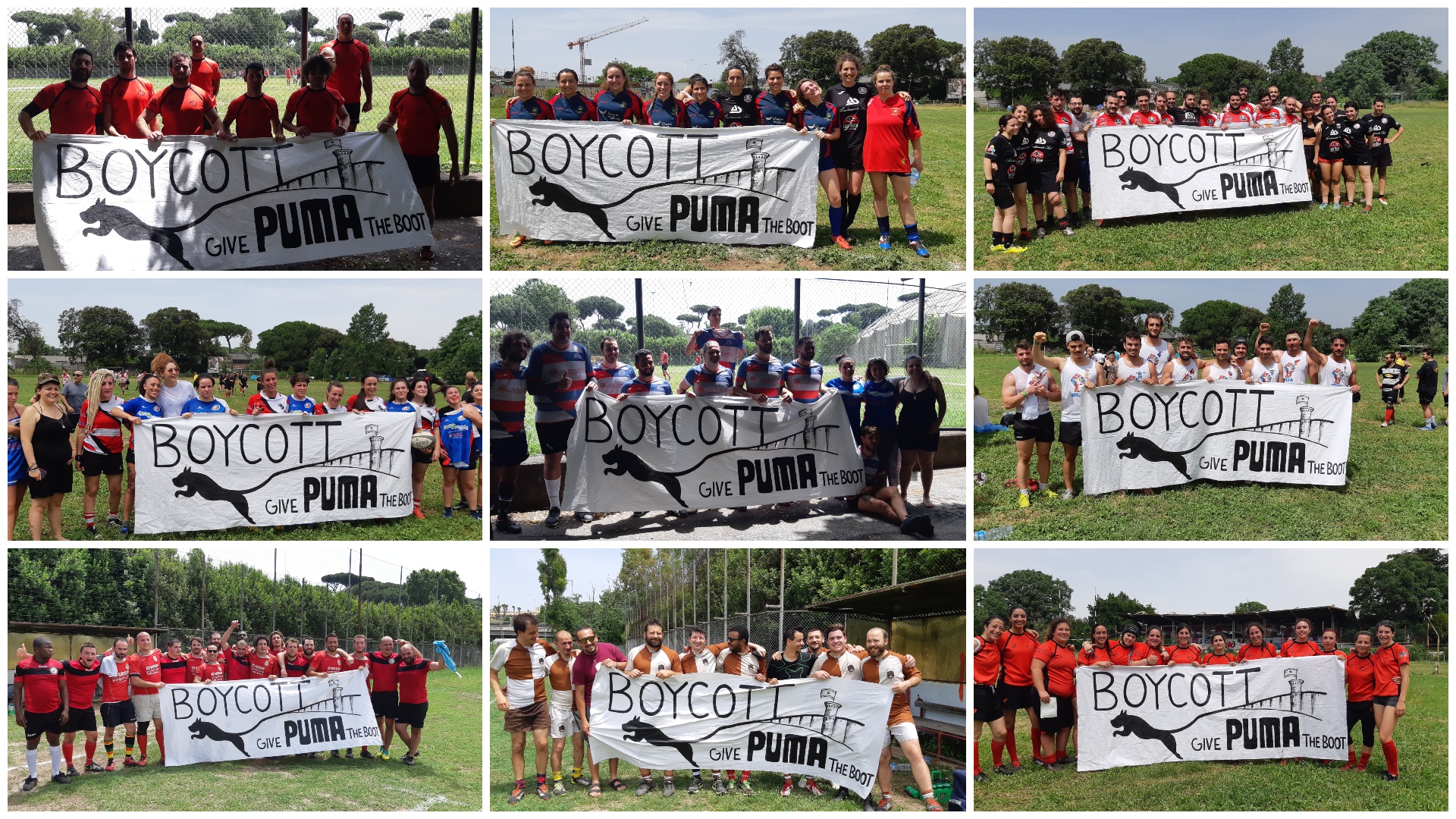 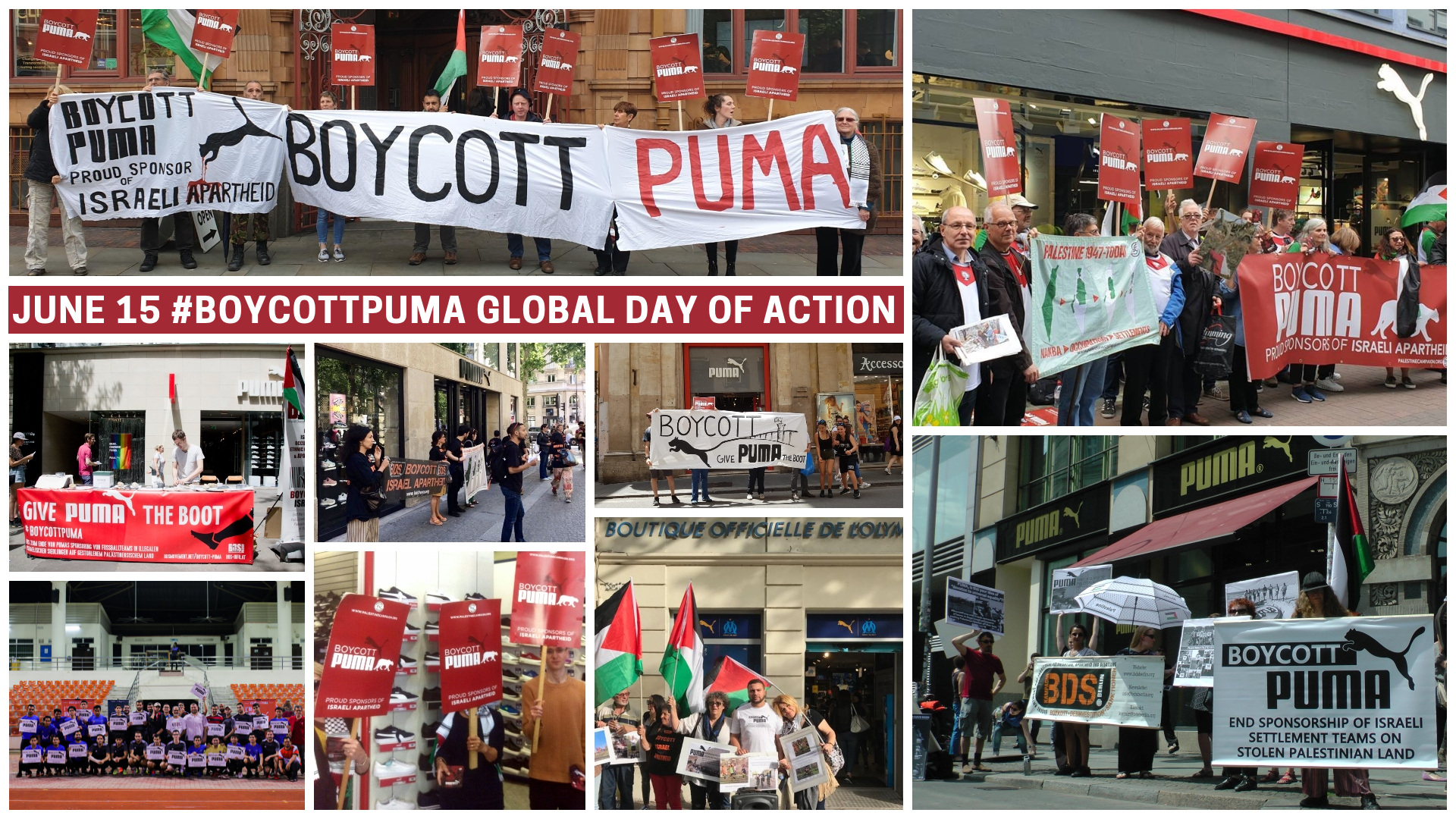 Supporters of Palestinian human rights and fair play in sports from more than 20 countries across the world responded to the call from Palestinian teams and athletes to boycott global sports manufacturer Puma. 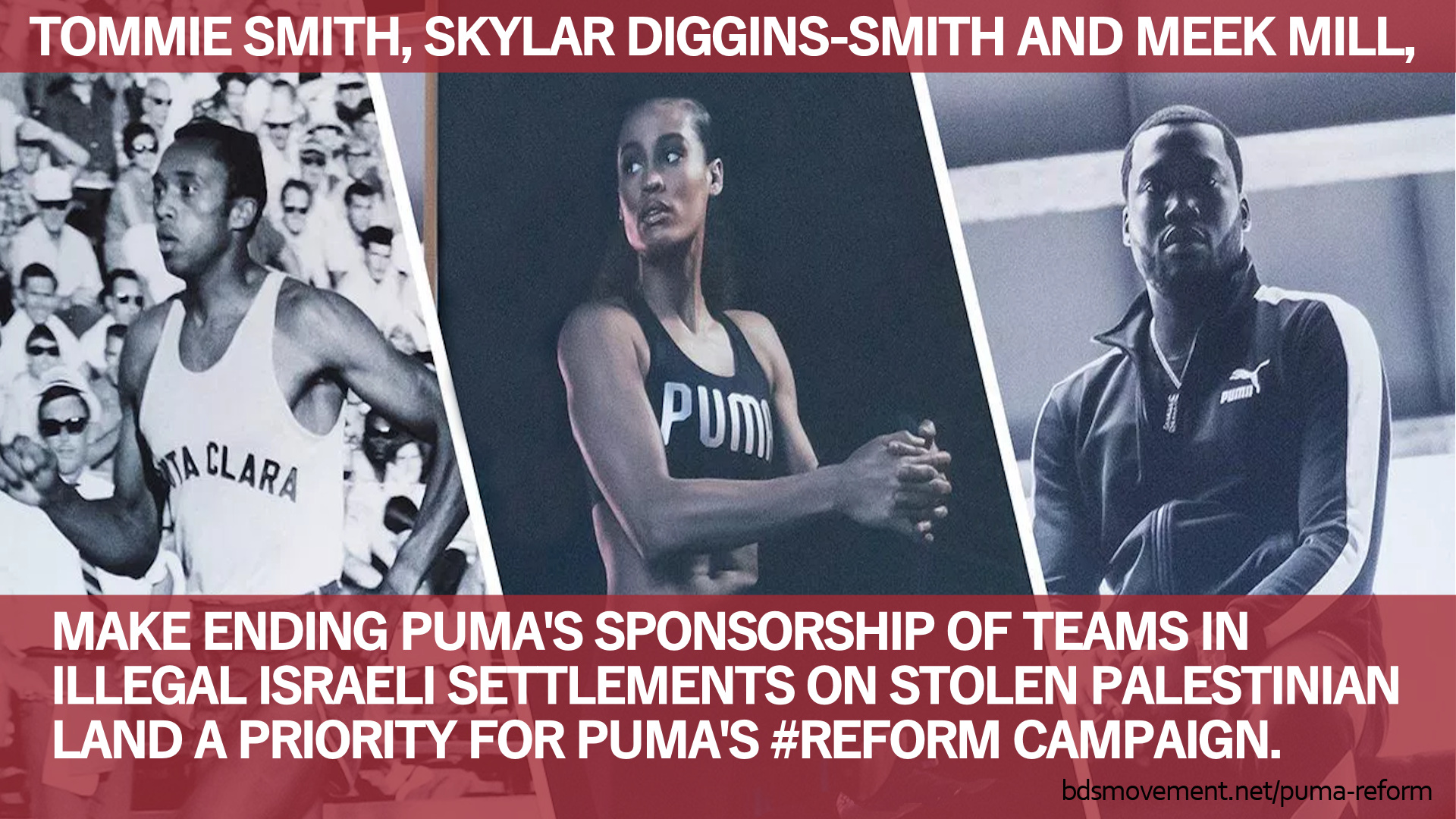 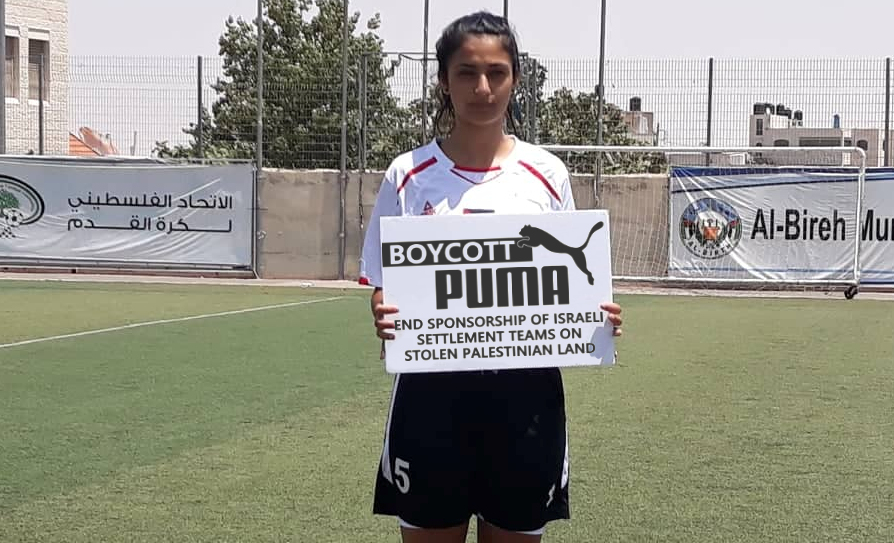 More than 200 Palestinian football clubs and sport associations sign a letter calling on Puma to end its sponsorship of the Israel Football Association due to inclusion of teams based in illegal Israeli settlements on stolen Palestinian land. 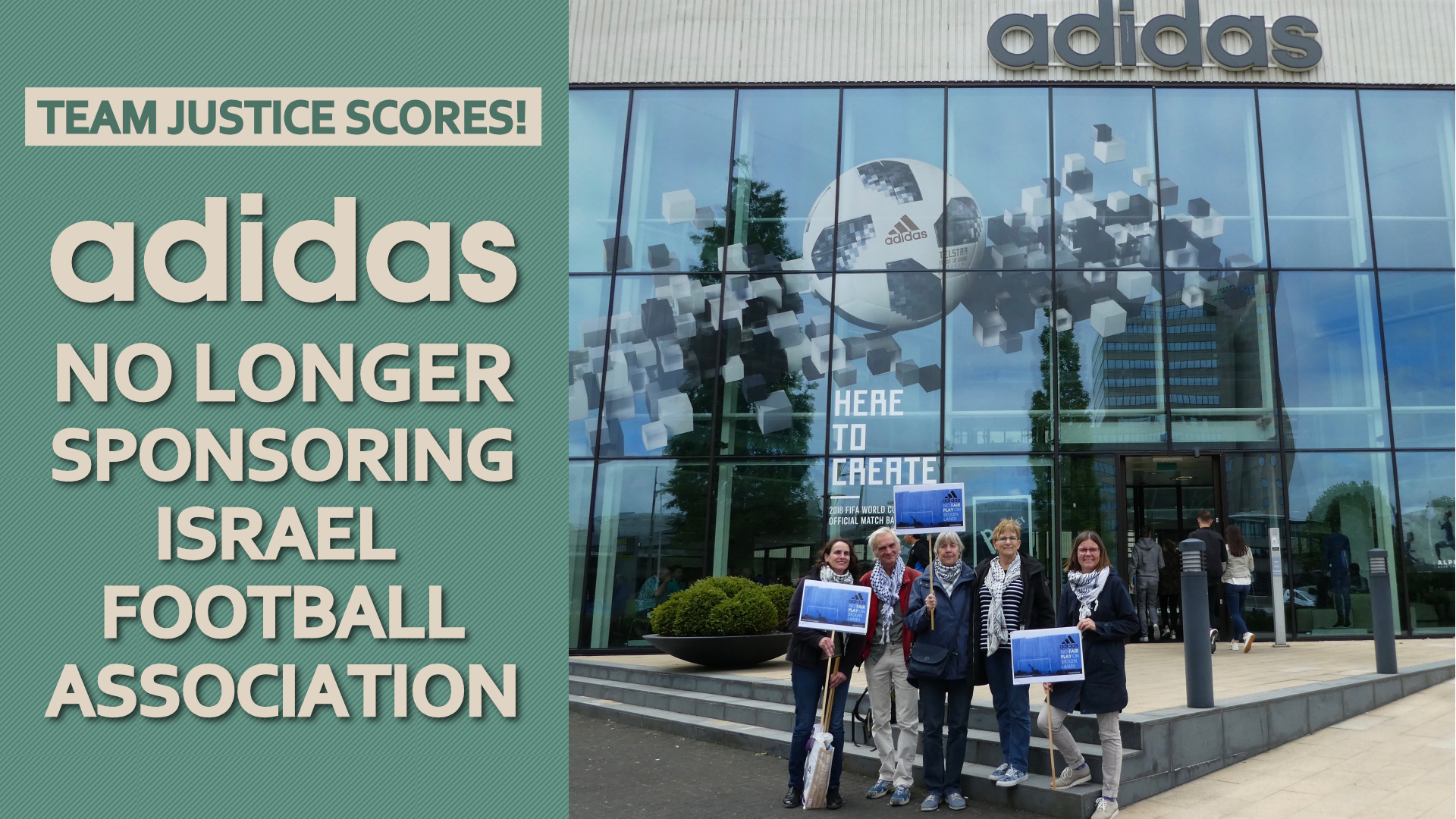 Adidas No Longer Sponsoring the IFA

In July 2018 it was announced that Adidas was no longer sponsoring the IFA following an international campaign and the delivery of over 16,000 signatures to Adidas headquarters, setting a precedent for the campaign.

Puma banks on its brand image. Grassroots campaigning and boycott actions can put pressure on the company to end its involvement in Israel’s violations of international law. Involve local sports associations in your campaign.

Palestinian sports clubs and athletes are calling for a boycott of Puma until it ends its sponsorship of the Israel Football Association, which includes teams in illegal settlements on occupied Palestinian land. Help us spread the word!

There are BDS partners all over the world who are campaigning to convince Puma to end its sponsorship of the Israel Football Association and raising awareness on Israel's attacks on Palestinian sports. Get active and connect with one now!
Read More

Join more than 120,000 people who have signed the petition by global advocacy organization SumOfUs urging PUMA to end its support for Israeli apartheid.

Let Puma know you will respect the call from Palestinian athletes to #BoycottPuma until it ends support for illegal Israeli settlements pushing Palestinians off their land.

Organize a protest at Puma offices

Deliver the letter from Palestinian clubs to Puma offices.

Organize a creative action at a Puma shop

Get creative. Organize a mock football match or sporting event at a Puma shop.

Use Puma’s store locator to find Puma branded shops in your city.

Engage the sports world to support the campaign

Ask fan clubs, sports associations, popular teams, anti-racist tournaments and sports figures to show their support for the campaign with a photo or social media post with the hashtag #BoycottPuma. Ask them to support the Palestinian call by pledging not to use Puma equipment.

Organize a talk or workshop

Involve local sports associations in a workshop or public talk on Israel’s attacks on Palestinian sports and the Puma boycott campaign. Get in touch for possible speakers: [email protected]

Monitor this list of Puma twitter accounts for information on public events. Urge organizers to refuse Puma sponsorship. If they fail to do so, organize a creative protest at the event.