April 14, 2022
/ By
Palestinian Campaign for the Academic and Cultural Boycott of Israel (PACBI)
/

As international sporting bodies enact swift sanctions against Russia over its illegal aggression against Ukraine, a growing number of athletes are choosing to make significant personal sacrifices by refusing to sportswash Israeli apartheid and denouncing the hypocrisy of selective action. 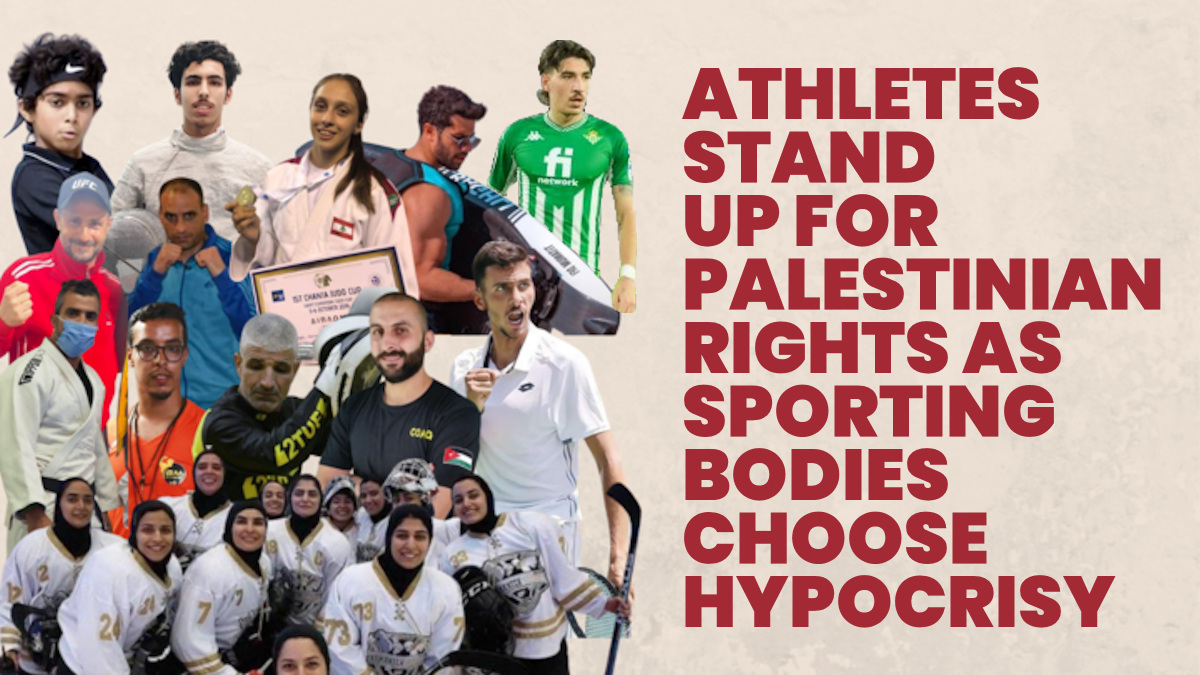 Sporting bodies governing football, tennis, swimming, judo, fencing, rugby, volleyball, athletics, basketball, cycling, rowing, boxing, gymnastics and others enacted swift sanctions against Russia over its illegal aggression against Ukraine merely weeks into its illegal invasion of Ukraine. Athletes using their platforms to stand in solidarity with the Ukrainian people have been cheered and celebrated by these bodies.

Yet, many of these same bodies, including FIFA, UEFA, UCI, Ironman, have not only ignored mounting calls to hold Israel to the same principles, but have also fined fan clubs and suspended athletes expressing solidarity with Palestinians and speaking out against Israel’s decades-old aggression and system of military occupation, settler-colonialism and apartheid.

“No one should accept any killings in the world, or oppression, but we’ve never been allowed to speak about politics in sports, but all of a sudden now it’s allowed. And now that it’s allowed I hope that people also look at oppression everywhere in the world. The Palestinians have been going through that for the past 74 years, but I guess because it doesn’t fit the narrative of the media of the West, we couldn’t talk about it. So now we can talk about Ukraine, we can talk about Palestine.”

“It’s really tough to see how we are so consumed only by this war, but there are many others that we have ignored. I don't know if it's because they look more like us, or because this conflict could affect us more directly, economically or in terms of refugees. But the war on Palestinians has been completely silenced. No one is talking about it. Yemen. Iraq. Now Russia will be excluded from the World Cup, but in the end, other countries have been doing the same things for many years, and we turned a blind eye. I find it callous that only certain cases are given importance, with a certain narrative repeated by the press. To be honest, I find it very racist and very uncaring, because people are losing their lives in many conflicts.”

During Israel’s escalation of violence against Palestinians last May, active men and women athletes and entire teams courageously expressed solidarity with Palestinians living under the brutal oppression of Israeli apartheid in unprecedented numbers.

The world of sports is speaking up. It’s time for the international governing bodies to take morally consistent action.

We call on all international sporting bodies to end their hypocrisy and suspend apartheid Israel until it respects international law and Palestinian rights.

We further call for compensation for all Arab and international athletes, teams and fan clubs that have been penalized for speaking up for Palestinian rights in sports.