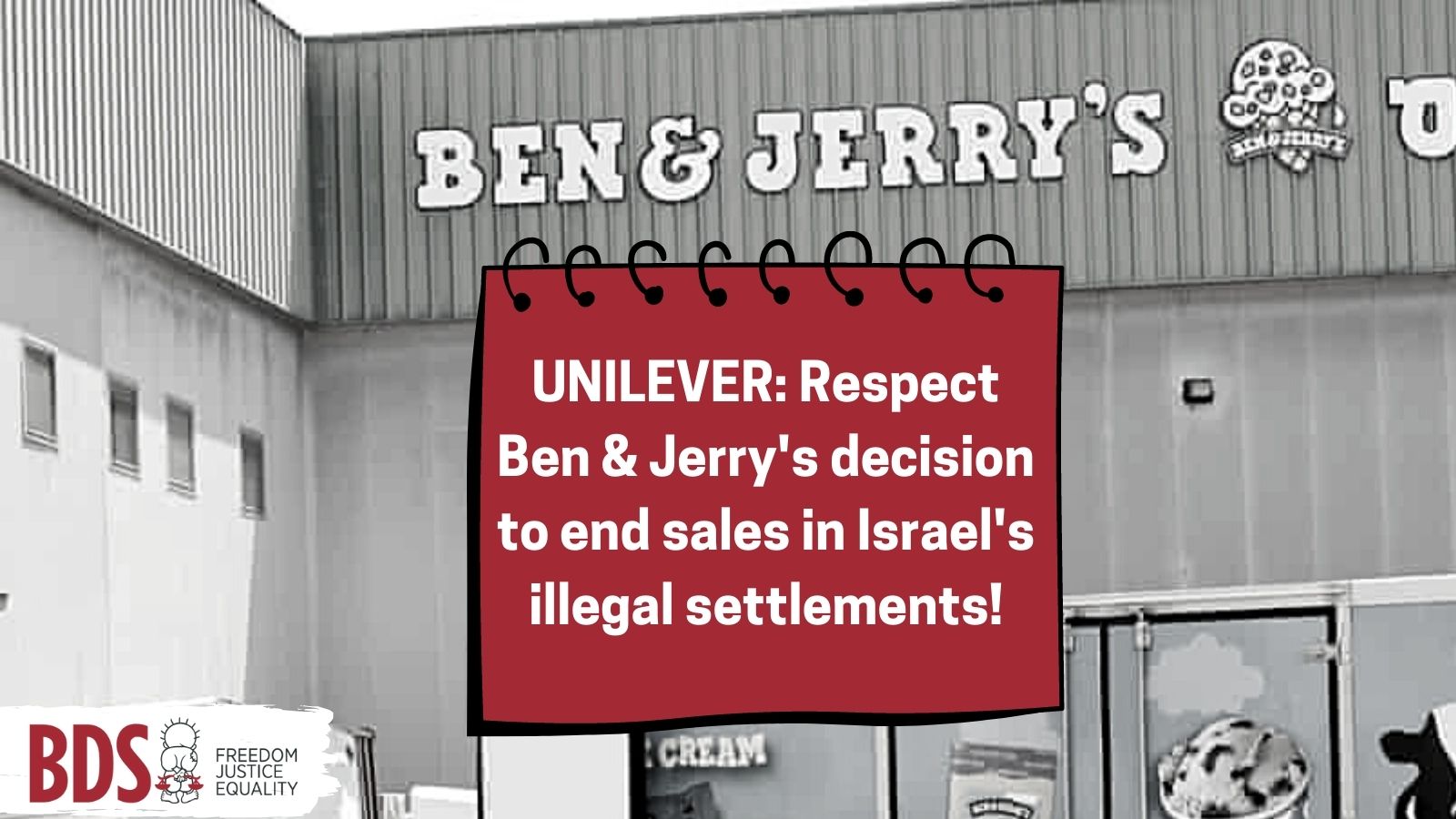 Last summer, ice cream company Ben & Jerry’s announced its decision to end business with settlements in the Israeli-occupied Palestinian territory, in harmony with the company’s progressive values. Palestinians, and the US-based Palestine solidarity movement, welcomed this announcement and stood with Ben & Jerry’s principled decision against the fierce legal and political backlash waged by apartheid Israel and its lobby groups in the US against it and its parent company, Unilever.

“Settler violence against Palestinians is part of the strategy employed by Israel’s apartheid regime, which seeks to take over more and more West Bank land. The state fully supports and assists these acts of violence, and its agents sometimes participate in them directly.”

No company should support or profit from this racist oppression. We commend Ben & Jerry's board decision to distance itself from it and call on Unilever to respect this decision, instead of bowing to Israeli pressure and threats.

Instead, Unilever’s CEO stated that Ben & Jerry’s is exploring a “new arrangement” for selling ice cream in Israel, without offering any evidence of any such arrangement. Ben & Jerry’s autonomous board has expressed no intention to adopt one either. He also said: "On subjects where Unilever brands don't have the expertise or credibility, we think it's best that they stay out of the debate,” implying that the legality of doing business with Israel’s illegal settlements is somehow debatable, and effectively berating Ben & Jerry’s autonomous board for daring to side with international law and basic principles of human rights. Unilever is thus attempting to bully Ben & Jerry’s independent board into maintaining business as usual with Israel, which by necessity includes selling to its illegal settlements, according to the company’s Israeli licensee.

It is no coincidence that Unilever’s latest attempt to appease apartheid comes on the heels of a new groundbreaking report by Amnesty International, documenting in meticulous detail Israel’s regime of apartheid against Palestinians and calling for global efforts to dismantle it. Apartheid is universally recognized as a crime against humanity. Amnesty has specifically called on corporations to cease business with Israel that is “contributing to or benefiting from the system of apartheid.”

Amnesty’s report, which reveals how Israel treats all Palestinians as “an inferior racial group,” has caused Israel to panic and to attempt to quash it before its release. It follows similar reports by Human Rights Watch and B’Tselem, cumulatively reminding Israel, and corporations that are complicit in its system of oppression, of the fate of apartheid in South Africa.

When anti-apartheid boycott and divestment campaigns became more effective in the 1980s, large corporations abandoned apartheid South Africa. Israel’s far-right government, headed by a fanatic former settlers’ leader, is now worried that in light of the slew of human rights reports designating Israel as an apartheid state, Ben & Jerry's morally-commendable decision will cause other companies to follow suit.

More and more people believe it’s important for companies that they support to share their values and put those values into practice in their businesses. Despite the threats and smears from Israel and its anti-Palestinian advocates in the US, Ben & Jerry’s sales and profits have shot higher since its brave and laudable decision to withdraw from doing business in Israel’s illegal settlements. It was the leading brand of ice cream in the US in 2021.

As we have learned from the struggle against apartheid in South Africa, it is untenable to do business with an apartheid state without contributing to maintaining the apartheid regime and profiting from it. Any attempt by Unilever to overturn Ben & Jerry’s decision would therefore be immoral and illegal. It would also likely trigger a worldwide grassroots boycott against Unilever and its many brands. Unilever has a chance to do the right thing and stand on the right side of history: against racial oppression and with freedom, justice and equality.