March 24, 2022
/ By
Palestinian Campaign for the Academic and Cultural Boycott of Israel (PACBI)
/

The MESA membership voted by 80%  to endorse the Palestinian call to boycott Israeli academic institutions complicit in Israeli apartheid. 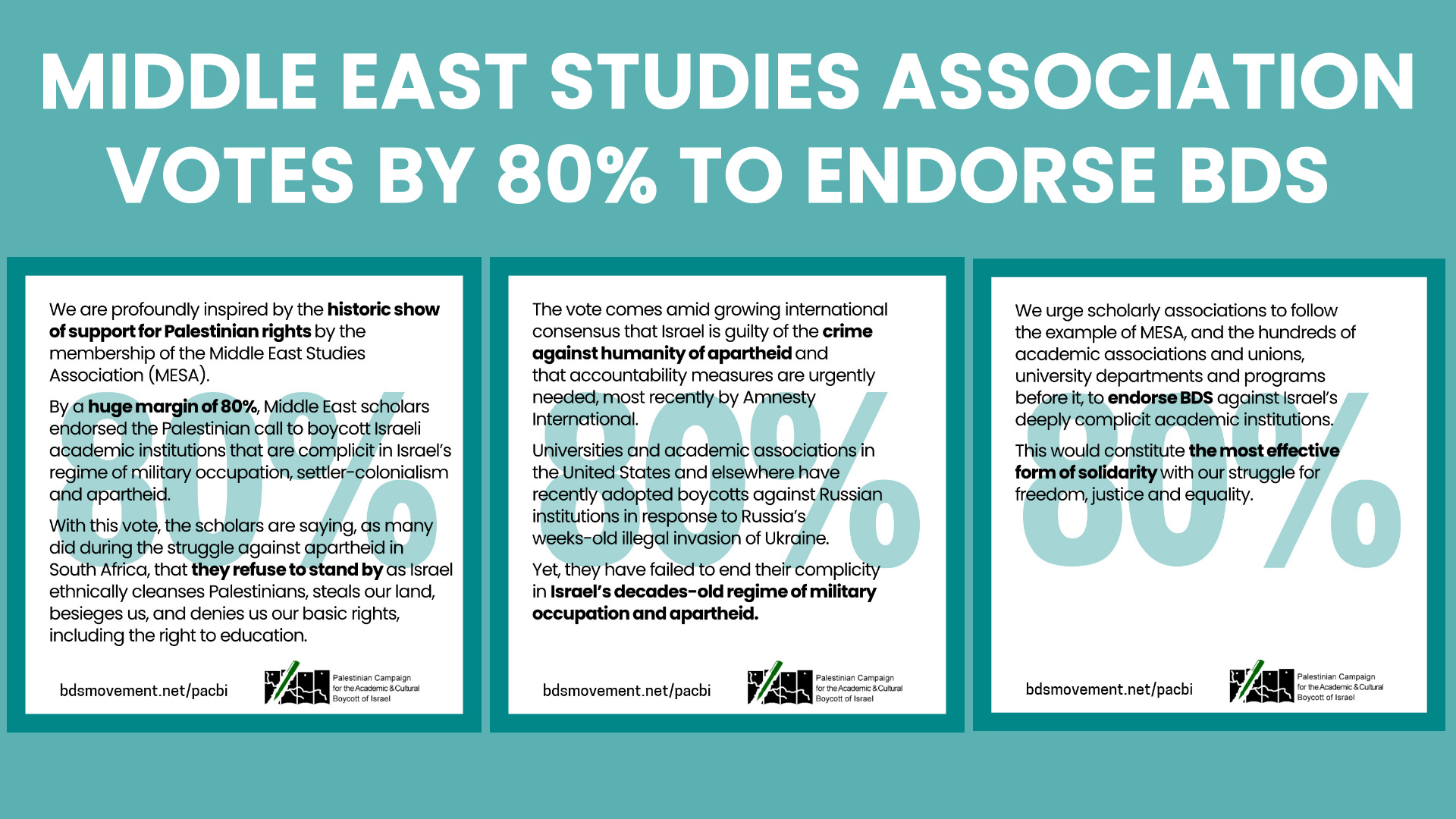 The Palestinian Campaign for the Academic and Cultural Boycott of Israel (PACBI) is profoundly inspired by the historic show of support for Palestinian rights by the membership of the Middle East Studies Association (MESA).

By a huge margin of 80%, Middle East scholars endorsed the Palestinian call to boycott Israeli academic institutions that are complicit in Israel’s regime of military occupation, settler-colonialism and apartheid.

With this vote, the scholars are saying, as many did during the struggle against apartheid in South Africa, that they refuse to stand by as Israel ethnically cleanses Palestinians, steals our land, besieges us, and denies us our basic rights, including the right to education.

The vote comes amid growing international consensus that Israel is guilty of the crime against humanity of apartheid and that accountability measures are urgently needed, most recently by Amnesty International.

Universities and academic associations in the United States and elsewhere have recently adopted boycotts against Russian institutions in response to Russia’s weeks-old illegal invasion of Ukraine. Yet, they have failed to end their complicity in Israel’s decades-old regime of military occupation and apartheid.

We urge scholarly associations to follow the example of MESA, and the hundreds of academic associations and unions, university departments and programs before it, to endorse BDS against Israel’s deeply complicit academic institutions. This would constitute the most effective form of solidarity with our struggle for freedom, justice and equality.

We are deeply inspired by @MESA_1966's historic vote (80%) to endorse the Palestinian call to boycott Israeli academic institutions complicit in Israeli apartheid.

We urge scholarly assocs to follow suit. BDS is the most effective form of solidarity with our liberation struggle. pic.twitter.com/uXZeGjfbGk