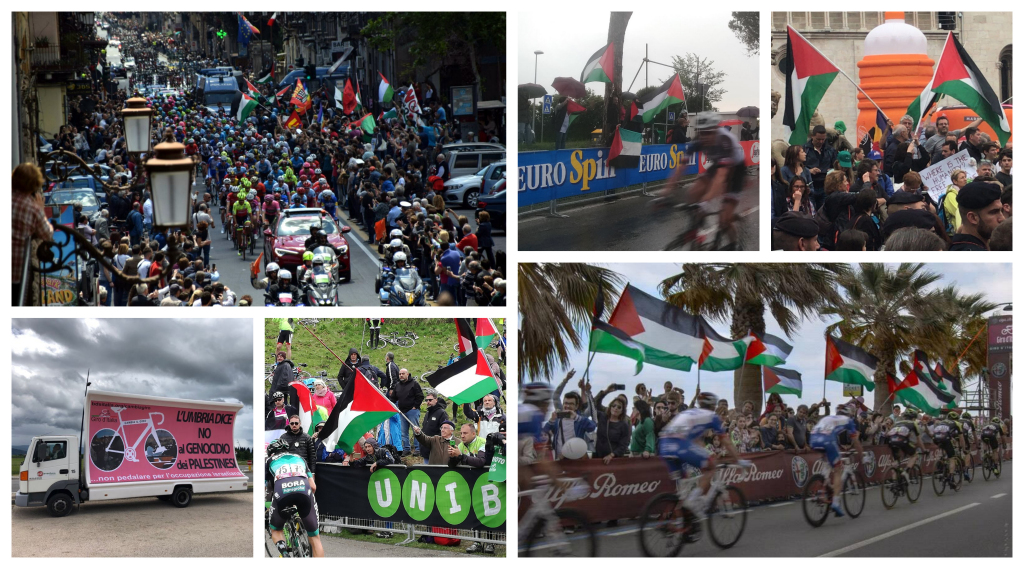 The Palestinian BDS National Committee (BNC) salutes the human rights organizations, grassroots movements and cycling and sports groups from around the world that contributed to the campaign calling for the Giro d’Italia cycling race to be relocated from Jerusalem and Israel.

We are inspired by the energy, creativity and dedication put into the campaign around the world. From Colombia to Malaysia, and across Europe in Belgium, France, Netherlands, Switzerland, UK and Italy, groups worked to raise awareness among the public and within institutions, broaden support for Palestinian rights and ensure mainstream media coverage of the campaign.

The Israeli government reportedly paid €10 million to host the Giro as part of its propaganda efforts, taking a page out of apartheid South Africa’s playbook and using sports to hide, or sports-wash, its decades-long military occupation and apartheid system imposed on the Palestinian people. By starting the race in Jerusalem, Giro d'Italia allied itself with the right-wing Trump administration, supporting Israeli government efforts to strengthen its illegal control of the city and falsely portray Jerusalem as its “unified capital.”

Despite Israel’s repression and threats, Palestinian cyclists and activists protested during the Giro stages in Israel, denouncing Giro’s role in sports-washing Israel’s ongoing denial of Palestinian rights, including the right to freedom of movement. 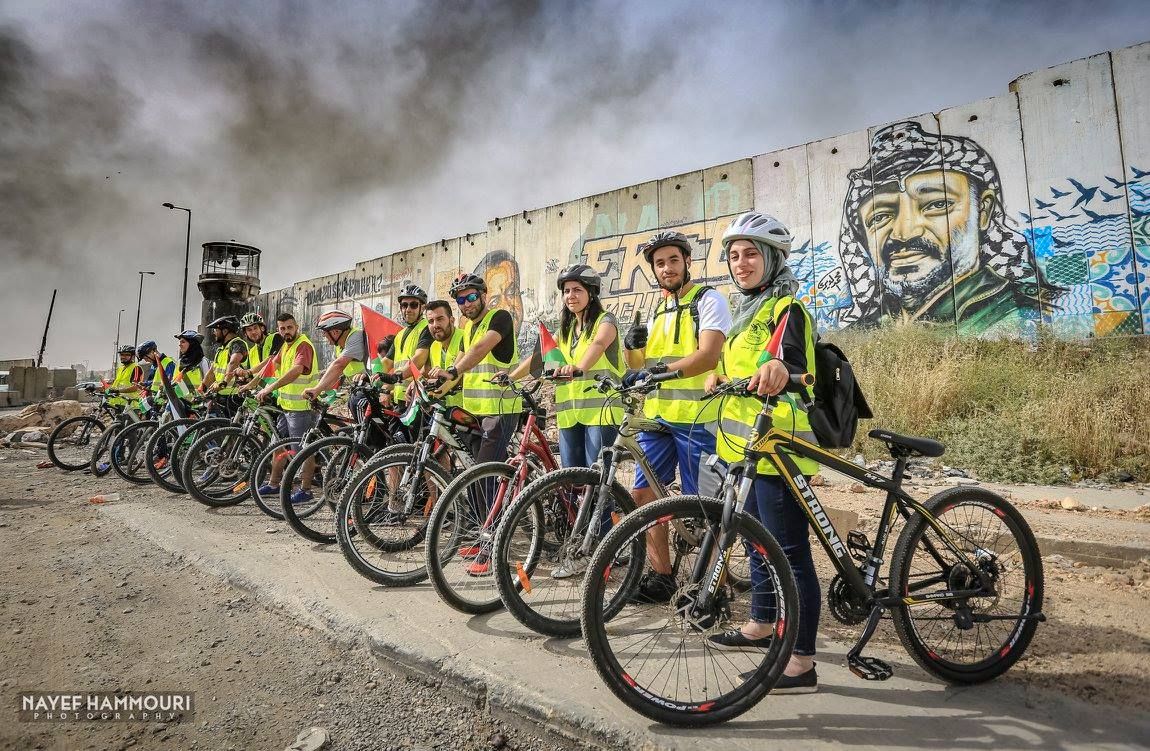 Support for the campaign on social media made #ShameOnGiro the most tweeted hashtag along with the race’s official hashtag.

In Italy, over 30 towns and cities protested at nearly all of the race’s 18 stages on home turf, denouncing Israel’s ongoing massacre in Gaza and 70 years of oppression of Palestinians.

Starting in Catania, on the island of Sicily, 150 activists briefly blocked the race, as a huge Palestinian flag was dropped from a building above the start and leaflets rained down on the public. 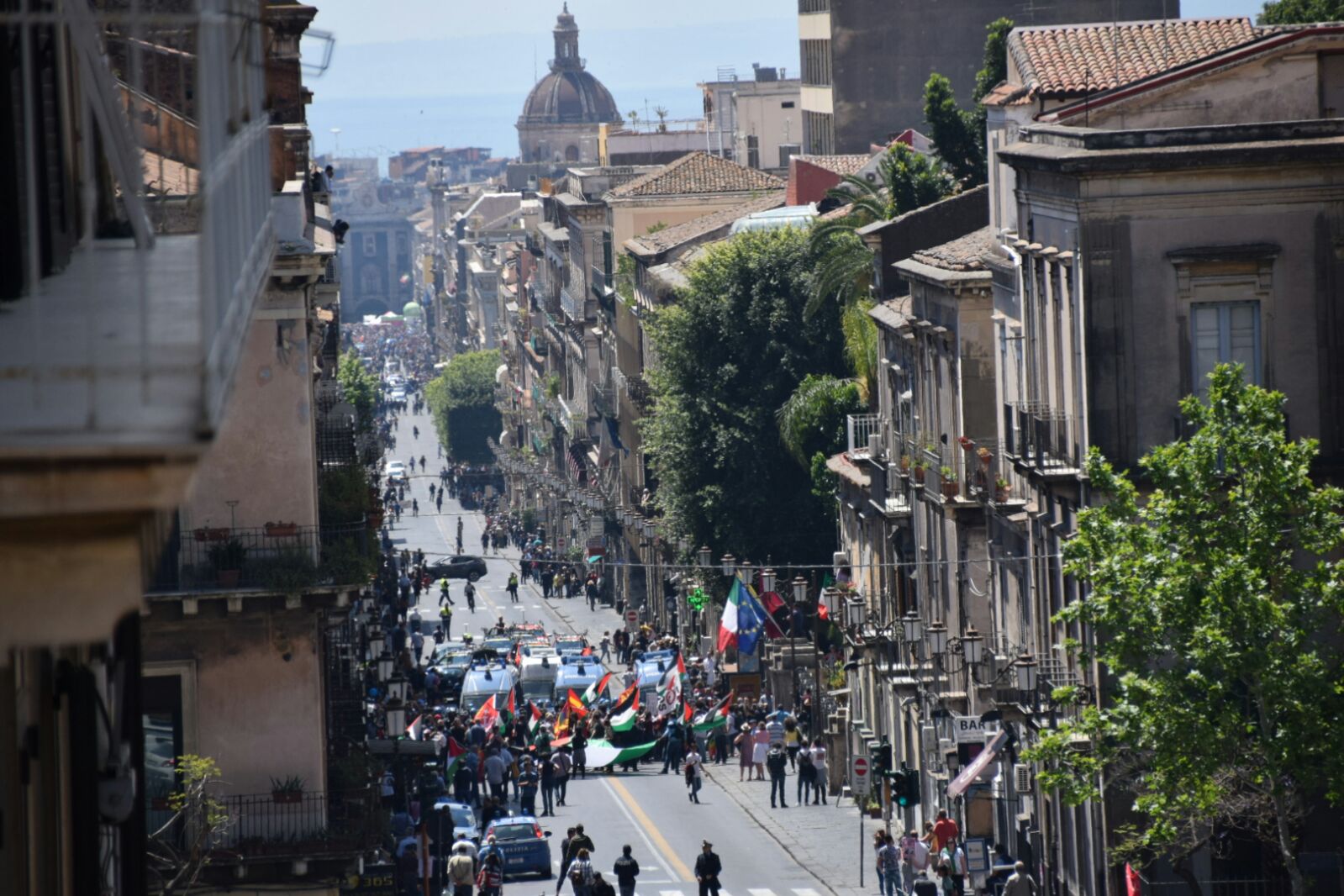 Creativity and strategic placement ensured Palestinian flags were visible along the Giro route not only to the cyclists, including Israel’s government backed team, but also during the television coverage of the race, from south to north. 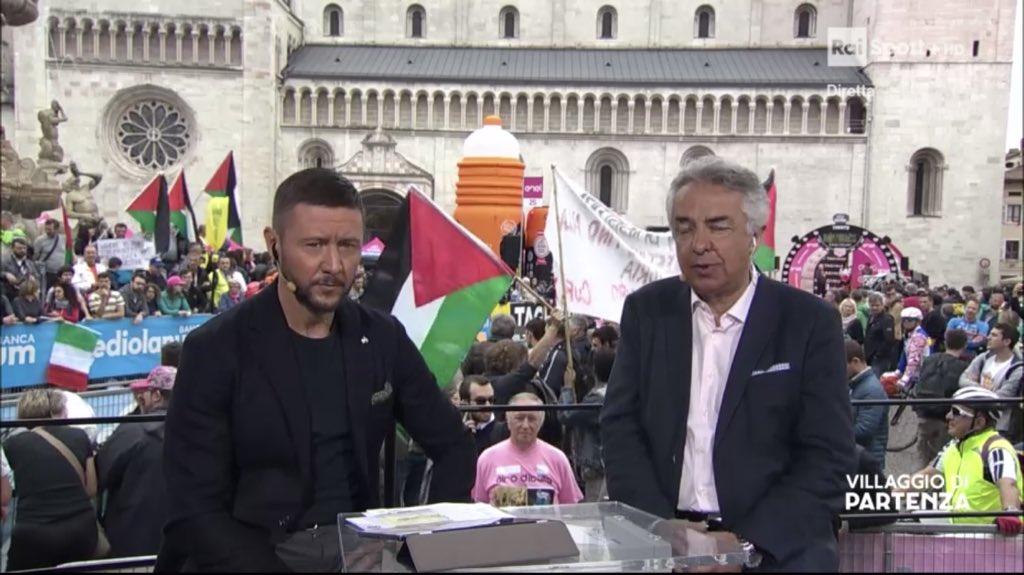 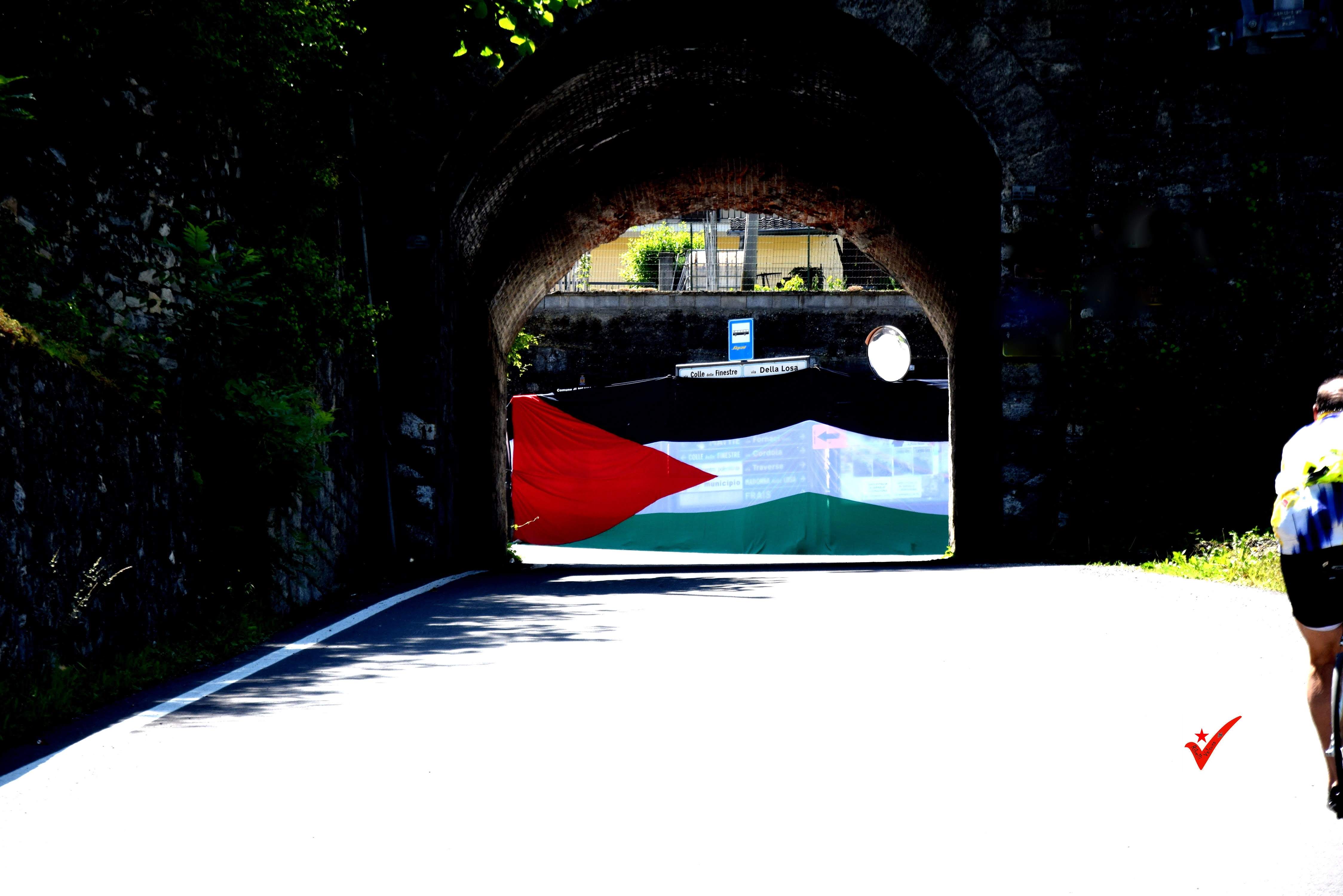 Banners were hung from balconies in small towns and messages supporting Palestinian rights were painted on the roads in the mountains. In Assisi, a large truck with the campaign graphics drove around the Umbrian city for two days. 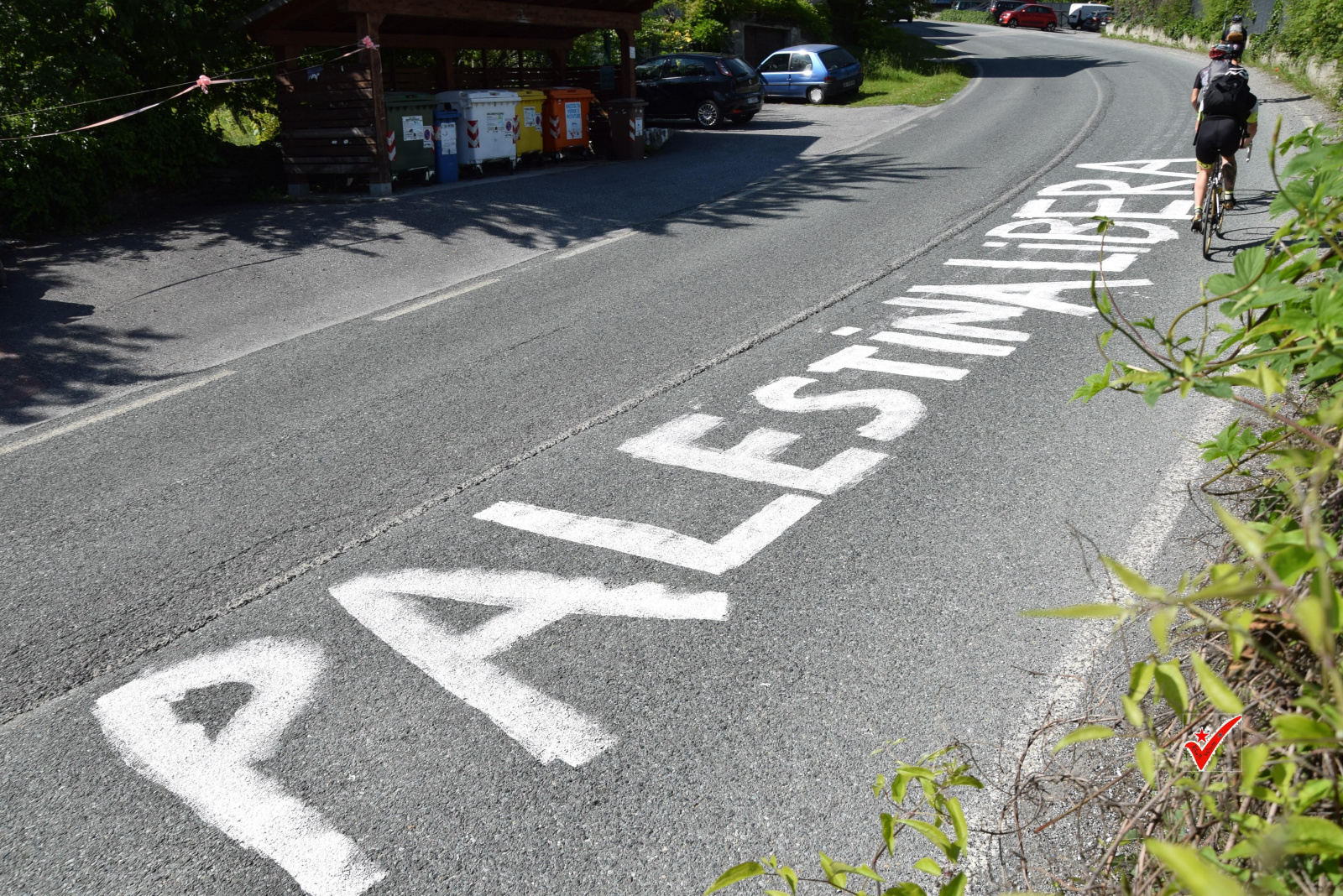 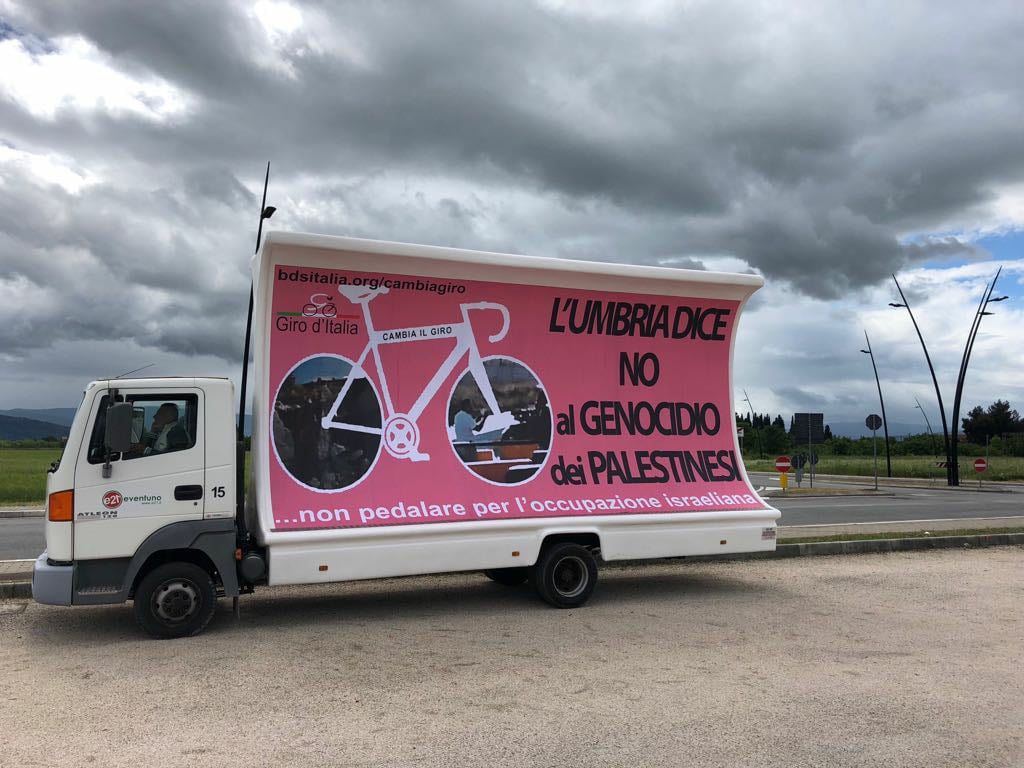 The Giro concluded on May 27 in Rome, where police had declared a “green zone,” forbidding protests anywhere in the city center. Around 200 activists instead rallied to declare it a “green, red, white and black zone,” waving Palestinian flags as cyclists passed by during the ten laps around the city. A group of activists staged a die-in on the race route, recalling the over 100 Palestinians killed by Israeli snipers in Gaza.

The nonviolent protests were met with a large police presence throughout Italy. In both Catania and Rome, the police violently repressed protesters. Police in riot gear injured a number of protesters in Rome, where seven activists were detained and at least three are facing trial.

We stand in solidarity with those injured, detained and facing legal consequences for standing alongside us in our struggle for freedom, justice and equality.

Our movement grows stronger each day thanks to the dedication of conscientious supporters around the world. Our collective stand for justice will not be stopped. We reiterate our calls on Union Cycliste Internationale (UCI) to exclude Israel's cycling team from international competitions due to its illegal participation in races on stolen Palestinian land.