September 26, 2017
/ By
Palestinian Campaign for the Academic and Cultural Boycott of Israel (PACBI)
/
Italy

The Giro d’Italia organizers claim the cycling race is all about sports and has nothing to do with politics. However, as the irrefutable evidence below shows, in return for millions of dollars in sponsorship the Giro d'Italia is actively aiding the Israeli government in falsely portraying occupied East Jerusalem as part of Israel and its unified capital, is working with companies active in illegal Israeli settlements, and is deploying images and messages that give a carefully-designed deceptive impression that whitewashes Israel’s military occupation and apartheid policies against Palestinians.

Images on the Giro d'Italia's official Facebook, Twitter and Instagram accounts show part of the Old City of occupied East Jerusalem, with some of its most prominent Palestinian holy sites, especially the golden Dome of the Rock mosque and the church of St. Mary of Agony, some under the banner, "Welcome Israel - Big Start 2018." 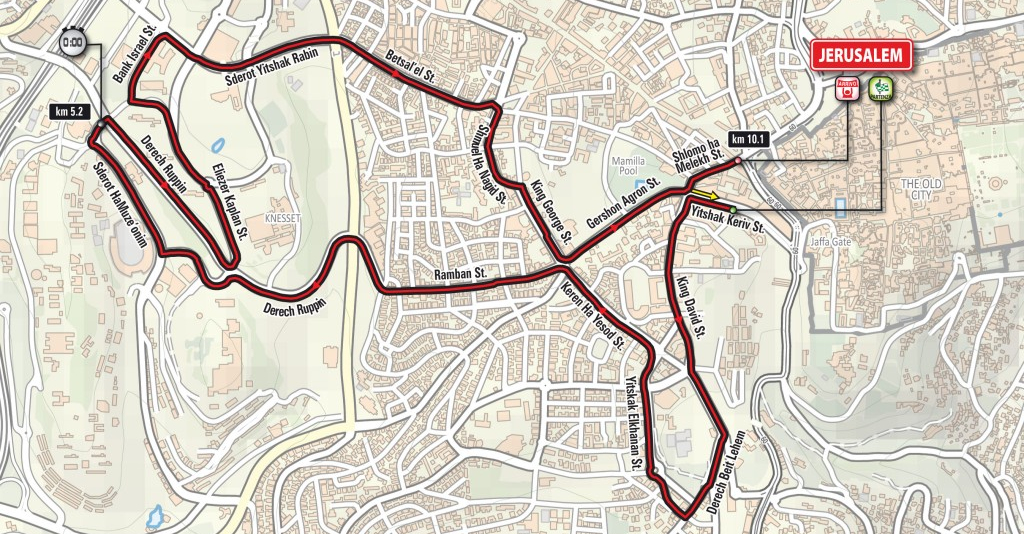 Scenes of the Old City in this official video, produced by the Israeli Tourism Ministry and published on the Giro d'Italia Youtube channel, further entrench the false presentation of occupied East Jerusalem as part of a unified Jerusalem that is the capital of Israel. Again, the large banner “Jerusalem” is placed precisely on occupied East Jerusalem territory on the map, encroaching as well on the Old City. 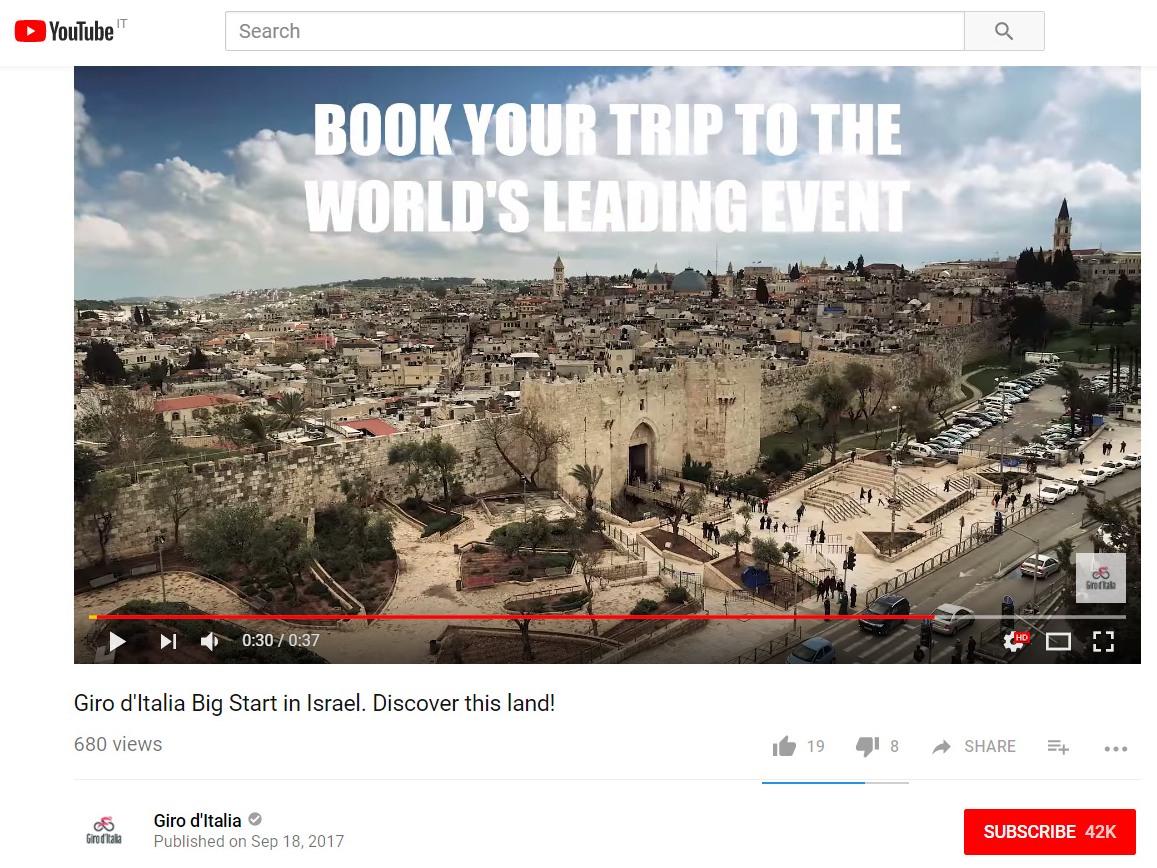 Among the clients of the Israeli production company for the event, Comtec Group, are not only Israeli government departments that have a long history of involvement in Israel’s serious violations of international law but also the Golan Heights Winery, which illegally operates in the occupied Golan Heights.

The map in the official logo of the Giro d’Italia Big Start shows transit from Jerusalem to Haifa (dashed line) along Highway 1 through the Latrun enclave in the occupied Palestinian territory.The fact that the occupied Palestinian West Bank and Gaza Strip are not marked as such and are simply delineated with a dotted line gives the false impression that they are part of Israel. So does the inexplicable inclusion in the map of the occupied Syrian Golan Heights. 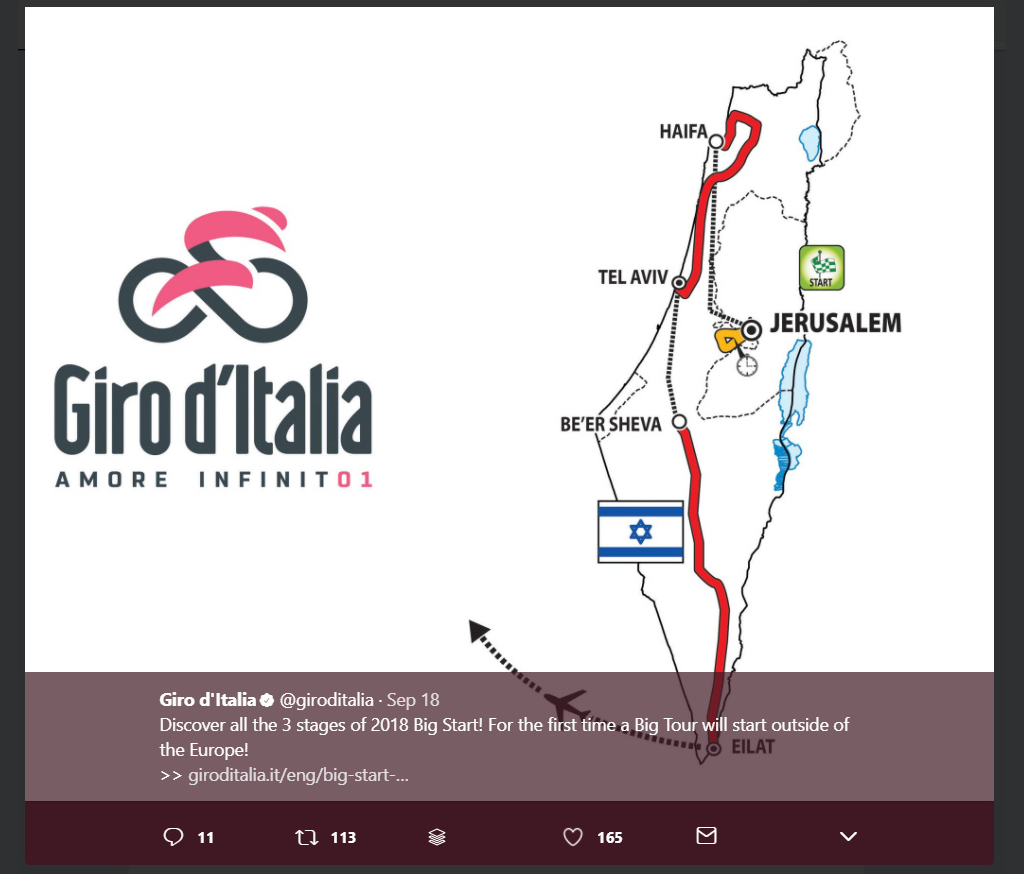 “We are proud to host one of the biggest and most prestigious sports events in the world, and the biggest sporting event ever held in Israel, here in the city of Jerusalem. Hundreds of millions of viewers around the globe will watch as some of the world’s best cyclists ride alongside the walls of Jerusalem’s ancient Old City and our historic sites. Our message to the world is clear: Jerusalem, the capital of the State of Israel, is open to all.”

The words “the capital of the State of Israel” were removed from his quote on the Giro web site in an attempt to hide statements that clearly run counter to the Italian government’s policy and international consensus.

The fact that this particularly racist and colonial municipality is partnering with Giro d’Italia speaks volumes on the complicity of this supposedly “sports only” race in whitewashing Israel’s military occupation and apartheid policies. The Israeli municipality of Jerusalem, after all, has played a major role in the commission of grave violations of Palestinian human rights, including home demolitions and the extensive construction of illegal Jewish-only settlements through the gradual forcible displacement of indigenous Palestinian communities from and around occupied East Jerusalem--a war crime under international law.

Further enhancing the false projection of occupied East Jerusalem as part of Israel, the official description of the Jerusalem stage of the race states: 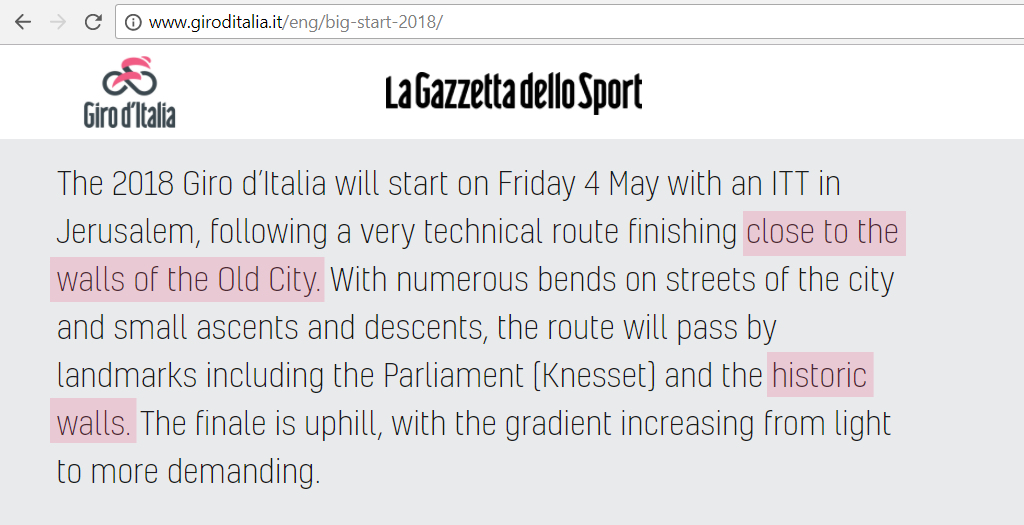 “The 2018 Giro d’Italia will start on Friday 4 May with an ITT in Jerusalem, following a very technical route finishing close to the walls of the Old City. With numerous bends on streets of the city and small ascents and descents, the route will pass by landmarks including the Parliament (Knesset) and the historic walls. The finale is uphill, with the gradient increasing from light to more demanding.” [Emphases added]

Commenting on the Giro d’Italia announcement ceremony, Italy’s top sports paper, owned by race organizers RCS MediaGroup, states that the Jerusalem stage will “arrive near the walls of the old city” and will go by “some symbolic places such as Parliament (Knesset) and the historic walls.”

Italy’s top newspaper, also owned by race organizers RCS MediaGroup comments: “An individual time trial along the Old City of Jerusalem, departing and arriving near the Jaffa Gate or Tower of David Gate.” The use of the Israeli colonial term, “Tower of David,” to describe a 17th century Muslim Palestinian minaret by this paper is a form of complicity in Israel’s illegal cultural appropriation and colonization of Palestinian heritage.