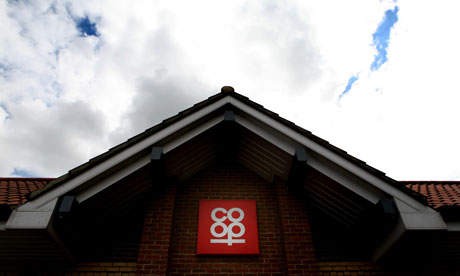 The Co-operative Group stresses that its move is not an Israeli boycott and that it will use other suppliers in the country that do not source from illegal settlements.

The Co-operative Group stresses that its move is not an Israeli boycott and that it will use other suppliers in the country that do not source from illegal settlements. Photograph: Graham Turner for the Observer

The Co-operative Group has become the first major European supermarket group to end trade with companies that export produce from illegal Israeli settlements.

The UK's fifth biggest food retailer and its largest mutual business, the Co-op took the step as an extension of its existing policy which had been not to source produce from illegal settlements that have been built on Palestinian territories in the West bank.

Now the retail and insurance giant has taken it one step further by "no longer engaging with any supplier of produce known to be sourcing from the Israeli settlements".

The decision will hit four companies and contracts worth some £350,000. But the Co-op stresses this is not an Israeli boycott and that its contracts will go to other companies inside Israel that can guarantee they don't export from illegal settlements.

Welcoming the move, Palestinian human rights campaigners said it was the first time a supermarket anywhere in the west had taken such a position.

A spokesperson for the Palestinian Union of Agricultural Work Committees, which works to improve the conditions of Palestinian agricultural communities, said: "Israeli agricultural export companies like Mehadrin profit from and are directly involved in the ongoing colonisation of occupied Palestinian land and theft of our water. Trade with such companies constitutes a major form of support for Israel's apartheid regime over the Palestinian people, so we warmly welcome this principled decision by the Co-operative. The movement for boycotts, divestment and sanctions (BDS) against Israel until it complies with international law is proving to be a truly effective form of action in support of Palestinian rights."

Boycott campaigns against Israel are routinely denounced by Israeli officials as part of a drive to "delegitimise" the Jewish state. A law, passed last July, allows those that call for economic, cultural or academic boycotts against Israel, its institutions or areas under its control to be sued.