Skip to main content
In the News
This article is reposted from
Independent Jewish Voices Canada (IJV)
, click here to read the original article. 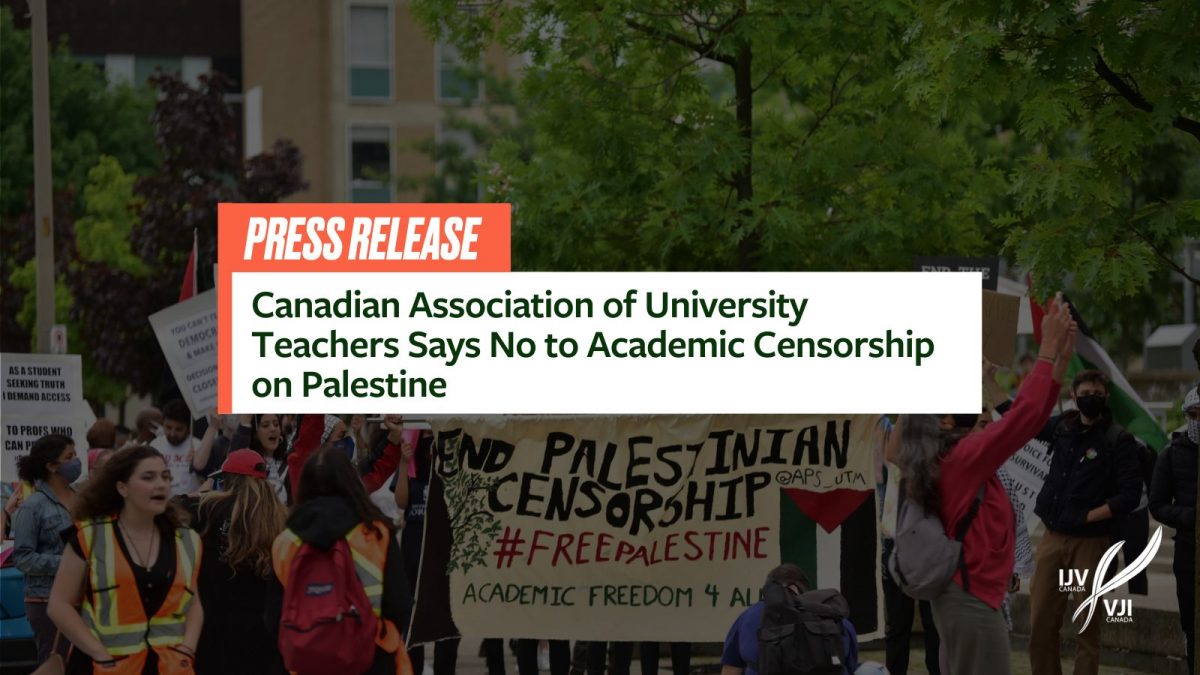 Independent Jewish Voices Canada (IJV) and the Academic Alliance Against Antisemitism, Racism, Colonialism & Censorship in Canada (ARC) applaud the Canadian Association of University Teachers (CAUT) for adopting a motion today to protect academic freedom on Israel-Palestine. The motion takes aim at the International Holocaust Remembrance Alliance working definition of antisemitism (IHRA-WDA), which has been the subject of protest for equating criticisms of the state of Israel with antisemitism. It was moved by the Association of Academic Staff of the University of Alberta (AASUA) and seconded by the Syndicat général des professeurs et professeures de l’Université de Montréal (SGPUM). As IJV has demonstrated, the IHRA definition has been used dozens of times to silence or censor academics, students and human rights activists.

The motion comes amidst aggressive lobbying efforts by pro-Israel advocacy groups in Canada to have the definition adopted by all levels of government, as well as by public institutions such as universities, colleges and school boards. In rebuke of these efforts, CAUT has stated that it “opposes” the adoption of the IHRA definition by Canadian academic institutions, “supports the academic freedom of its members and recognizes the need to safeguard the rights of scholars to critique all states, including the state of Israel, without fear of outside political influence, cuts to funding, censorship, harassment, threats, and intimidation.”

“Today’s motion adopted by CAUT is a crucial action to protect academic freedom and critical scholarship in Canada,” says Corey Balsam, IJV’s National Coordinator. “We must do all we can to fight antisemitism on university campuses, but the IHRA definition is not the way to go. This definition has shamefully been used as a weapon against Palestinians and other people of colour, rather than used to fight actual antisemitism.”

Following its participation in the Malmö International Forum on Holocaust Remembrance and Combating Antisemitism in October, the Canadian government made a pledge to “continue to enhance the adoption and implementation of the IHRA working definition of antisemitism”. This controversial definition has been hotly contested by IJV and other anti-racist organizations in several Canadian provinces and municipalities.

“If the IHRA definition were to be adopted by universities, entire fields of research, cutting-edge paradigms, and many of the world’s leading thinkers could effectively be prohibited,” suggests Greg Bird, Associate Professor at Wilfrid Laurier University and ARC National Coordinating Committee Member. “I cannot stress enough how catastrophic this would be for critical scholarship and teaching in Canada.”

CAUT is the national voice for academic staff representing 72,000 teachers, librarians, researchers, general staff and other academic professionals at some 125 universities and colleges across the country.  To date, over 650 Canadian academics and over 170 Jewish-Canadian academics have signed petitions against the IHRA definition, 32 faculty associations and academic unions in Canada have also taken positions against it.

Earlier this year, CAUT called for a rare academic censure of the University of Toronto after their International Human Rights Program revoked a job offer to Dr. Valentina Azarova following pressure exerted by a pro-Israel donor and tax court judge due to her support for Palestine. Dr. Azarova’s job offer was ultimately reinstated – a testament to the power of collective organizing for academic freedom.

“CAUT’s resolution provides much needed leadership on the question of the IHRA WDA, which is a clear threat to academic freedom particularly targeting racialized faculty and students who are critical of the Israeli state,” adds Mark Ayyash, Associate Professor at Mount Royal University and ARC National Coordinating Committee Member. “This week, CAUT has sent a clear message: universities value academic freedom and are willing to stand up to government overreach.”