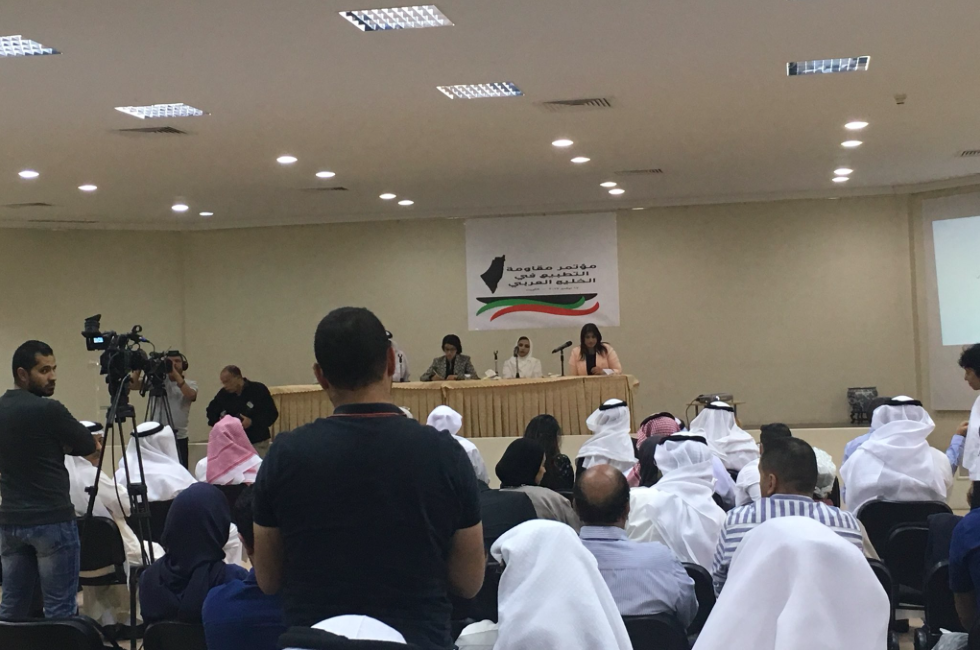 November 24, 2017 — Last week, BDS Gulf held its first regional anti-normalization conference in Kuwait City, with a broad participation of speakers, organizations, activists and political figures from the entire Gulf region. The conference, which was followed by workshops focused on campaign strategies and a practical regional action plan, made several recommendations regarding anti-normalization and activating BDS campaigns in the Gulf summarized below.

In response to G4S’ complicity with Israel’s regime of oppression and its active involvement with the Israeli police forces, the conference called for launching a unified regional campaign targeting G4S’ contracts and bids in the Gulf Cooperation Council (GCC) countries.

G4S is considered a strategic target for BDS Gulf as it plans to build on the milestone achieved when the Kuwaiti Public Institution for Social Security (PIFSS) divested its shares from the company last year. Additionally, G4S has lost dozens of contracts in Jordan and Lebanon over the past two years, giving the campaign in the Gulf a more fertile ground to build on the successes of the #StopG4S campaign in the Arab World.

Despite the sale of its Israeli affiliate, which continues to trade under the “G4S Israel” name and uses the G4S logo, the company still holds 50% of Policity Ltd. which was contracted by the Israeli police to build and operate Israel’s National Police Academy, inaugurated in January 2015. Located in a 55-acre plot in Beit Shemesh, the National Police Academy combines all of Israel’s police training under one roof, replacing 20 facilities throughout the country.

Policity, the company owned and operated by G4S, is responsible for at least 40% of the training instruction of Israeli police, amounting to about 40,000 hours in the current contract. The training provided by National Police Academy includes crowd control, house raids, interrogation techniques, target shooting and undercover operations — repression tactics aimed exclusively at Palestinians.

Additionally, in July, video evidence showed cars with the G4S logo supplying the security systems used by the Israeli government to restrict Palestinian access to the al-Aqsa mosque. FST Biometrics, the company that was expected to supply the smart surveillance cameras that Israel then planned to install at the doors of al-Aqsa Mosque, is a partner of AMAG Technology, a company owned by G4S.

The BDS Gulf conference, which was welcomed by the speaker of the Kuwaiti parliament and attended by a number of parliamentarians from several GCC countries, called for the adoption of national laws and regulations that would require private entities and public institutions alike to exclude companies complicit in Israel’s regime of occupation, colonialism and apartheid from bids and contracts.

Such companies include G4S, Alstom, Hyundai Heavy Industries, HP, among others, especially those that are anticipated to be listed on the United Nations High Commissioner for Human Rights’ database of companies involved in Israel’s illegal settlement regime in the occupied territory.

The conference called upon public and sovereign funds, akin to the PIFSS in Kuwait, to divest their shares from international companies that are targeted by the BDS movement for their complicity in the occupation. Moreover, the conference recommended the publication of an investment screen, including a list of companies that are involved in Israel’s violations of Palestinian rights, to guide institutions as to which companies should be considered for divestment.

On a broader level, the conference was widely regarded as a timely step to reaffirm the massive popular support in GCC countries for Palestinian rights and strengthening public and popular opposition to any possible change of policies towards normalizing relations with Israel in the region.

The BDS Gulf conference reminded GCC states of their legal obligations to hold Israel to account through the imposition of sanctions including by ending military trade and actively seeking the expulsion of Israel from the Inter-Parliamentary Union (IPU), FIFA and other international forums.