G4S is a British security company that helps Israel run checkpoints, a police training centre and prisons where Palestinian political prisoners are held. In response to international pressure, G4S has announced that it may sell its Israeli operations. However, G4S has a track record of breaking such pledges so the Stop G4S campaign continues. 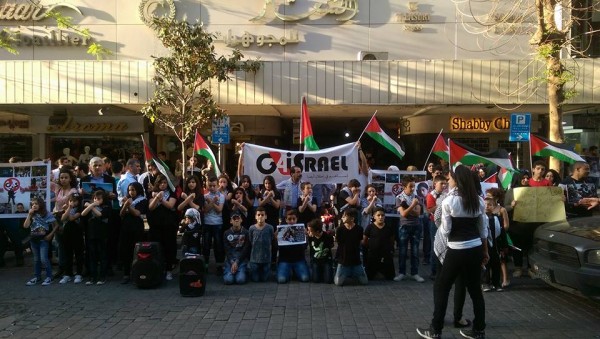 Campaigners in Beirut hold a #StopG4S protest to mark Palestinian political prisoners day on April 17 2016. The Stop G4S campaign is now active in more than a dozen countries.

The Public Institution for Social Security (PIFSS) in Kuwait has decided, as reported in the Kuwaiti media, to divest its funds from G4S, a company that is profiting from the Israeli occupation and has a notorious record of human rights abuses. The decision comes following calls from BDS Kuwait and the Palestinian BDS National Committee (BNC), the largest coalition in Palestinian civil society, on PIFSS to divest from G4S.

Earlier in May, a parliamentary inquiry by Kuwaiti MP Faisal Al-Duwaisan directed to the Ministry of Finance was submitted raising questions about the nature of the shares that PIFSS held in G4S, a company that is profiting from Israeli international law violations committed against the Palestinian people. In his response to the parliamentary inquiry, the Kuwaiti Minister of Finance, who is also the Chairman of the Board of Directors for the PIFSS, confirmed that PIFSS has sold all its shares in G4S.

Guman Mussa, BDS Campaigns Coordinator in the Arab World, welcomed the new victory against G4S saying: “The decision of PIFSS in Kuwait to respond to a call made by Palestinian civil society and BDS Kuwait affirms that the Palestinian cause is part and parcel of the consciousness of the Kuwaiti people. Kuwait shines a glimmer of hope against normalization with Israel’s regime of occupation and settler-colonialism”.

G4S, a British-Danish security company that operates in more than 125 countries around the world, had announced in March its intention to exit the Israeli market following mounting global pressure and financial losses incurred as a result of BDS campaigns. Nonetheless, the company has gained an ill-famed reputation not only due to the human rights abuses in which it is involved but also for repeatedly contradicting its promises to divest from the Israeli occupation. This has led BDS campaigners to accuse the company of dishonesty and deception. Since the March announcement, BDS campaigns against G4S have been escalating globally, not least in the Arab world.

Mussa added: “We shall continue with our campaigns against G4S both globally and in the Arab world due to its complicity in crimes committed by the occupation, knowing that BDS activists – from Kuwait, Lebanon and Jordan to Egypt and Morocco – are escalating the pressure against the company.”

“G4S clients in the region are responding positively to the campaign. Many have assured us that they are seriously exploring the possibility of severing their relationship with G4S due to its role in Israeli violations of Palestinian rights.”

Commenting on the news, BDS Kuwait stated: “Kuwait has always been and still is at the forefront of supporting the Palestinians in their struggle for freedom, justice and self-determination. The decision by PIFSS rightly distances Kuwait from any suspicion of involvement with companies profiting from occupation and reaffirms Kuwait’s commitment to the rights of the Palestinian people as well as our responsibility as Kuwaitis to combat normalization”.

Mussa concluded: “G4S claimed it was withdrawing from Israel ‘for entirely commercial reasons’, but that is the very logic of the BDS campaigns for corporate accountability. As was the case at the height of the international boycott of apartheid South Africa, BDS pressure, as this latest success in Kuwait shows, is making some of the world’s largest corporations realize that profiting from Israel’s regime of oppression is becoming commercially untenable”.

– G4S announced in March 2016 that it will end all its contracts with the Israeli military, prison services, police and settlements. The Financial Times reported that G4S was “extracting itself from reputationally damaging work.”

– If BDS compels G4S to follow through with its announcement by ending all forms of complicity in Israel’s violations of international law, G4S would become the fourth multinational to abandon the Israeli market, in less than a year, due to heavy losses and/or reputational risk.

– In September 2015, French corporate giant Veolia set the trend by selling off all of its businesses in Israel after losing tenders and contracts worth billions of dollars following a seven-year BDS campaign against its role in illegal Israeli settlement projects.

– French telecommunications giant Orange announced earlier this year the termination of its franchise relationship with Israeli Partner Communications, after intense BDS pressure in France and Egypt.

– In a related major development, the $20-billion pension fund of the United Methodist Church declared in January 2016 the five largest Israeli banks off limits for investment and divested from the two that it held in its portfolios.

– The Israel Export Institute has revealed that Israel’s exports in 2015 have dropped by 7% over 2014.

– Foreign direct investment in Israel dropped by 46% in 2014 as compared to 2013, according to a UN report. One of the report’s authors admitted that BDS played a key role in this sharp drop.

– In addition to abandoning its Israeli contracts, G4S announced in March it was selling its mass incarceration businesses that operate youth detention centers in the UK and the US. It is accusedby campaigners of involvement in racist and abusive practices.