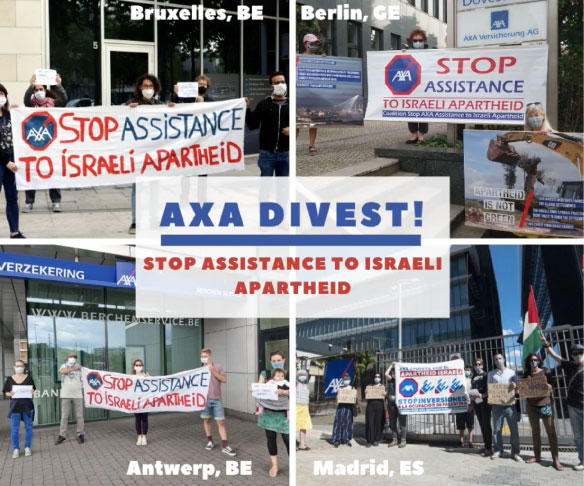 Nearly 5,000 people from around Europe wrote to AXA representatives urging their support for ending the company’s investments in Israeli banks that are deeply implicated in the oppression of Palestinians, ahead of the corporation’s 2020 shareholders’ meeting last month.

The Stop AXA Assistance to Israeli Apartheid Coalition wants a full end to the company’s complicity in Israel’s human rights violations, which conflicts with violate the company’s own “responsible investment” policies.

AXA has made significant changes in its investment in companies that are deeply implicated in Israeli aparheid. Over the last eighteen months, AXA has reduced its ownership in Equitable Holdings, the company directly invested in Elbit Systems, from 64% to only 9%. Yet, AXA has increased its direct investments in three Israeli banks: Mizrahi Tefahot Bank, Bank Leumi and Israel Discount Bank. All three banks are on the UN database of companies involved in business with Israel’s illegal settlement enterprise.

As a result, the Stop AXA Assistance to Israeli Apartheid Coalition increased its actions in the run up to AXA’s shareholders’ meeting to ensure that divesting from Israeli apartheid was on the agenda.

Calls for AXA to divest were also present in protests against Israel’s plans to formally annex large swathes of the occupied Palestinian territory.

In Madrid, Brussels and Antwerp on June 18th, human rights campaigners protested outside of AXA HQ calling for divestment from the three Israeli banks and fully divesting from Equitable Holdings. On the 26th, activists in Berlin held a protest against AXA, as did activists in Paris a few days later.

During the day of the AXA shareholders’ meeting, the Coalition took over the official hashtag #AXAG2020.

Thomas Buberl, AXA’s CEO claims that his company is “acting for human progress by protecting what matters." Considering AXA’s complicity in Israeli apartheid against Palestinians, do Palestinian rights matter to AXA?

AXA has taken important steps to address climate change. In 2015, the AXA group was the first to commit to divesting from fossil fuels, presenting in 2020 a new climate strategy. While these are positive steps, they show a hypocritical understanding of climate justice, given AXA’s ongoing complicity in grave violations of Palestinian human rights. As Abeer Butmeh, coordinator of the Palestinian Environmental NGOs Network, said:

“For Palestinians, climate change is not just a natural phenomenon, but a political one. Israel's regime of occupation and apartheid, which denies us the right to manage our land and resources, exacerbates the climate crisis Palestinians face, making us more vulnerable to climate-related events.”

By investing in complicit Israeli banks that contribute to building and financing illegal Israeli settlements, AXA is implicated in war crimes against the Indigenous Palestinians.

AXA has also invested in research to fight the COVID-19 pandemic, but this research does not mitigate nor excuse the damage from AXA’s investments in Israel’s serious violations of human rights. During this challenging time, access to healthcare should be granted for all, without any restriction, yet Israel continues its brutal repression of Palestinians and theft of their land despite the pandemic.

It is precisely Israel’s #CoronaRacism and apartheid policies that make Palestinians even more vulnerable to COVID-19. Not only is AXA contributing to privatizing health care, it is endangering Palestinian lives. By investing in Israeli apartheid and occupation AXA is hindering Palestinians’ access to healthcare.

Though AXA is a signatory of the UN Global Compact, it directly violates its principles by showing utter disregard for human rights. AXA’s shareholders’ report, in fact, doesn’t mention human rights once.

Protests and public pressure campaigns that expose AXA’s business involvement in Israel’s serious human rights violations in the occupied Palestinian territory will escalate until AXA completely divests from the complicit Israeli banks and ends its investment in Equitable Holdings.

We ask all those interested, including conscientious individuals, trade unions, community spaces and businesses who have their insurance with AXA and care about human rights to contact us at: [email protected]. 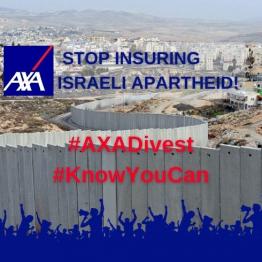