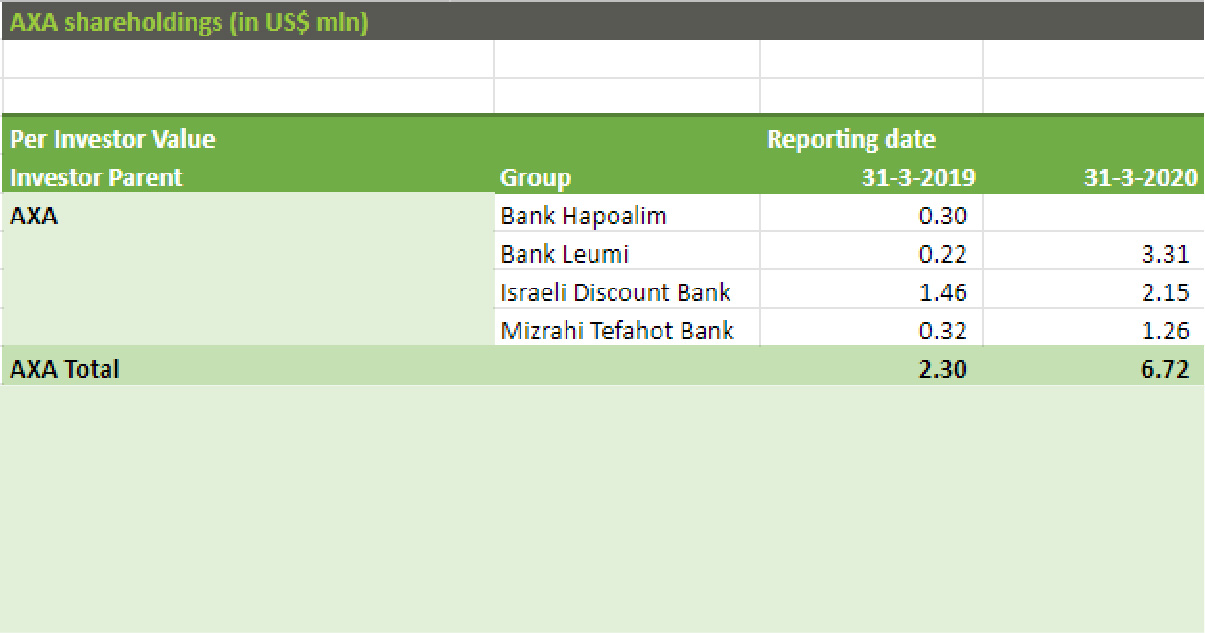 In May 2020, the Coalition Stop AXA Assistance to Israeli Apartheid contracted Profundo to investigate the financial links between both AXA and Equitable Holdings (formerly AXA Equitable Holdings) and five Israeli banks -- Bank Hapoalim, Bank Leumi, First International Bank of Israel, Israel Discount Bank, and Mizrahi Tefahot Bank -- as well as Israel’s biggest military company, Elbit Systems, all of which are deeply complicit in Israeli apartheid. While Profundo provided the requested data, the Coalition is responsible for the interpretation of the data and the conclusions in this update.

This latest update reveals that, even though AXA divested from Elbit Systems December 2018 and has now divested from Bank Hapoalim, the company’s investments in the remaining three complicit Israeli banks have almost tripled. According to a SumOfUs report from July 2019, AXA’s investments in Bank Hapoalim, Bank Leumi, Israel Discount Bank, and Mizrahi Tefahot Bank at that point were $2.3 million. Now, they are almost $7 million. All these Israeli banks are listed in the UN database of companies that are complicit in Israel’s illegal settlements in the Occupied Palestinian Territory.

To sum up, AXA’s direct investment in three complicit Israeli banks has almost tripled, despite its divestment from Bank Hapoalim. In addition, AXA still maintains a 9.03% stake in Equitable Holdings, which has dramatically increased its own investments in these Israeli banks and in Elbit Systems.

AXA tries to complicate things, but it is still very simple: AXA keeps profiting from investing in Israeli apartheid and must be pressured to end this complicity.