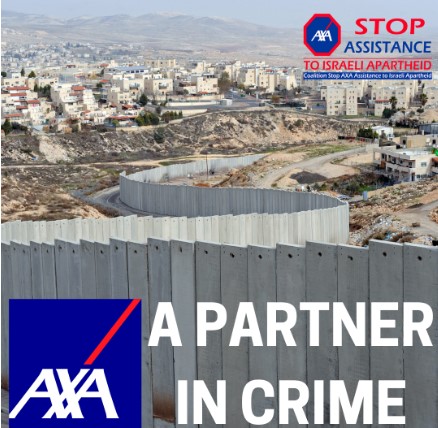 AXA continues to finance and profit from Israel’s colonial settlements and apartheid.

On 5 December 2022, the coalition Don’t Buy Into Occupation (DBIO) launched its updated report. Based on research by Profundo, the report exposes that in the period of January 2019 - August 2022, 725 European financial institutions, among them the French insurance company AXA, subsidized apartheid Israel’s colonial settlements with US$115.5 billion in shares and bonds, and US$171.4 billion in loans and underwritings.

With regard to AXA, the new DBIO report shows that the French insurer even increased its involvement in the illegal settlements. Whereas by May 2021,  AXA had held shares worth US$ 6M in two Israeli banks, main financiers of settler-colonialism (Bank Leumi and Israel Discount Bank), it was invested with US$ 15.6M in four such Israeli banks by August 2022: Bank Hapoalim (US$ 6.53), Leumi Bank (US$ 5.63M), Israel Discount Bank (US$ 3.08M) and Mizrahi Tefahot Bank (US$ 600K).

Moreover, whereas in the previous DBIO report, AXA ranked 30th among the top 100 European investors in apartheid Israel’s settlement enterprise, it ranks 24th in the current DBIO report with a total investment of US$ 957M in additional companies directly involved in the colonial enterprise, among them Caterpillar, Volvo Group, IBM, Siemens, Puma, Airbnb and Alstom.

AXA and human rights due diligence

The UN Guiding Principles on Business and Human Rights clarify that “all business enterprises have an independent responsibility to respect human rights, and that in order to do so they are required to exercise human rights due diligence to identify, prevent, mitigate and account for how they address impacts on human rights”.

AXA claims to respect human rights, and to have “established safeguards to identify and prevent serious violations of human rights and environmental abuses” in line with its duty of due diligence and vigilance under international standards and French law. Specifically in the field of investment, AXA commits to “seeking to prevent or mitigate adverse Human Rights impacts that arise from its investment activities”.
AXA also claims  that it will “achieve carbon neutrality in its insurance and investment portfolios by 2050 on a 1.5°C trajectory”.

Based on the above, AXA implements since 2020 a Responsible Investment (RI) policy, which provides, among others, guidelines and business restrictions for certain sectors, activities and products that “could be inconsistent with AXA’s corporate responsibility goals of protecting people over the long term and may be detrimental to AXA’s brand and reputation.” AXA’s RI policy, however, fails to explicitly identify areas of armed conflict, war crimes and serious human rights abuses, such as Israel’s illegal settlements and apartheid in the occupied Palestinian territory, as contexts where investment restrictions and exclusions apply.

Absent relevant guidelines, unrestricted investment continues in companies directly involved in business with Israel’s illegal settlement enterprise, including those named in UN Human Rights Council’s database or the updated DBIO report, although for the sectors it has identified as sensitive or subject to exclusions, AXA maintains “sector-level blacklists” of companies in which investment is restricted or absolutely prohibited.

Palestinian civil society has long called on AXA to implement a coherent responsible investment policy and end its complicity in apartheid Israel’s violations of Palestinian human rights as well as in climate destruction. By financing Israeli banks that are the backbone of Israel’s illegal settlements enterprise, AXA is responsible - and possible legally liable - for aiding/abetting or profiting from war crimes and the crime against humanity of apartheid.

We won’t stop the call for #AXADivest and #BoycottAXA until AXA ends its support for Israel’s violations of the human rights of the Indigenous Palestinian people, once and for all.