AXA is closely watched for its complicity in Israel’s apartheid 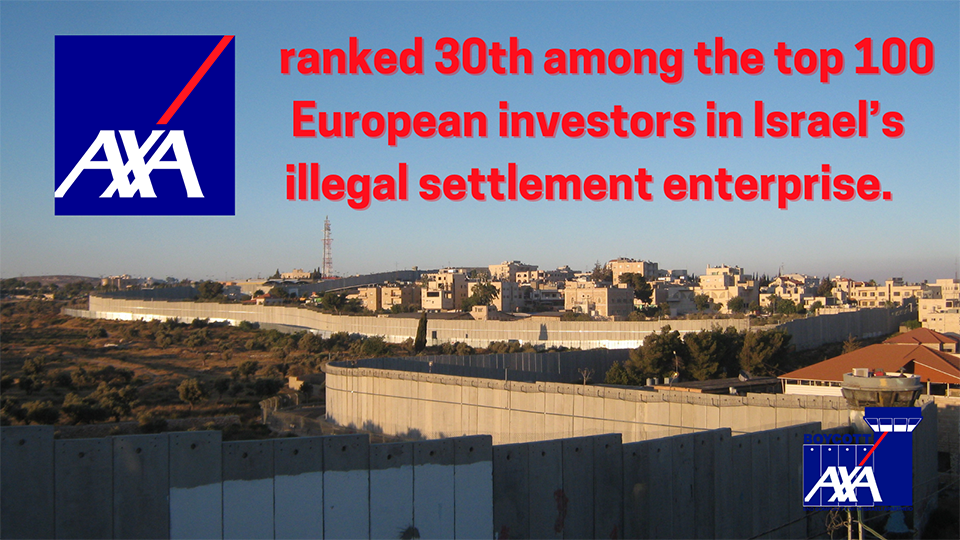 On 29 September 2021, the coalition « Don’t buy into occupation » (DBIO) published a report, which, based on research by Profundo. exposes the role of European financial institutions as financiers  of 50 business enterprises involved in Israel’s illegal settlement enterprise,

From this report, we learn that as of May 2021, the French multinational insurance giant AXA ranked 30th among the top 100 European investors in businesses that facilitate Israel’s illegal settlements – including many that are listed in the UN database of February 2020.

Whereas in March 2021 AXA was invested with US5.95 million in four Israeli banks (Bank Hapoalim, Bank Leumi, Israel Discount Bank, Mizrahi Tefahot Bank), the DBIO report shows that by May 2021, AXA had divested from two of them (Bank Hapoalim, Mizrahi Tefahot). The report also confirms that AXA has not reinvested in Israel’s military manufacturer Elbit since it sold its shares in December 2018.

Moreover, a review of Equitable Holdings’ (EQH) shareholders showed that by the end of June 2021, AXA held only 0.07% of EQH shares, down from 9.93% in March. This means that AXA can no longer influence or control EHQ’s investment decisions, having sold almost all of its shares in a process that had EQH leave the AXA group and drop the AXA acronym from its name.

The report also shows that by May 2021, AXA was also invested in additional companies involved in Israel’s illegal settlements, among them General Mills, Manitou, CETCO Mineral Technology Group, RE/MAX Holdings, Solvay and Terex. Some of these are already named in the UN database, while all meet the UN’s criteria for inclusion in future updates of the database. With a total investment of US$ 845 million, DBIO ranks AXA 30th among the top 100 European investors in Israel’s illegal settlement enterprise.

On the eve of AXA’s annual general meeting on April 29th 2021, UN Special Rapporteur on human rights in the OPT Michael Lynk called on the French insurance giant to fully divest from Israeli banks, explaining that “Given the gross human rights violations associated with the Israeli settlements, it is impossible for businesses to be economically engaged with the Israeli settlements and still respect their obligations under international human rights and humanitarian law.”

The coalition “Stop AXA Assistance to Israeli Apartheid” urges AXA to follow the example of KLP, Norway’s largest pension provider, which divested - with reference to the UN database - from 16 companies complicit in Israel’s illegal settlement enterprise.

Join the coalition and boycott AXA until it divests from Israeli apartheid!