“The university is proud of all its students and thanks those who did reserve service,” writes Tel Aviv University dean Yoav Ariel in a 13 August email. “I wish us all a swift return to our blessed routine.” 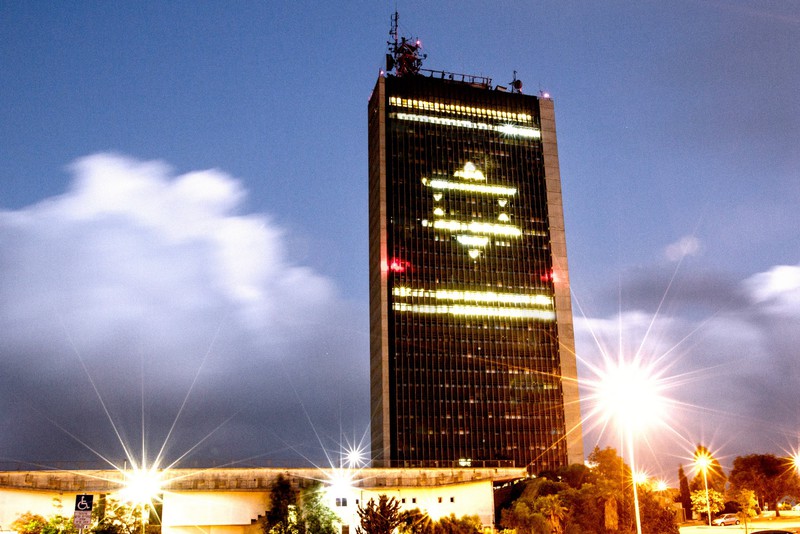 A photo from the University of Haifa’s Facebook page shows the Eshkol Tower which was lit up as the Israeli flag, administrators said, to “express solidarity with Israeli soldiers.”

“The university is proud of all its students and thanks those who did reserve service,” writes Tel Aviv University dean Yoav Ariel in a 13 August email. “I wish us all a swift return to our blessed routine.”

Ariel’s email lays out some of the benefits Tel Aviv University is providing to students who took part in Israel’s military assault on Gaza, including a chance to retake tests.

The university had already announced last month that it would be providing one year of tuition stipends to soldiers.

Israel’s attack, which has killed at least 1,975 Palestinians including at least 459 children and caused unprecedented destruction in Gaza, was dubbed “Operation Protective Edge” in English, and in Hebrew, “Tzuk Eitan” – which translates as “Mighty Cliff.”

For Palestinians in Gaza, especially children and university students, there will be no quick return to routine – blessed or otherwise – as the educational infrastructure has suffered devastation. University facilities have been bombed and dozens of schools run by UNRWA, the UN agency for Palestine refugees, still house 218,000 peopledisplaced by the Israeli assault just two weeks before the start of the school year.

At least 373,000 Palestinian children in Gaza “require direct and specialized psychosocial support,” the UN states. “Children are showing symptoms of increasing distress, including bed wetting, clinging to parents and nightmares. It is likely that every child in the Gaza Strip is affected by the crisis and will require some level of psychosocial support.”

Almost every Israeli university is bolstering its complicity in this horror by rewarding students who took part in the attack on Gaza, including those who might have participated in war crimes.

These benefits are not only practical; they also serve to glorify and elevate those who took part in the massacre, further cementing the cherished role of the military in Israeli society, especially among its youth.

The Hebrew University sent out a letter declaring “The university is joining the war effort to support its warrior students, in order to minimize the financial burden” on those who were called up to join the attack on Gaza.

The university calls on “friends and alumni” to donate to a special scholarship fund and links to a donation page that allows gifts to be earmarked for the “Protective Edge” fund.

Other benefits the Hebrew University is providing its “warrior students” include discounts and sales for reservists, extra tutoring before tests, rebates on test preparation courses, free extensions of gym memberships, special access to the library when it is closed to other students and a 50 percent discount on monthly public transit passes through the end of August.

University of Haifa lights up

On 11 August, Rector David Faraji wrote to soldiers informing them that the “University of Haifa blesses your return and expresses great appreciation for your activity and contribution within the framework of your service in Operation Protective Edge.”

The letter provides “details of the adjustments and benefits that have been decided upon, jointly with the student union.”

The university made a public display of its pride and complicity. “To express solidarity with Israeli soldiers and residents of the south and center currently under rocket attack, the University of Haifa’s thirty-story Eshkol Tower has become an Israeli flag,” itannounced on its website.

“The tower, at the top of Mount Carmel, can be seen throughout the area and in settlements in the north for miles around,” it adds. The university, moreover, “sends its deepest condolences to the families of the soldiers and civilians killed in recent days, and wishes a speedy recovery to the injured.”

It does not mention a single word about the large-scale destruction and killing in Gaza.

Haifa’s alumni association also sent out a fundraising appeal to raise money for soldiers who took part in the attack on Gaza, featuring a photo of human resources studies student Kobi Rabinowitch in uniform and carrying a gun.

The page links to this video, posted on the university’s official YouTube channel, boasting that the university “was also conscripted” in the war effort. The video reveals that 150 students and staff took part in the war. Shedding any pretense of independence, the video urges potential donors: “Help us strengthen the State of Israel.”

Rabinowitch also talks about his role as both student and soldier.

Ben-Gurion University of the Negev

“The Ben-Gurion University of the Negev admires you, who served in reserve duty within Operation Protective Edge, and thanks you for your contribution to the security of the state,” an 11 August administrator’s letter to soldiers says.

“We are aware of the difficult time that you have been through, and of the fact that you must reorganize yourselves before returning to academic activity,” the letter adds, advising students who took part in the attack on Gaza that they have the right to access “general and academic benefits that the administration of the university has decided on, in collaboration with the deans of the faculties and the student union.”

The soldiers are told that staff members have been appointed to help them access the benefits and they are urged to “contact the reserve military office, which is located at the entrance to the student housing. The dean of students and the student union are at your service at any time.”

The Ben-Gurion University student union issued a similar message: “We are proud of you and support you upon your stepping forward for reserve service and your contribution to the security of the state, with dedication and self-sacrifice.”

The student union assures soldiers engaged in the destruction of Gaza that it is defending their interests: “We wish to set your minds at rest and stress that now, in days of hostilities, you must focus on your blessed actions – while we handle the academic leave.”

The Interdisciplinary Center Herzliya (IDC Herzliya), a prestigious private university, already made part of its contribution by setting up a social media “war room” to sell the Gaza massacre on Facebook.

It is also offering soldiers a package of benefits including a chance to retake tests, extensions of deadlines for papers, a twenty-strong volunteer team providing military service support and the appointment of a special “reserve duty coordinator” in each of the schools on campus.

“The specific benefits vary from university to university,” says Israel expert Dena Shunra who provided research and translations for this post, “but all have financial significance for the universities, which are shouldering part of the cost of Operation Protective Edge, and are thereby complicit in any damage done in the course of it.”

This support comes on top of decades of well-documented complicity by Israeli universities including military research and a direct role in the expropriation of Palestinian land.

The further evidence of direct support by Israel’s universities – declaratory and financial – for the oppression of Palestinians and the destruction of Gaza will no doubt bolster calls for the boycott of Israeli academic institutions.