Email the President of the UN General Assembly and UN Secretary-General now and demand #UNInvestigateApartheid! 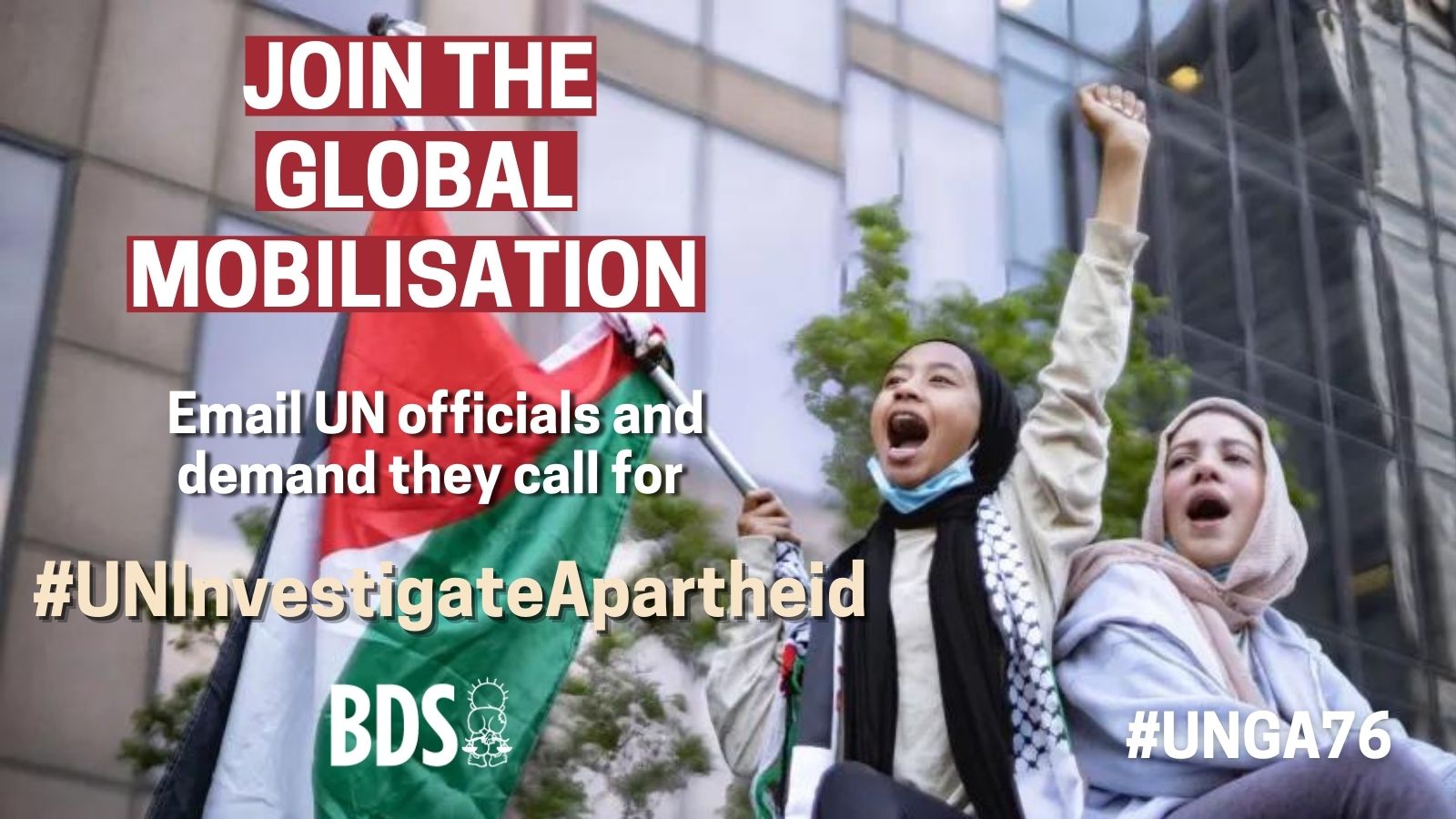 The 76th session of the United Nations General Assembly will begin on September 14th, and representatives of governments from around the world will gather at the UN headquarters in New York for #UNGA76.

Decades of resistance on the ground and international solidarity, coupled with measures taken by the United Nations helped confine apartheid in South Africa to the dustbin of history. For its part, the UN established a special UN Committee and Center to help eradicate apartheid. It also imposed a military embargo and called on all states to end military, economic, cultural and diplomatic relations with apartheid South Africa.

It’s beyond time for the UN to do the same with apartheid Israel.

Take action now by demanding that the UN General Assembly calls for #UNInvestigateApartheid!

President @abdulla_shahid & UN Gen Sec @antonioguterres: I am calling on #UNGA76 to demand the #UNInvestigateApartheid & impose a #MilitaryEmbargo!

It's time for the UN to investigate Israeli apartheid

State representatives will convene for the coming months during the United Nations General Assembly’s 76th session, starting 14 September, to deliberate on the most important questions of international law, human rights and world peace.

In the past, this very forum has taken concrete and decisive steps in defence of justice and equality. In 1962, the General Assembly adopted a resolution condemning apartheid policies in South Africa, with a Special Committee against Apartheid constituted the following year. The same year, the General Assembly called for an arms embargo on South Africa, made mandatory in 1977 by the Security Council. These steps contributed to the struggle against apartheid on the ground, including a global boycott campaign. And together these efforts led to the end of the apartheid regime.

Today, we demand that the United Nations take an equally unequivocal stance against Israel’s apartheid. Joining the Palestinian civil society and solidarity groups, which have for decades recognized Israel as imposing a single system of apartheid against all Palestinian people, today Human Rights Watch and the largest Israeli human rights NGO, B’Tselem, are calling for a UN investigation and targted sanctions.

State representatives from South Africa and Namibia- formerly under apartheid, as well as most recently former UN Secretary General Ban Ki-moon condemned Israel as an apartheid state. UN rapporteurs as well as the UN Economic and Social Commission for Western Asia (ESCWA) in a 2017 report (later rescinded under political pressure) confirmed Israel’s apartheid.

It is past time for the UN to take concrete measures to investigate, condemn and dismantle Israel’s apartheid, beginning with a military embargo. We urge you, as office bearers of this institution, to convey our message and support the struggle for justice, freedom and equality, and to end this 21st century apartheid.

Thank you for contacting the UN General Assembly