A Wider Bridge: the “gay rights” group funded by homophobes

A Wider Bridge has cosponsored multiple pinkwashing efforts intended to use LGBTQ messaging to paper over Israeli rights violations. 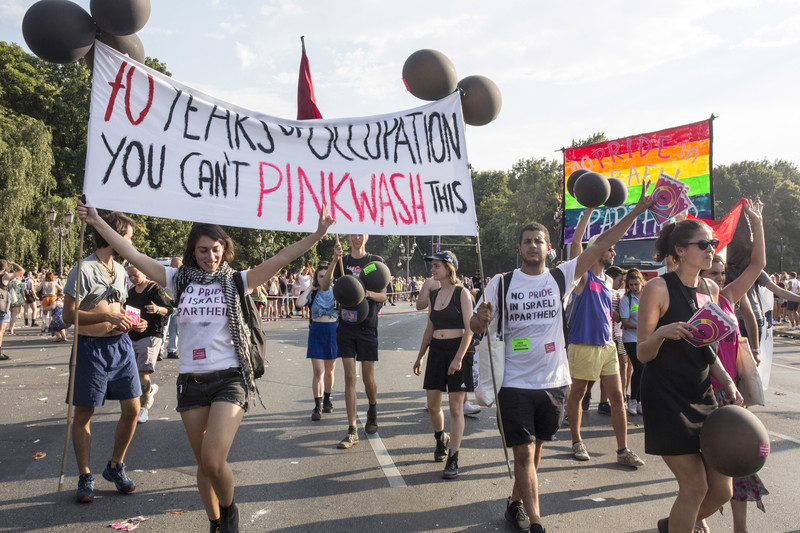 The organization has repeatedly drawn accusations of pinkwashing – the attempt to use the supposedly positive record of the Israeli state on LGBTQ rights to cover up the state’s brutal oppression and ethnic cleansing of Palestinians – to which it responds by declaring that pinkwashing is a myth.

A Wider Bridge insists that accusations of pinkwashing are nothing more than an attempt to silence progressive, LGBTQ Jews and other Zionists who support the Israeli state, and it often leans hard on its carefully cultivated progressive image to give its pushback credibility. A closer look at the organization’s internal politics and institutional funding sources, however, paints a much different picture.

A Wider Bridge receives funding directly from organizations with a long and troubling pattern of giving to groups that could be classified as right-wing, anti-gay, anti-Muslim, pro-settlement; campus-specific organizations dedicated to those causes; or agents and politicians in the Republican Party. All eight of their publicly available institutional funders have repeatedly given to organizations that fit these categories.

Of particular note among that group are the Paul E. Singer Foundation; the Jewish Community Federation and Endowment Fund of San Francisco, The Peninsula, Marin and Sonoma Counties (otherwise known as the JCF); and the Charles and Lynn Schusterman Family Foundation.

The Singer Foundation is the personal giving vehicle of Republican mega-donor, billionaire and vulture capitalist Paul Singer. Singer, who made a large portion of his money buying distressed debt from developing nations such as Peru, Argentina and Congo, donates extensively to Republican interests, and an examination of his individual political giving and tax Form 990s from his foundation revealed donations to the anti-gay Heritage Foundation, the Canary Mission-linked Central Fund of Israel, and a $1 million donation to the Inaugural Committee for Donald Trump.

Likewise, an examination of the Schustermans’ taxes shows similar donations to the Central Fund of Israel, extensive support for right-wing, pro-Israel campus organizations, many of which were featured in the censored Al Jazeera documentary The Lobby – USA.

This author has already published a report on the JCF’s giving to right-wing groups.

A Wider Bridge’s extensive history of right-wing political actions fits more clearly into its organizational story in light of its institutional funding. The organization frequently creates backlash and smear campaigns that are similar to other right-wing groups funded by their common institutional donors.

It notably cosponsored multiple pinkwashing events with the pro-Israel and anti-gay organization StandWithUs, a series of which became the subject of a 2015 documentary by scholar and activist Dean Spade, called Pinkwashing Exposed: Seattle Fights Back.

It was behind the largely fabricated backlash in the wake of the 2016 Creating Change conference in Chicago.

And just weeks ago, A Wider Bridge attempted to smear a group of queer, trans, Muslim and Jewish activists (including myself), as anti-Semitic, homophobic and transphobic after we disrupted the opening plenary of the 2019 Creating Change conference in Detroit to call attention to the censorship of programming related to Palestine.

This is the true essence of pinkwashing: using an LGBTQ-friendly or intra-community LGBTQ image to paper over right-wing politics and create a progressive image. To those who have been paying attention to A Wider Bridge’s actions since their founding in 2012, the news of their right-wing political leanings will come as little surprise. However, for those to whom this is news, I’ve written an educational resource about A Wider Bridge’s funding sources and an analysis of the political priorities of their institutional funders.

“Pride With Prejudice: Exposing A Wider Bridge’s Right-Wing Funding” is a 36-page report that goes into detail on the nonprofit’s institutional funders; each of their respective histories of right-wing giving; provides an expanded definition of pinkwashing; and a method of analysis for a nonprofit’s political leanings. The report is intended as an exposé and a call to action; an organization with links to anti-gay, anti-Muslim and Republican groups has no place representing LGBTQ Jewry, and no place calling itself “progressive.”

Anti-pinkwashing organizers, or simply those who feel duped by A Wider Bridge’s marketing, now have the tools to fight back.

Stephanie Skora is an organizer, writer, Ashkenazi Jewish trans woman and dyke who organizes for Palestinian, Jewish, queer and trans justice and liberation. 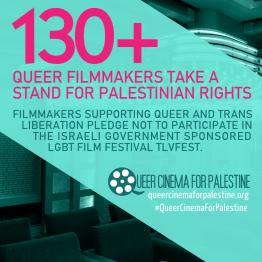 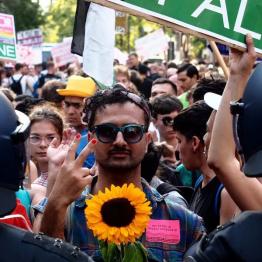 You can’t pink wash this 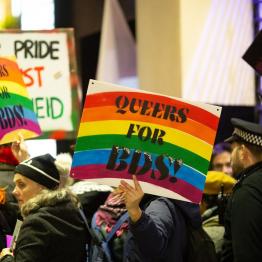