May 30, 2017
/ By
Palestinian Campaign for the Academic and Cultural Boycott of Israel (PACBI)
/ 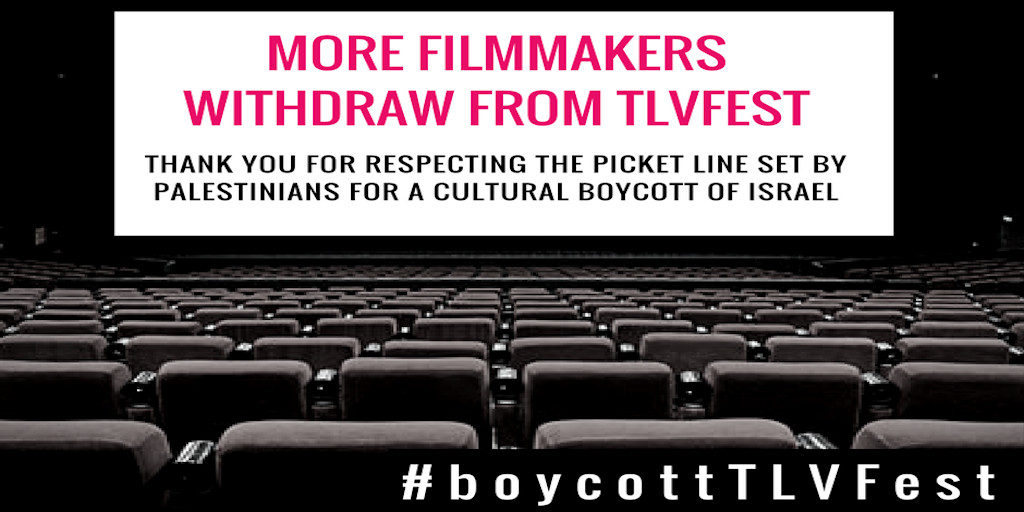 May 29, 2017  –  At least five of the twelve international speakers scheduled to participate in the Tel Aviv International LGBT Film Festival this June 1-10 have reportedly pulled out after queer Palestinian activists and their allies in the BDS movement called for boycotting the “pinkwashing” propaganda event that gives progressive cover for Israel’s ongoing and grave violations of Palestinian human rights.

Out of respect for the Palestinian call for a cultural boycott, the award-winning South African director John Trengove withdrew from the TLVFest’s opening event. In a letter to the organizers, Trengove wrote:

With the pain of the Apartheid struggle still fresh in our collective consciousness, the issue is … a very sensitive one for many South Africans. ...knowing what I know now, I feel it is imperative that I withdraw myself from attending. … [I]t is impossible to look past the fact that the festival (and my participation in it) could serve as a diversion from the human rights violations being committed by the state of Israel.

A rigorous boycott against ALL [Israeli] government funded initiatives is necessary. ... As a South African, I have first-hand experience of how boycotts helped bring about democratic transformation and therefore have decided to add my name and voice to the boycott Israel initiative.

Trengove was followed by U.S. Emmy Award-nominated producer, director, writer and organizer Catherine Gund, her co-director Daresha Kyi and the entire team at Aubin Pictures who produced the documentary Chavela on famed Mexican singer Chavela Vargas. They all endorsed the call to boycott. Canadian actress and comedian Fawzia Mirza also canceled her participation out of respect for the call.

Media reports say that German filmmaker Helene Hegemann, Swiss actress Jasna Fritzi Bauer, and Nadia Abraham, a Palestinian living in Denmark who was slated to participate in the festival jury and on a panel, have also canceled. As a result, the entire line-up for a Women in Cinema panel has been removed from the festival website.

In a letter to festival organizers, Catherine Gund and Daresha Kyi wrote:

TLVfest is being supported by government entities in Israel that are deeply complicit in violations of international law which include ongoing wars, repression of Palestinians, and occupation of Palestinian lands. … [C]ultural events, such as this festival, aim to cover up these violations. … On a personal and political level, we cannot support this. Our film, which sets forth a vision of peace and freedom, should not be at an Israeli-government funded cultural event. We stand in solidarity with the boycott.

[W]e at Aubin Pictures, Inc., producers of Chavela, will take whatever steps we can towards supporting the boycott. Neither of the directors nor any other representative of the film will be present at this festival. We will not do any press that highlights this festival. And we are committed to working with Palestinian queers and their allies in the BDS movement as we continue the journey of bringing Chavela out into the world in a safe, respectful manner that supports the Palestinian cultural boycott in efforts to uphold the human rights of Palestinians everywhere.

As Palestinian queer activists, we warmly welcome the support of principled artists like John Trengove, Catherine Gund and Daresha Kyi, who refuse to let their art cover up and “pinkwash” grave Israeli violations of Palestinian human rights. They’ve rejected the Israeli government’s cynical use of LGBTQI culture and events to feign a bankrupt unity at the expense of others, and instead  affirmed their commitment to a more free and more just world for all.

A spokesperson for the Palestinian Campaign for the Academic and Cultural Boycott of Israel (PACBI) said:

We applaud these filmmakers for heeding our call not to cross the picket line and supporting our nonviolent struggle for freedom, justice and equality. Their statements demonstrate a nuanced approach with great regard for the calls of the oppressed.

Their ethical support for the nonviolent cultural boycott of Israel to achieve Palestinian human rights exposes the Orwellian characterization by the festival director Yair Hochner of the BDS boycott efforts as ‘violence’  while his festival tries to pinkwash decades of Israeli violence, ethnic cleansing and military occupation.

The BDS movement strongly believes that art has the power to effect change, and that artists have the moral responsibility to refrain from allowing their art to perpetuate or cover up oppression.

Art sponsored by government institutions that are complicit in crimes against the oppressed loses that power and becomes nothing more than a tool to whitewash, or pinkwash, violations of human rights. Just as artists refused to perform in Sun City during South Africa’s apartheid era, more and more artists are denying Israel the opportunity to use their art to conceal its decades-long regime of occupation, settler-colonialism and apartheid against the Palestinian people.