US labor board affirms union’s right to boycott Israel

In August 2015, the 30,000-strong United Electrical, Radio and Machine Workers of America (UE) became the second national trade union in the US to endorse BDS. The US government agency that enforces trade union legislation has dismissed attempts by a pro-Israel lobby organisation to legally challenge the union's decision. 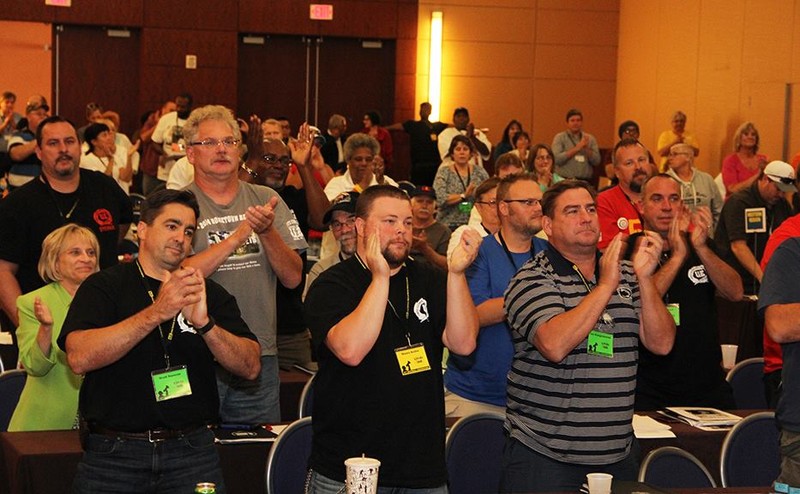 The United Electrical Workers backed BDS in a vote of delegates at the union’s August 2015 national convention in Baltimore. (via Facebook)

The National Labor Relations Board has reaffirmed its dismissal of charges against the United Electricalworkers union because of its support for the Palestinian-led boycott, divestment and sanctions movement.

The NLRB is the US federal agency that enforces the country’s trade union legislation.

In August 2015, the 30,000-strong United Electrical, Radio and Machine Workers of America, known as UE, became only the second national trade union in the US to back BDS by a vote of delegates at its annual convention in Baltimore.

In October, Shurat HaDin, a lawfare group with ties to Israel’s Mossad spying and assasination agency, filed acomplaint against the union, claiming that its support for BDS amounted to a violation of the law against secondary boycotts.

In January, the labor board dismissed the complaint, stating it had investigated and found “there is insufficient evidence to establish a violation” of the law.

Shurat HaDin appealed the dismissal, but on 26 May the labor board’s general counsel issued a letter that the union says reaffirms the earlier decision to throw the case out.

Knowlton said that UE had in the past “withstood attempts by the US government to silence us during the McCarthy era in the 1950s,” and was “unbowed by the latest attempt of a surrogate of the Israeli government to stifle our call for justice for Palestinian and Israeli workers.”

“The NLRB’s decision is a victory for the growing BDS movement across the US, which faces increasing political attempts to silence and intimidate critics of the Israeli government,” he added.

The NLRB decision will encourage rank and file members in other unions who are battling bosses for the right to express and organize support for Palestinian rights.

The UE resolution that Shurat HaDin tried and failed to overturn calls on the US to end all military aid to Israel and for pressure on Israel “to end the occupation of the West Bank and East Jerusalem and the siege of Gaza and negotiate a peace agreement on the basis of equality, democracy and human rights for the Palestinian and Israeli people, including Palestinian self-determination and the right of return for refugees.”

Unable to stem the growing grassroots support for Palestinian rights, and particularly the BDS movement, Israel and its surrogates have increasingly turned to repressive legislation and litigation.

Last month, Brooke Goldstein explained that the purpose of such lawsuits was to “make the enemy pay” – that “enemy” being comprised of practically anyone who organizes for Palestinian rights.

Goldstein, director of the Lawfare Project, a pro-Israel group founded with the support of the Conference of Presidents of Major American Jewish Organizations, has also asserted that “there’s no such thing as a Palestinian person.”

In April, several plaintiffs filed a lawsuit against the American Studies Association, aimed at forcing it to undo its 2013 vote to boycott Israeli institutions.

John K. Wilson, an editor of Academe Blog, a publication of the American Association of University Professors,described the lawsuit as “frivolous litigation designed for the sole purpose of getting the government to suppress the freedom of speech of a private organization.”

But just this month, a one-person outfit called the Zionist Advocacy Center filed yet another frivolous lawsuit on behalf of plaintiffs who are not even members of the American Studies Association.

Radhika Sainath, an attorney for the legal advocacy group Palestine Legal, told Inside Higher Ed that the complaint is “a meritless lawsuit based on a hypothetical injury that will be thrown out of court in a heartbeat.”