Skip to main content
In the News
This article is reposted from
BDS Italia
, click here to read the original article.

Through its patronage for Watec, the Commission is also “giving credibility to the myth of the Israeli water miracle, which was built on the appropriation of Palestinian water resources and the denial of a fundamental right,misleading participating European companies and public opinion.” 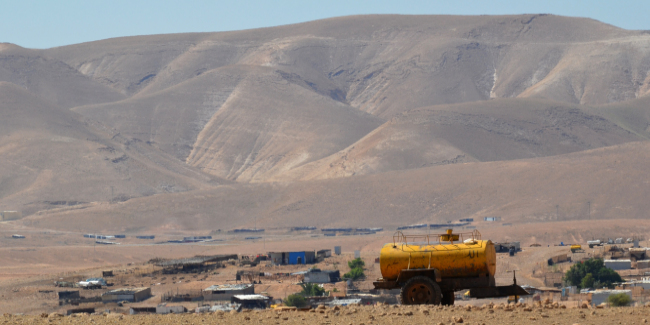 Nearly 40 European trade unions, water and human rights networks and environmental groups from a dozen countries have written a letter to the European Commission urging withdrawal of patronage from Watec, the Israeli water conference and exhibition to be held for the first time in Europe, September 21-23 in Venice, Italy. (See letter and signatories)

Endorsers of the letter note the European Commission patronage comes “at a time when Israel is cutting off water to Palestinian communities, leaving tens of thousands without access to water during the hottest time of the year.” In addition, WATEC includes “companies involved in and facilitating violations of international law.”

Among the signatories of the letter are the Italian Forum of Water Movements, Right2Water Ireland, Eau Secours and the Association des Consommateurs d’Eau de la ville de Sète in France, and the Association for International Water Studies in Norway; the Italian trade unions FIOM-Cgil and USB, representing 360,000 and 250,000 workers respectively, as well as the Teachers’ Union of Greater Lisbon; Italy’s one million member strong Associazione ARCI, the Belgian NGO coalition CNCD 11.11.11, Italian NGOs Cospe and Un ponte per…, and Umanotera, The Slovenian Foundation for Sustainable Development.

The European Commission also granted patronage to the 2013 and 2015 editions of Watec in Tel Aviv, where the main sponsor was Mekorot, Israel’s national water company documented by organizations such as Amnesty International as appropriating Palestinian water resources and supplying water to Israeli settlements. Additional sponsors and participants include settlement based Ariel University, companies providing services to settlements such as Netafim, Tahal Group International, Hagihon, KKL/JNF as well as Elbit Systems, one of Israel’s leading producers of weapons and surveillance systems used against the Palestinian population and along Israel’s Wall.

The signatories argue that by granting patronage to events sponsored by and involving companies and institutions operating in Israeli settlements, the European Commission “is at odds with the European Union's own official position on settlements. Even worse, it legitimates and encourages illegal activities that trample fundamental rights such as access to water, thereby reinforcing Israel’s impunity.”

Through its patronage for Watec, the Commission is also “giving credibility to the myth of the Israeli water miracle, which was built on the appropriation of Palestinian water resources and the denial of a fundamental right,misleading participating European companies and public opinion.”

The endorsing groups call on the European Commission to follow the lead of the growing list of “European companies that have ended ties with Israeli companies and projects violating international law, including the Dutch companies Vitens and Royal HaskoningDHV, French companies Veolia, Safege and Poma, Ireland’s CRH and Germany’s Deutsche Bahn.” They also urge “all European institutions to fulfill their legal obligation to put an end to all forms of support and assistance for Israeli violations of international law and Palestinian rights.”

The letter comes after fourteen prominent Palestinian agricultural and environmental organizations wrote to the Italian agricultural network Coldiretti urging their Italian counterparts to withdraw sponsorship and participation from Watec, noting that “it is through the control of water resources that one of the most blatant violations of international law related to the illegal occupation of our territory manifests itself.”