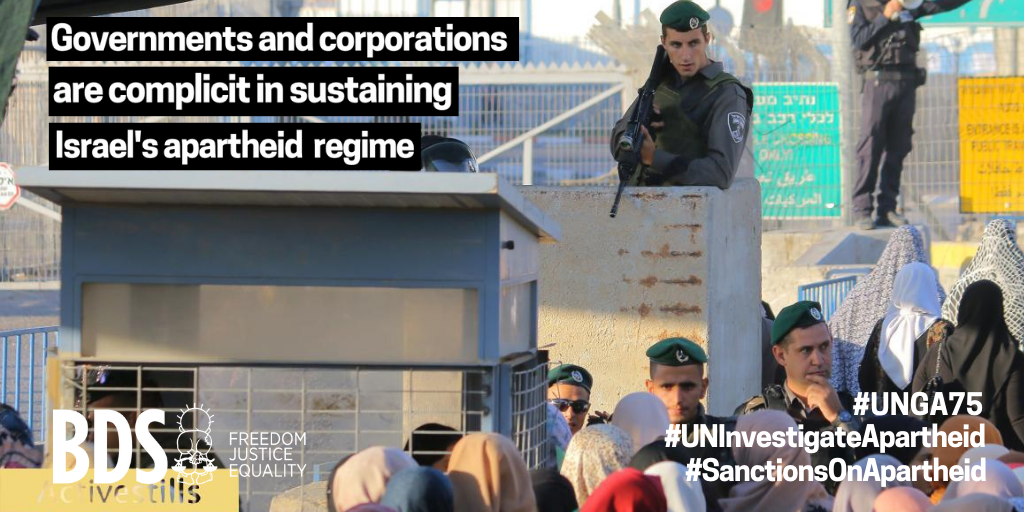 The UN played an important role in bringing apartheid in Southern Africa to an end – investigating South Africa’s apartheid regime and imposing sanctions on it, but the UN has not yet assumed its responsibility for acting to eradicate Israeli apartheid.

This week, Palestinian civil society, with support from hundreds of organizations worldwide, issued a call for the UNGA and its Member States to investigate Israel’s apartheid regime, and to impose targeted sanctions by all States to stop Israeli apartheid and illegal annexation of Palestinian land.

Governments help to sustain Israeli apartheid through complicit relations, particularly arms trade and military-security cooperation with it. They have a legal responsibility to end complicity and dismantle apartheid.

Corporations are also essential to sustaining Israel’s violations of Palestinian rights. They not only provide the tools to maintain Israel’s system of oppression, but also profit from it.

This year, the UN finally took a first step towards corporate accountability, publishing a database of 112 companies involved in Israel’s illegal settlement enterprise.

While a step in the right direction, the UN’s settlement database is incomplete. Companies like Hewlett Packard Enterprises (HPE), which maintains servers for Israel’s segregationist population registry, including the database of illegal settlers, are not in the database.

Urge the UN to add HPE to its settlement database

Similarly, the Mexican construction giant CEMEX, which is helping build Israel’s apartheid wall and operates four factories in Israel’s illegal settlements on stolen Palestinian land, is also not in the UN database.

Apartheid was wrong in South Africa, and it is wrong in Palestine. It’s time for the UN to act to end government and corporate complicity, and pave the way for accountability, and for freedom, justice and equality for the Palestinian people.

Israel is imposing an apartheid regime. 452 global civil society organizations are calling on the UN General Assembly to act for justice

UN investigation of apartheid in South Africa and subsequent sanctions contributed to ending it. It’s past time for the UN to investigate Israeli apartheid