From Standing Rock to Occupied Jerusalem: We Resist Desecration of our Burial Sites and Colonizing our Indigenous Lands

Open letter of support to the Standing Rock Sioux Tribe 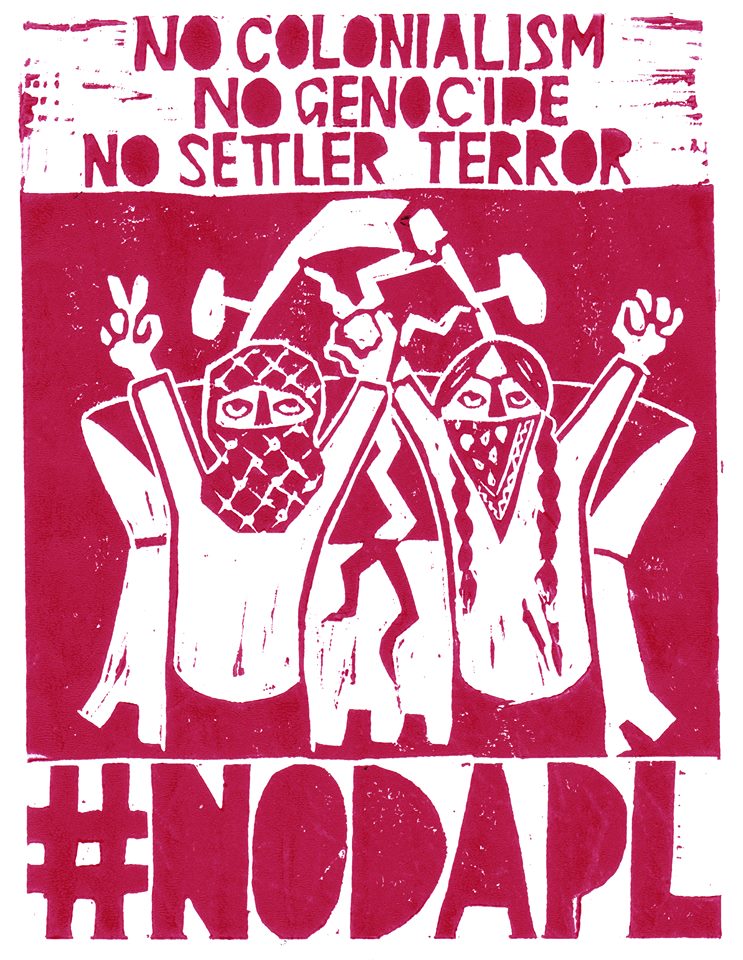 The Palestinian BDS National Committee (BNC), the largest coalition in Palestinian civil society that leads the global BDS movement, sends a message of solidarity to the sovereign Standing Rock Sioux Tribe. The people of Palestine supports you and all those standing with you right now in North Dakota to protect your tribal lands and resist the desecration and destruction of your sacred burial sites at the hands of the Energy Transfer Partners corporation and the Dakota Access Pipeline they are building.

The BNC supports the restoration of all lands guaranteed by treaty to the Standing Rock Sioux and all other indigenous nations. As indigenous Palestinians, we pledge to stand in solidarity with indigenous peoples around the world, including in Turtle Island, in their struggles for justice, self-determination, restoration of rights and respect for their heritage.

Palestinians understand all too well how settler-colonial authorities use resource extraction and other economic and bureaucratic pretences as a way to solidify control over indigenous land and dispossess indigenous people. When we look at Standing Rock, we see our indigenous sisters and brothers defending their land, their identity, their dignity and their heritage.

Your resistance to the pipeline project defends not only the rights of all those who utilize the watershed of the Missouri river from potential environmental catastrophe; it ultimately defends all of us from continued fossil fuel extraction at a time when climate change threatens us all.

When we look at Standing Rock, we also see the attempts of authorities with a still-prevalent colonial mentality to vilify, criminalize, and ultimately disappear indigenous people on their own land.

The Palestinian people have firsthand experience with a colonial power desecrating our burial sites, destroying our indigenous communities, appropriating our culture, and otherwise gradually erasing our centuries-old heritage.

Israel’s regime of occupation, settler-colonialism and apartheid, with the help of the US-based Simon Wiesenthal Center, has ruthlessly destroyed and desecrated large portions of the ancient Palestinian Ma’manullah, or Mamilla, Cemetery in Jerusalem to build the so-called “Museum of Tolerance,” without any sense of irony. Mamilla is a Muslim burial ground and holy site believed to date back to the 7th century. Numerous Sufi saints and thousands of other Arab officials, scholars, notables, and Jerusalem Palestinian families, including companions of the Prophet Muhammad, have been buried in the cemetery over the last 1000 years.

Since 2010, the Center for Constitutional Rights in the US and the Campaign to Preserve Mamilla Cemetery, led by Palestinian figures with direct connection to some of those buried in Mamilla, have worked to halt construction of the new facility and preserve what remains of the site.

The BDS movement has learned much from and has been profoundly inspired by the history of resistance to other settler-colonial projects, such as the more than 500 years of indigenous resistance to the genocidal European colonialism in the Western Hemisphere, including the United States. Your tribe and your many allies are part of a grand tradition of resilience and resistance in the face of dispossession of ancestral lands, cultural destruction, forced relocation and ethnic cleansing, brutal wars and genocide.

We owe the indigenous people of Turtle Island a great debt for lighting the way and showing what it means to resiliently resist colonialism generation after generation for more than half a millennium.

The BNC was dismayed but not surprised to learn that the multinational security corporation G4S has been contracted to provide security services for the pipeline construction on your land by Energy Transfer Partners. G4S is involved in human rights abuses around the world including in Palestine, where the company provides services to illegal Israeli colonies, to military checkpoints, and to prisons that are infamous for using torture and inhumane treatment against Palestinian prisoners, including children.

We were particularly horrified to learn that on September 4 defenders of your ancestral land were attacked with dogs and pepper spray, a chemical weapon, used by a different private security company hired to protect pipeline construction.

The BNC calls for intensifying worldwide boycott and divestment campaigns against G4S and all private security companies that violate our human rights and use weapons and violence against the indigenous people whose land they are operating on and against oppressed communities the world over.

Once again, violence and brutality are being used to attempt to control a people standing up for their land, their culture, and the Earth. Once again, the resistance will not be contained or curtailed by the violence and intimidation tactics of the oppressors.

The BNC is committed to building stronger ties of solidarity between our peoples and movements, and we will work with our partners in North America to make this a reality. From Palestine to Standing Rock, we shall stand united against colonialism, corporate criminality and for our inalienable right to freedom, justice and equality.