Seattle educator and union member Emma Klein says, "Educators and institutions from around the world have come forward, as part of a vibrant and growing international movement in opposition to Israeli colonization and apartheid. We call on others to join us." 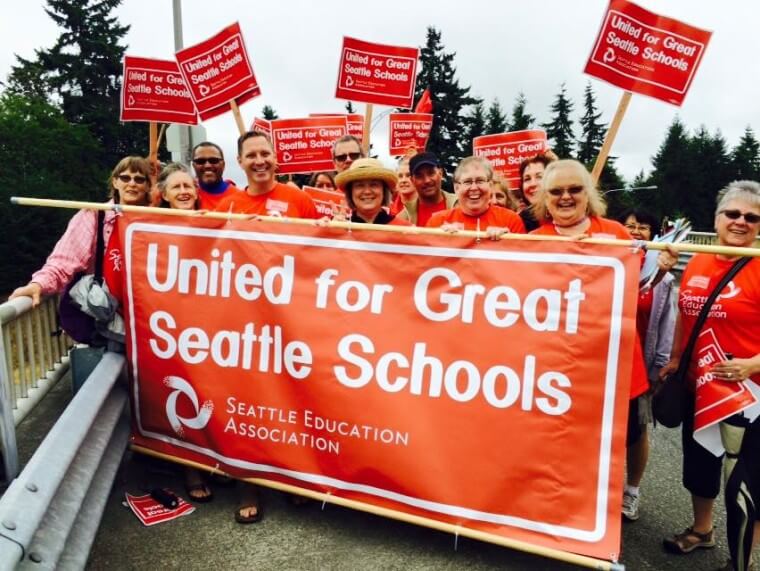 The Seattle Education Association (SEA) has passed a resolution expressing solidarity with Palestine and endorsing the Boycott, Divest, and Sanction movement (BDS). The resolution also demands an end to collaboration between the Seattle Police Department and Israeli military.

“The SEA leadership will use all the existing means of communication (email, Facebook, texts, and any other social media the union uses) to encourage all SEA members and community allies to learn about these issues and to encourage people in their communities to stand in solidarity with unions and oppressed people in Palestine,” declares the resolution.

“As a Jewish Educator, I am proud to be a member of SEA,” Seattle educator and union member Emma Klein said in a statement. “Our Representative Assembly took a bold, vocal stand against injustice from Seattle to Palestine and called attention to the inexcusable relationship between Seattle Police and Israeli military and police. The SEA Recommendation is not an isolated action.  Educators and institutions from around the world have come forward, as part of a vibrant and growing international movement in opposition to Israeli colonization and apartheid.  We call on others to join us.”

These sentiments were echoed by Cameron Payne, a Palestinian-American educator and union member. “It’s wonderful to see that our union stands by that sentiment when it comes to our Palestinian brothers and sisters who are being denied accessible and equitable education in Gaza and the West Bank, including Jerusalem,” said Payne. “I hope this mobilization will continue because for us, this is just the beginning.”

The United Educators of San Francisco and chapter chairs of the United Teachers of Los Angeles passed similar resolutions recently. These moves have led to swift backlash from pro-Israel groups. A coalition of organizations (including the Coalition for Jewish Values and Alliance for Constructive Ethnic Studies) recently sent American Federation of Teachers President Randi Weingarten a letter demanding that she take action against the unions.

“This is a terrible message to send at a moment when clarity and leadership are needed, reads the letter. “We saw once again in recent weeks how inflammatory and dishonest anti-Israel rhetoric, when left unchallenged, can escalate to physical attacks on Jews. It is unacceptable that the teachers’ union you head has affiliates that are using the AFT’s name and infrastructure to promote this kind of hateful rhetoric.”