Quotes from signatories of Boycott Eurovision 2019 artists’ letter published in The Guardian.

Quotes from signatories of the Boycott Eurovision 2019 artists’ letter published in The Guardian:

"My job has long been to write about news. If I write about the proven and ongoing collusion between the US, Australia and those Israeli forces occupying Palestine, I do it only in small, independent media. There is no way to speak or write of this abhorrence in mainstream news without censure. This is not to make the case for the rights of me or independent Western journalists. It is to make the case for those with no voice and no rights in Palestine. i.e. if it is difficult for me to speak, it is impossible for them. BDS is their voice. It’s all they’ve got. Let it be heard. To support Eurovision in Israel, even just to hum along, is to stifle that voice. You’ve been asked by the voiceless in Palestine to be a loudspeaker. Turn Eurovision down."

"Eurovision in Israel seems like a typical colonial diversionary tactic…play loud so that no one hears the gurgling of those being slain."

"I stand with the people of Palestine. As an artist and musician, I don’t see how Eurovision can achieve its goal of bringing the world together through music by having its 2019 competition in Israel, while Israel continues to violently occupy Palestine. In respecting Palestinian’s call for a cultural boycott of Israel, I encourage my peers to do the same. We all have a part to play. We cannot remain silent or be complicit in the suffering of Palestinian people."

“I support the boycott Eurovision 2019 campaign because it is unacceptable for Israel to hold Eurovision Song Contest 2019 in Jerusalem and thus legitimise its illegal annexation of the city as the capital of Israel. This is in defiance of the United Nations, which does not recognize Israel's sovereignty over any part of the city.”

“For decades, the state of Israel – in violation of international law – has oppressed and expelled the Palestinians. Israel’s treatment  of Gaza is totally outrageous. The international community must react to those crimes of war.”

“We're already used in our everyday lives to making choices on the basis of ethics and justice. Therefore it's clear that I oppose holding the Eurovision contest in a country that flagrantly violates human rights and international treaties. I'm aware that a letter like this would have been needed many times before, but that is no reason not to act now!”

“The participants in the 2019 Eurovision Song Contest in Israel who believe they will participate in a cultural show will surely be deceived, as the Israeli authorities openly claim that they do not distinguish between political propaganda and culture.”

“When Nelson Mandela visited Dublin soon after his release from prison in Robben Island, I asked him what role the international boycott of South Africa played in the ending of apartheid there. Mandela told me that ‘the boycott was one of the most important weapons in the struggle against apartheid.’ As it was then, so it remains today. This is why I fully support this call for an Irish boycott of the Eurovision 2019 in Israel. We must show the same solidarity to Palestinians living under Israeli apartheid as we did to black people under South African apartheid.”

“When I visited Palestine last year I was utterly appalled by the treatment being meted out to the Palestinian people by the Israeli state. I visited South Africa during the apartheid era and I believe that Israel’s policies of deprivation, discrimination and humiliation are as bad, if not worse, than those perpetrated upon black South Africans. It is frustrating, for those of us who would like to be of some use, to see that it seems impossible to get the ears of governments, and the lamentable UN, to enact some practical expression of support for the forgotten people of Palestine. This is why I think we in Ireland need to stand up and be counted and say, ‘We’re not competing in the Eurovision in Israel’. It’s a small gesture, but it’s what Palestinians themselves are asking of us. It’s the very least we can do to support them.”

“The Israeli government is trying to deflect attention from Israel's continued occupation and oppression of Palestinians by 'rebranding Israel' with art and cultural events. We ask the European public broadcasters to heed the Palestinian call for boycott and refuse to be part of this effort at whitewashing Israel's crimes.”

“Racism, apartheid and war crimes should carry a cost rather than be celebrated. Sadly, the Eurovision Song Contest may contribute to the latter by inadvertently whitewashing Israel's crimes. We urge the European Broadcasting Union to take a stand for equality and justice and refrain from celebrating in Israel at these times.”

“Hectic and volatile times give us the opportunity to choose to be on the right side of history and with minorities. We need to take the path of justice and stand against the oppression, apartheid, and belligerent military occupation that Israel is imposing on the indigenous Palestinian people. Would the European Public Broadcasters have allowed South Africa to participate in the Eurovision at the time of the apartheid regime there? Israel is no different. In fact, Nobel Peace laureate Desmond Tutu compared Israel’s treatment of the Palestinians to the apartheid regime that discriminated against blacks in his native South Africa. We urge the European Broadcasting Union to take a principled stance and not let Israel participate in the 2019 Eurovision Song Contest.”

“The idea that an event like Eurovision can be 'apolitical' is utterly flawed, and the artists performing there will – regardless of their own intentions – find their presence used to justify the ongoing occupation of Palestinian land.”

“I believe in the power of music and culture to build bridges and create solidarity, but this will not be the case if Israel hosts the Eurovision Song Contest. Everything is politics, everything! Time is overripe to be clear about Israel. There is not enough tinsel and Eurovision decoration in the world to cover up Israel’s longlasting assaults on the Palestinian people”

“It is sad to think that Norway will participate in the Eurovision Song Contest. All countries hosting this gigantic event use it to market and embellish themselves to the whole world. It is difficult to imagine Israel telling about apartheid, occupation, military assaults and walls! The wall just stands for something that sharply divides people – in contrast to the European Song Contest’s basic values.”

“To me Eurovision Song Contest is a life affirming celebration of diversity and fun, and such a celebration should not be used to art-wash the Israeli state’s violence and crimes against humanity and the Palestinian people.”

“Eurovision is partying, music and joy. Such an event should not take place in the brutal, occupying and oppressing state of Israel. This is completely wrong and a mockery of the Palestinian people.”

“The musicians and singers of the choir ZPZ Kombinat have endorsed the call in the conviction that holding the Eurosong competition in Israel with all  the glamour, show, shining choreography and music it brings, would mean in the very least smokescreening if not overtly endorsing the genocidal and bloodthirsty policies of the state of Israel  which has been systematically violating the fundamental rights of the Palestinian people for more than five decades with the silent international complicity.”

“Coming off the back of the courageous response from fellow artists who have pulled out of the Meteor festival this week, 14 and counting, great love and respect to each and everyone of them, I would say this: Over the next year, in my view, the two most specifically important strategic, issues facing us, in BDS, in our continuing fight for Palestinian rights are, football and Eurovision! If we can persuade our colleagues in the music industry to boycott Eurovision 2019, and our brothers and sisters in all sports, but soccer in particular, to refuse to compete with Israeli sides, we will be well on the way to defeating apartheid, and much closer to bringing a just, and lasting, peace to the Holy Land."

“In choosing to be a part of the 2019 Eurovision Song Contest - as participants or broadcasters - we all become complicit in a systematic attempt by Benjamin Netanyahu's government  to artwash Palestinian suffering.” 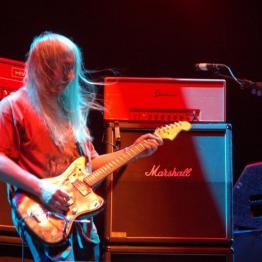