The LAW TRAIN project, aimed at unifying police interrogation methodologies, has generated controversy in Portugal because of vocal opposition to Israel’s participation in the EU’s Horizon 2020 research framework and the human rights abuses perpetrated by the Israeli entities taking part. 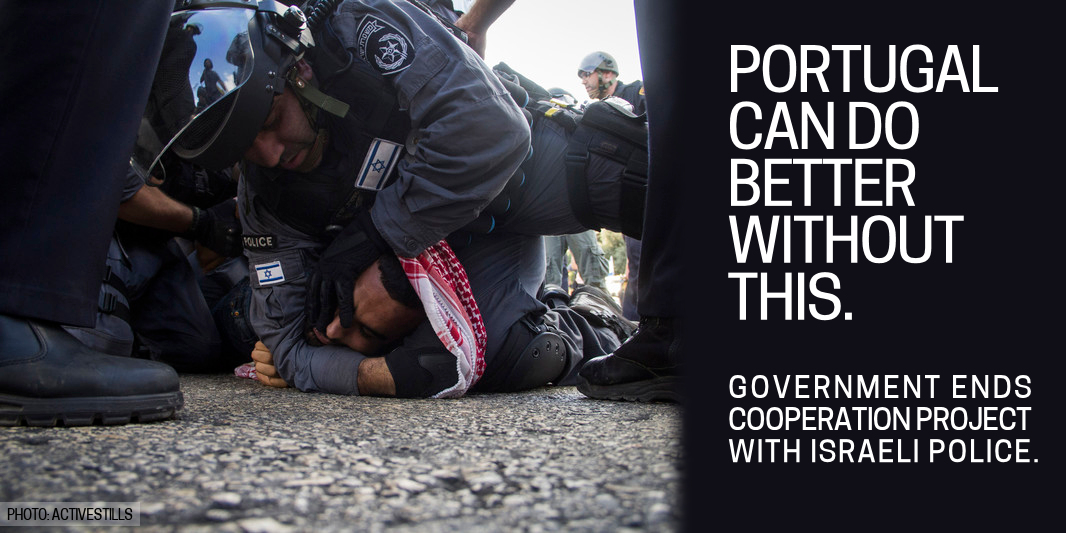 The Portuguese Ministry of Justice announced that it has withdrawn from a joint EU-funded project with the Israeli Ministry of Public Security, the Israeli National Police and Israel’s Bar Ilan university. The LAW TRAIN project, aimed at unifying police interrogation methodologies, has generated controversy in Portugal because of vocal opposition to Israel’s participation in the EU’s Horizon 2020 research framework and the human rights abuses perpetrated by the Israeli entities taking part. The Portuguese government came under heavy pressure from civil society groups campaigning for an end to the cooperation with Israel. Political parties denounced in parliament the routine torture by the Israeli police and the role of the Ministry of Public Security in the illegal detention of thousands of Palestinian political prisoners in Israeli jails.

"This decision by Portugal gives hope to our people and sends a strong message to Israel that there is no business as usual for as long as it continues  military aggression against Gaza and repression in the West Bank. This EU project gives tacit recognition to Israel’s control and military repression of the Palestinian people and turns a blind eye to Israel’s notorious abuse of Palestinians that includes routine torture as an ‘interrogation technique’.”

The five million euro project aims to develop technology to unify methodology for police questioning by ‘improving interrogation skills’ and bridging so-called ‘gaps of culture, legislation, interrogation style’. The police forces involved will contribute with their 'experience in interrogation and fighting crime to develop the system’. The Israeli Ministry of Public Security and Israel’s police are accused by the UN and human rights organisations of carrying out illegal detention practices, routine torture during interrogation and deployment of excessive violence against Palestinian protesters.

The Federal Public Service of Justice of Belgium and the Ministry of Interior of Spain/Guardia Civil, private businesses, universities and research institutions remain involved in the project as part of the EU Horizon 2020 research framework. Activist groups in Spain and Belgium have vowed to step up campaigning to end the project after this latest victory.

“We thank Portuguese civil society organizations and political parties that have worked together with us to build effective solidarity based on the Boycott, Divestment and Sanctions (BDS) call and ensure there will be no risk of proliferation of illegal Israeli practices and inhumane treatment through this project into their own Portuguese justice system,” said Juma’.

An unprecedented Portuguese coalition of solidarity groups, human rights organisations, and anti-racism campaigners as well as the association representing the officers of the country’s 1974 revolution came together following a report by Stop the Wall that exposed the cooperation and its consequences on the human rights and freedom of Palestinians. The Portuguese Communist Party and the Green Party grilled the Foreign Affairs Ministry and the Justice Minister on the issue.

The Movimento pelos Direitos do Povo Palestino e Pela Paz no Medio Oriente (MPP), initiator of the of civil society coalition against the project, has declared:

“We congratulate the decision of the Ministry of Justice to put an end to the participation of the Portuguese Police in the LAW TRAIN project. The withdrawal of the Portuguese government from the project is a victory of all the forces that in Palestine, in Portugal and in Europe called for an end to this project of cooperation with Israel's repressive apparatus.”

This news comes as 34 years old Palestinian Bilal Kayed continues his open-ended hunger strike  since June 2015. There are currently over 7000 Palestinian prisoners in Israeli jails, many of them detained without charge. The UN Committee against Torture in May once again exhorted Israel to prohibit torture and denounced ongoing practices of torture and ill-treatment in the interrogation process. Human rights organizations highlight the brutal treatment particularly against Palestinian minors.

“This latest victory is another sign that European governments are waking up to the problematic of having Israel as a partner in projects that risk undermining basic freedoms, democracy and  human rights. There is still a long way to go in order to end Europe’s complicity with Israeli apartheid. LAW TRAIN itself continues with the remaining participants and is only one of many military and security projects funded by the EU Commission with taxpayers money.”