Today, on Palestinian Prisoners’ Day, we the undersigned Palestinian civil society and human rights organisations salute all Palestinian political prisoners, especially those engaging in brave civil disobedience through ongoing hunger strikes in protest to the ongoing violations of human rights and international law. Emphasizing imprisonment as a critical component of Israel’s system of occupation, colonialism and apartheid practiced against the Palestinian people, we call for intensifying the global Boycott, Divestment and Sanctions (BDS) campaign to target corporations profiting directly from the Israeli prison system. In particular, we call for action to be taken to hold to account G4S, the world's largest international security corporation, which helps to maintain and profit from Israel’s prison system [1], for its complicity with Israeli violations of international law.

Imprisonment of Palestinians is a form of Israeli institutionalized violence encompassing all stages of the incarceration process. Palestinian political prisoners face systematic torture and ill-treatment during their arrest and detention at the hands of the Israeli military and are frequently and unjustifiably denied family and lawyer visits. Wide-ranging and collective punishments, including prolonged periods of isolation, attacks on prisoners by special military forces and denying access to education are used against Palestinian prisoners in an attempt to suppress any form of civil disobedience within the prisons. As of April 2012, there were 4,610 Palestinian prisoners held in Israeli prisons, including 203 child prisoners, 6 female prisoners and 27 members of the Palestinian Legislative Council. 322 Palestinians are currently held in administrative detention, without charge or trial.[2]

The severity of injustice and abuse suffered by Palestinian political prisoners has been the drive for many prisoners to begin hunger strikes at different intervals in protest against harsh prison conditions, torture and ill treatment and Israel’s arbitrary use of administrative detention. While the recent hunger strikes of Khader Adnan, who ended his hunger strike after 66 days, and Hana Shalabi, who ended her hunger strike after 43 days, resulted in individual agreements, Israel and the Israeli Prison Service’s policies therein remain unchanged and are now aimed at containing the hungers strikers through punitive measures as well as cutting off their contact with lawyers and family. Today, an estimate of over 1,000 Palestinian political prisoners are reported to have joined in an open hunger strike in addition to at least 8 others already engaged in an open hunger strike, including Bilal Diab and Thaer Halahleh, on hunger strike since 29 February 2012.

In light of this increasing campaign of civil disobedience from within the prisons, we demand accountability for all corporations that both enable and directly profit from Israel’s continued violations of Palestinian prisoners’ rights being committed with impunity. Specifically, we call for action to hold to account G4S, the British-Danish security company whose Israeli subsidiary signed a contract in 2007 with the Israeli Prison Authority to provide security systems for major Israeli prisons.[3] G4S provided systems for the Ketziot and Megiddo prisons, which hold Palestinian political prisoners from occupied Palestinian territory inside Israel in contravention of international law.[4] The company also provided equipment for Ofer prison, located in the occupied West Bank, and for Kishon and Moskobiyyeh detention facilities, at which human rights organisations have documented systematic torture and ill-treatment of Palestinian prisoners, including child prisoners.[5] G4S continues to provide equipment to Israeli prisons.[6]

Moreover, G4S is involved in other aspects of the Israeli apartheid and occupation regime: it has provided equipment and services to Israeli checkpoints in the West Bank that form part of the route of Israel’s illegal Wall and to the terminals isolating the occupied territory of Gaza. G4S has also signed contracts for equipment and services for the West Bank Israeli Police headquarters and to private businesses based in illegal Israeli settlements.[7] A panel of legal experts concluded that G4S may be criminally liable for its activities in support of Israel’s illegal Wall and other violations of international law.[8]

We welcome the news that the European Union has announced that it has not renewed its contract for security services with G4S [9] following pressure from groups campaigning for Palestinian rights, and salute the previous decision of the Edinburgh University Student Association to block its contract with G4S.[10] We call upon other public and civil society institutions and also on private companies to follow suit and end their relationships with this company that acts in service of Israeli apartheid and other violations of international law. We demand that the Palestinian leadership bans G4S from private and public tenders, and ask for the strict application of the boycott legislation in the Arab world against companies cooperating with the Israeli prison system.

We also note that G4S is being actively opposed by other civil society groups elsewhere in the world for its role in controversial deportation and imprisonment regimes, abuse of workers rights, violations of universal human rights standards and its involvement in the privatisation of public services. Let us work together to expose not only G4S, but also the roles of imprisonment and private security companies as political tools to silence and intimidate communities all over the world.

Amid hunger strikes and the highly publicized prisoner exchange deal in October, Palestinian prisoners’ issues have gained recent attention in international spheres. However, despite this increased focus and the criticisms of these practices by United Nations bodies, there has been no institutional changes made by Israel in regard to the human rights violations being committed against Palestinian political prisoners and detainees.[11] In an attempt to counter Israel’s unwillingness to change its policies and the lack of accountability for its countless human rights violations, alternative measures such as preventing participation by companies such as the G4S proves to be one of the few remaining effective steps towards pressuring Israel to comply with international law. It is time overdue to break this chain of international complicity. 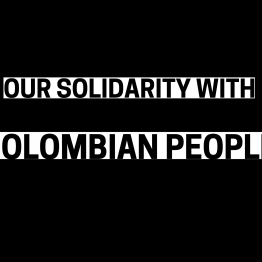 BNC Statement of Solidarity with the Colombian people