To the creators of the Norwegian “National Apology” Artistic Video,

We, the undersigned Palestinian performing arts organizations and cultural centers, salute your creative solidarity gesture with the struggle for Palestinian rights under international law.

Your video art work, which imagines the National Theater of Norway apologizing for its collaboration with Israel’s national theater, Habima, exposes Habima’s reality as an institution that is deeply involved in whitewashing and justifying the crimes of Israel’s regime against the Palestinian people.

You have also brilliantly highlighted the ethical obligation of cultural institutions and cultural workers worldwide to end their complicity in Israel’s occupation and apartheid, as was done against the apartheid regime in South Africa.

Connecting struggles against human rights violations abroad with domestic struggles for real democracy, social and economic justice, as well as the fight against racism and discrimination, your video underlines the crucial need for intersectional struggles against all forms of oppression.

Heeding and promoting the 2005 call of Palestinian civil society to impose Boycott, Divestment and Sanctions (BDS) measures against Israel until it complies with its obligations under international law, you have taken on a “gigantic load of personal risk,” given the well-oiled war of repression and McCarthyism that  Israel and its lobby groups are waging against the BDS movement and indeed all solidarity with the Palestinian struggle for freedom, justice and equality.

In its association with the government, Habima serves to re-brand Israel’s image as a vibrant culture, covering up its grave human rights violations committed against Palestinians. Furthermore, Habima is directly involved in Israeli violations of international law by performing in colonial settlements that are deemed illegal under the Fourth Geneva Convention.

While arts organizations in Norway, across Europe, in North America and beyond continue to collaborate with Habima and other Israeli cultural institutions that are part and parcel of Israel’s denial of our rights under international law, Israel cynically uses this business as usual to whitewash its intensifying crimes.

In the occupied Gaza Strip, 1.8 million Palestinians are strangled by Israel’s deadly siege, denied adequate electricity, clean water, and the ability to go fishing -- and subject to recurrent Israeli massacres that have left thousands of civilians dead, including hundreds of children. The prominent Norwegian doctor Mads Gilbert has witnessed such assaults on Gaza during Operation Protective Edge and described it as a “totally shocking experience of the mercilessness of the Israeli war machine.”

Thousands more Palestinians are held without charge and tortured in Israeli prisons, including children who are systematically subjected to torture and humiliating treatment, strip searched, and violently snatched from their homes and families in the middle of the night.

In occupied Jerusalem, in the Jordan Valley and in the Naqab (Negev), Israel’s ethnic cleansing of entire Palestinian communities is proceeding at a fatal rate, making thousands of Palestinians homeless in their homeland.

Israel’s crimes against the Palestinians have not spared artists, who are often denied their right to free movement and even their right to free expression. Last December, a Palestinian clown named Mohammed Abu Sakha -- who has devoted years to entertaining children, especially those with disabilities -- was arrested on his way to work at the Palestinian Circus School. Despite calls from Amnesty International, the 23-year-old clown is still being held without charge or trial, like thousands of other Palestinians.

In Norway, Sør-Trøndelag was the first country to boycott apartheid South Africa in the last century. In the same spirit, in 2010, one hundred Norwegian public figures signed a petition, led by Egil Drillo Olsen, the coach of the national football team, to support the academic and cultural boycott of Israel.

Your “National Apology” work revives these Norwegian efforts to express meaningful solidarity with the Palestinian struggle for freedom. We hope it will convince the National Theatre of Norway and other cultural institutions not to lend their good names to Israeli propaganda. We appeal to them to stand on the right side of history and to refrain from crossing our boycott picket line. They would thus join the ranks of notable figures like Lauryn Hill, Danny Glover, Elvis Costello, Alice Walker, Roger Waters, Brian Eno, Miriam Margolyes, Mike Leigh, Gil Scott-Heron, and artists from Public Enemy and Sonic Youth, who have respected the BDS guidelines.

Since Israel uses its cultural institutions to fig-leaf its crimes against the Palestinians, it is ethically incumbent upon people of conscience worldwide to endorse, or at least respect, the cultural boycott of Israel as a contribution to the struggle for freedom, justice and equality. 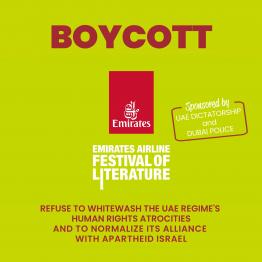