Industri Energi, a trade union for workers in the energy and heavy industry sectors, had been using the company to provide security at its offices in Stavanger in the south of Norway.

Announcing that the contract will now be terminated, union leader Leif Sande told Norwegian newspaper Klassekampen that the move was taken as “an act of solidarity with the struggle of the Palestinian people.”

G4S is contracted to provide and maintain security equipment at Israeli prisons. The equipment includes monitoring systems, cameras and control rooms in which Palestinians are detained without trial and subjected to torture. The company also provides equipment and services to Israeli checkpoints and settlements in the occupied West Bank.

The University of Oslo and both businesses and not-for-profit groups across Europe have also cut their ties to G4S as part of an international campaign that was launched by Palestinian prisoner organizations in April 2012.

In the UK, the East London Teachers Association (ELTA) has just passed a motion condemning G4S’s complicity in Israel’s prison system and calling on a local authority to terminate its contracts with the company. G4S has a 22-year contract to provide “a comprehensive integrated facilities management solution” to 25 London schools.

A statement on the website of London-based campaign group War on Want said:

The recent ELTA motion calls on the local authority to withdraw contracts with G4S for schools in the area: “This association feels that it is completely inappropriate for a company which is complicit in unlawful detention and torture to provide services in Tower Hamlets schools. It, therefore, agrees to approach the local authority to request that it withdraw from its contract with G4S due to that company’s profoundly unethical behavior or to get an assurance from the company that it will cease to sell its services to the Israeli Prison Service by the end of 2015.”

Speaking about the resolution, Alex Kenny, ELTA secretary, said, “I am pleased that East London NUT [National Union of Teachers] has joined the campaign to highlight the role played by G4S in the mistreatment of Palestinian children. Such treatment is incompatible with the aims and values of the National Union of Teachers. The NUT, locally and nationally, has a long record of supporting the rights of the Palestinian people to peace and justice. We are working closely with Action for Palestinian Children and other organizations to bring about change in this area and hope that we can work with the local authority to put pressure on G4S.”

The ELTA was formed in 1870 and is one of the oldest associations that make up the National Union of Teachers.

G4S has sought to deflect pressure from campaigners by announcing that it intends to pull out of a limited number of contracts relating to its operations in illegal Israeli settlements by 2015. However, G4S has not yet withdrawn from single contract and has not made any public commitments or statements about its extensive role in prisons inside Israel. The company remains deeply complicit in Israel’s abhorrent prison system.

In August, two campaigners who staged an eight-hour rooftop occupation at the corporate headquarters of G4S in Crawley, just outside London, were found not guilty of aggravated trespass. Significantly, a G4S representative told the court hearing the case that the Crawley head office of G4S had overall responsibility for the firm’s contracts with the Israeli government. 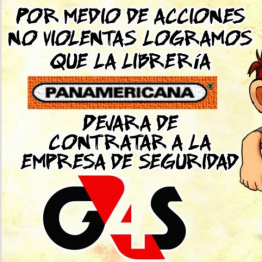