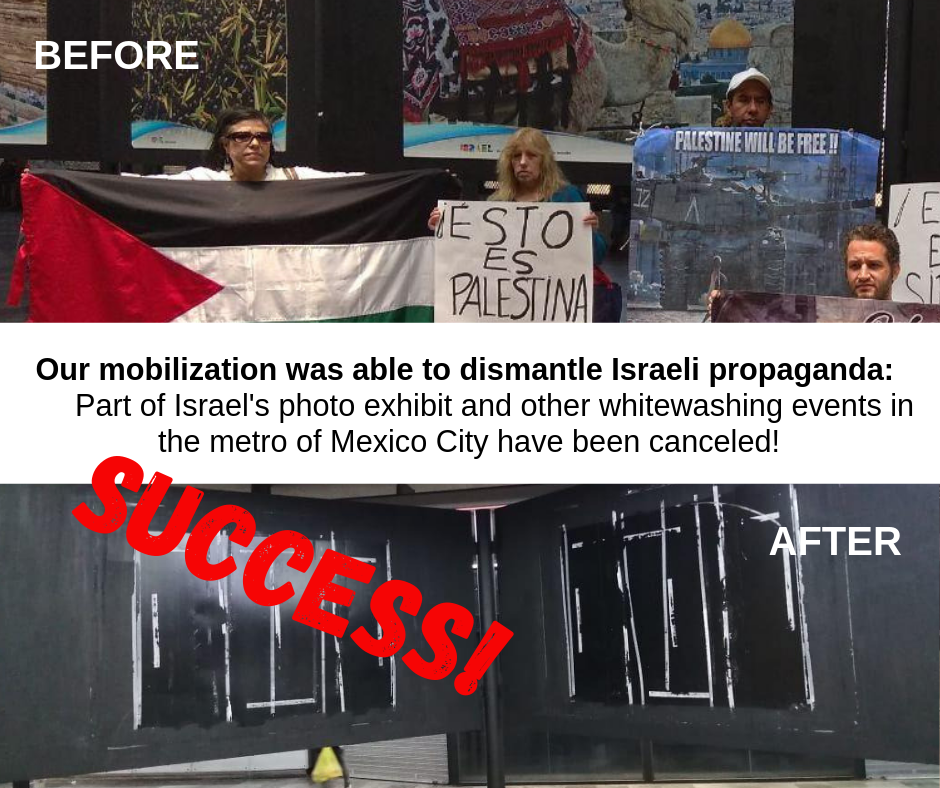 Following protests, the Mexico City Metro removed 12 photographs from the exhibition "A look at Israel" sponsored by Israel’s embassy in Mexico. The exhibit was installed in two metro stations as part of a month of activities, also including dances and a week of film projections. A dance show organized by the Israeli embassy on May 15, Nakba Day, and most of the film screenings were also canceled following protests by supporters of Palestinian rights.

The Mexico City Metro transports over 5.5 million passengers daily across the city.

Mexico City asked for the photographs to be removed after almost 40 Mexican organizations, unions and networks and diplomatic missions from Palestine, the Arab world and member states of the Organization of Islamic Cooperation raised concern over the exhibit because it did not respect international law and Mexico’s official position on the territories Israel occupies.

The city administration took down the 12 photographs immediately after being  notified they falsely presented images of the Golan Heights, East Jerusalem and the West Bank as part of Israel. These territories are subject to Israel’s brutal military occupation. According to resolution 242 of the United Nations Security Council, passed in 1967, these territories are considered occupied and therefore do not belong to Israel, a position adopted by Mexico that same year, and that has remained unchanged since.

The fact that the Israeli embassy lied by presenting those territories as Israeli is no coincidence. It is part of Israel’s  strategy to legitimize its attempts to illegally annex Palestinian and Syrian land. We deeply appreciate Mexico City’s swift action and respect of international law.

Civil society groups are protesting  the entire month of activities organized by the Israeli embassy in the Mexico City Metro, including the remaining photos and events, as it is part of Israel’s attempts to cover-up its regime of apartheid and military occupation using art and culture.

The Israeli government routinely uses art and culture to cover-up its crimes against the Palestinian people and violations of international law. We send a heartfelt appeal to Mexico City and human rights organizations in the city to refuse all arts shows or exhibits that are sponsored by the Israeli government or its embassies until Israel respects Palestinians’ full rights.