November 22, 2019
/ By
Palestinian BDS National Committee (BNC)
/
Australia
The MUA Sydney branch pledged to not buy HP products and called for a complete boycott of HP products and divestment from HP companies until they cancel all contracts that aid Israel’s violation of Palestinian rights. 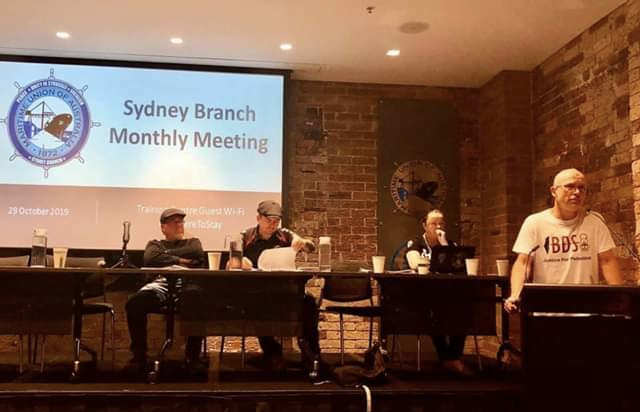 In keeping with its history of solidarity with global struggles for justice and equality, the Maritime Union of Australia’s Sydney Branch joined the international Boycott HP campaign in its meeting on 29th October. Members pledged to not buy HP products and called for a complete boycott of HP products and divestment from HP companies until they cancel all contracts that aid Israel’s violation of Palestinian rights and international law. They also committed to raising awareness among union members regarding HP companies’ complicity with Israel’s crimes.

The union had in the past stood in solidarity with the South African anti-apartheid movement, and the same values of freedom, justice and equality are at the heart of the Palestinian Boycott, Divestment and Sanctions movement, of which the Boycott HP campaign is a part.

We are calling upon HP companies, HP Inc and HP Enterprise as well as their spin-off DXC Technology to end all the contracts that supply Israel with the means - technology, expertise and equipment - to violate Palestinian human rights and international law. Until they do so, we call for boycotts and divestments against these companies.

We stand in solidarity with the Palestinian struggle for freedom and justice as we continue to stand with all exploited and oppressed peoples. Boycotts assisted in bringing apartheid to an end in South Africa and we hope to bring it to an end for Palestinians.

Don’t Buy HP Products is one of our key campaigns. We have been organizing actions and building awareness on how HP companies facilitate the occupation, apartheid and colonization of Palestinian people. We plan to take this campaign to more unions that stand for equal human rights.

HP Inc is the sole provider of computers to the Israeli occupying forces. HP Enterprise provide the servers for Israel’s population registry that enforces apartheid. In the past, HP has provided the technology for the Basel system for biometric access on Israel’s checkpoints as well as database for Israeli prisons. The Palestinian BDS National Committee calls for boycott and divestments against HP companies until they demonstrate that they are no longer complicit in Israel’s oppression of the Palestinian people.

Maritime Union of Australia, Sydney Branch, is among the growing number of trade unions that have joined the Boycott HP campaign and continue to strengthen it. Earlier this year, UK’s second largest union, Unite the Union, joined the campaign. The largest trade union of the Netherlands, Federatie Nederlandse Vakbeweging (FNV), dropped HP as a partner in their offers to their members in April.

The motion passed by the Maritime Union of Australia - Sydney Branch 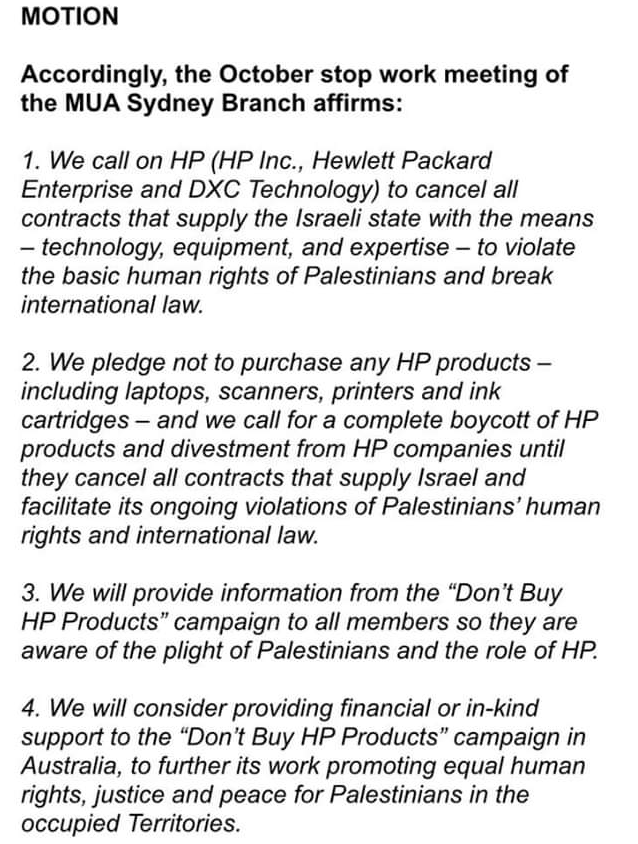