August 11, 2022
/ By
Palestinian Federation of Unions of University Professors and Employees (PFUUPE)
/
Australia

The 6,000 members of the Palestinian Federation of Unions of University Professors and Employees (PFUUPE) "know that Elbit Systems markets its weapons around the world, including to other oppressive regimes, as 'battle-proven' and 'field-tested,' and that "they are the subjects of those tests." 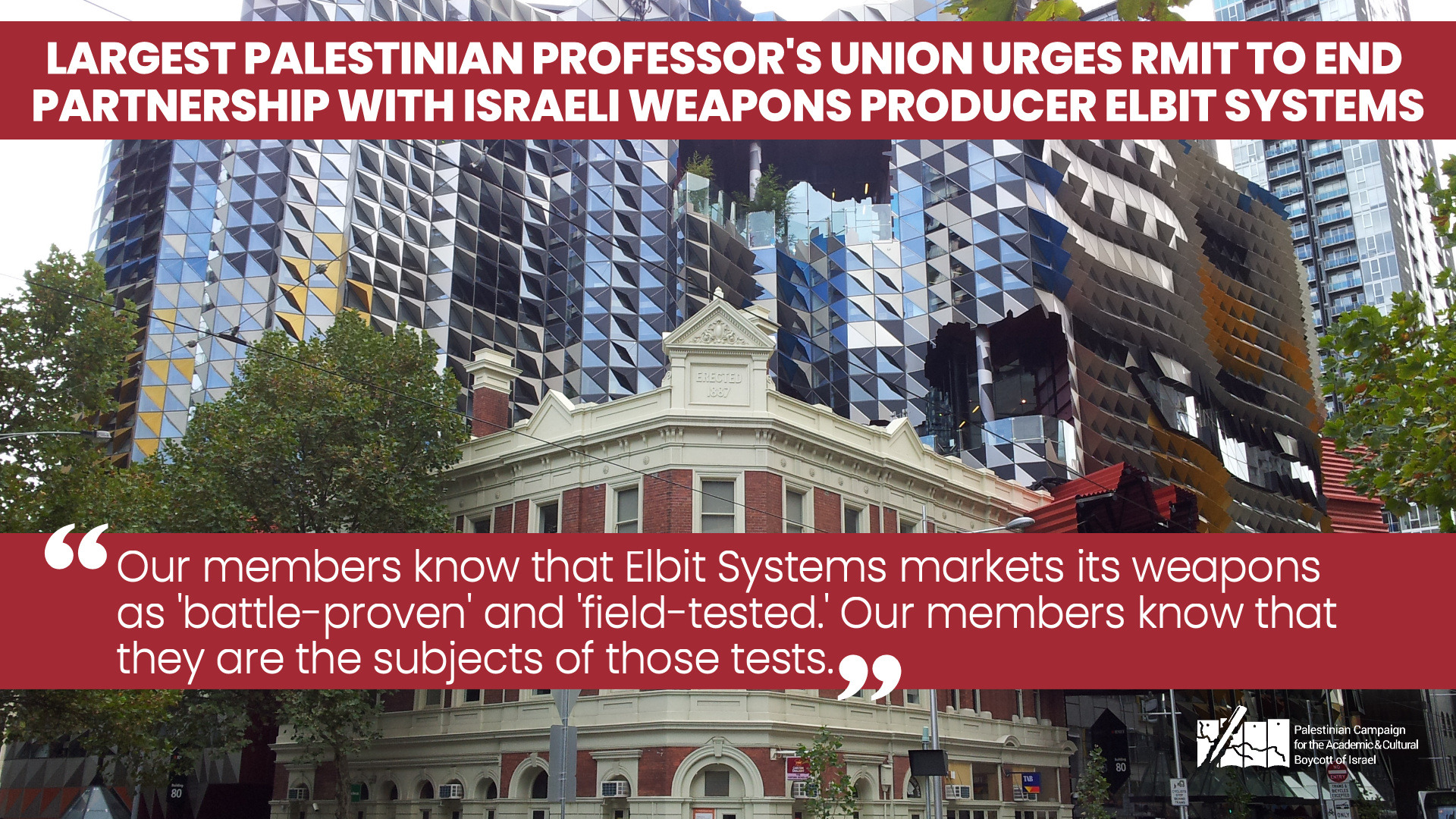 To the attention of:

We are writing to you as the Palestinian Federation of Unions of University Professors and Employees (PFUUPE), the principal faculty union in the occupied Palestinian territory. We represent 6,000 Palestinian university professors and staff at more than a dozen higher education institutions.

We were shocked to learn that the Royal Melbourne Institute of Technology (RMIT) has partnered with apartheid Israel’s weapons producer, Elbit Systems. We urge you to suspend all collaboration with this company.

We would first like to explain our use of the term apartheid. Many of our members, and Palestinian scholars in general, have for decades studied and documented Israel’s regime of racial domination and systematic oppression of Indigenous Palestinians, concluding that it constitutes the crime against humanity of apartheid, as defined in international law. Recently prominent Israeli and international human rights organizations, including Amnesty International, Human Rights Watch, and B’Tselem, have issued detailed reports coming to the same conclusion.

Partnering with institutions or companies complicit in Israel’s apartheid regime contributes to prolonging Israel’s violent rule over Palestinians and comes with serious legal and moral concerns.

Partnering with a company that works closely with that regime to produce weapons and repressive surveillance systems used against not only Indigenous Palestinians but other oppressed communities around the world takes those concerns to an entirely different level.

While not an international household name, Elbit Systems is certainly notorious among Palestinians, including our members.

Our faculty members in Gaza and their students have lived through repeated Israeli military assaults, including the most recent attack, which has killed at least 44 Palestinians, including 16 children, and damaged infrastructure including 1,600 homes and parts of Al Quds University. They know that Elbit Systems provides 85% of the military drones used by Israel in those assaults. They know that drones, mostly supplied by Elbit Systems, killed 164 Palestinian children in Gaza in 2014 alone. They know that during Israel’s bombardment of Gaza in May 2021, the Israeli Air Force dropped Elbit-produced MPR 500 bombs on Palestinian civilians. They know the constant sound of Elbit drones buzzing in the skies of Gaza, interrupting their studies and research and exacerbating their traumas.

As those suffering under a purely man-made disaster, including an Israeli-imposed 15-year land, sea and air blockade made possible by Elbit technology, please understand that it will be of little interest to our members in Gaza that your particular project with Elbit Systems is reportedly for civilian use during natural disasters. This does nothing to alleviate the moral and legal concerns.

Our members stuck at crowded military checkpoints while trying to get to their university, or driving for hours to get around Israel’s apartheid wall that cuts through and annexes large swaths of the occupied Palestinian West Bank, know that Elbit Systems produces the surveillance technology used on that oppressive infrastructure to keep Palestinians caged in ever diminishing Bantustans.

Our members also know that Elbit Systems markets its weapons around the world, including to other oppressive regimes, as “battle-proven” and “field-tested.” Our members know that they are the subjects of those tests.

Our members know that Elbit Systems provides surveillance technology for the US wall on the border of Mexico backed by former president Donald Trump and specifically-built surveillance towers that violate the privacy and sovereign rights of the Tohono O’odham Nation. Our members know that cyber weapons produced by Elbit Systems and sold to Ethiopia were used to spy on opposition members.

In short, our members, and Palestinians as a whole, know that Elbit Systems provides the deadly technology enabling Israel's apartheid rule and supports oppressive regimes around the world.

RMIT’s website includes a land acknowledgement statement and emphasizes its respect for Indigenous peoples of Australia.

We ask that you also show respect for Indigenous Palestinians living under Israel’s Elbit-powered regime of settler-colonialism and apartheid by ending RMIT’s collaboration with Elbit Systems. It is the only option if RMIT intends to uphold its commitment to “making a difference both locally and globally.”

Palestinian Federation of Unions of University Professors and Employees