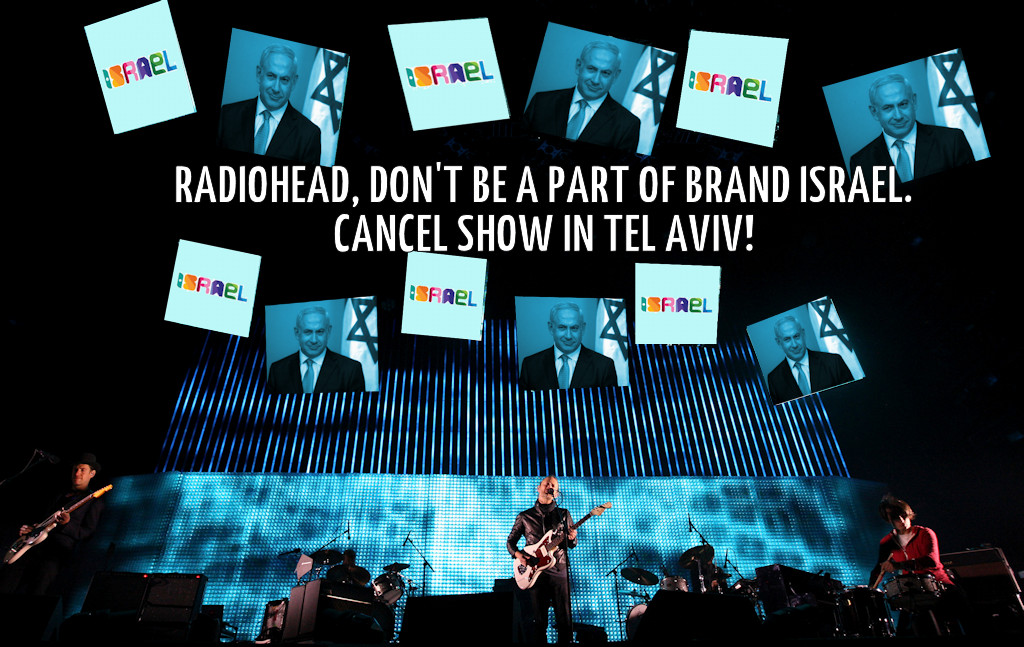 Radiohead, don't be a part of Brand Israel.

We are Israeli musicians writing you about your scheduled performance in Israel this July 19. It is our understanding that the public appeal urging you to respect the Palestinian picket line and cancel this concert was published only after a private appeal went unanswered. Likewise, we will only publish a public letter if we are unable to engage with you in private.

We would like to respond directly to a comment you made in Rolling Stone. Referring to Roger Waters, Desmond Tutu and the many other artists and public figures who’ve urged you to respect the call for cultural boycott, you said that you “just can’t understand why going to play a rock show or going to lecture at a university [is a problem to them].”

We have great respect for Roger Waters and Desmond Tutu, but their problems are not the point, as they would surely be the first to concede. Waters, Tutu and the others have reached out to you in response to a request for solidarity from Palestinians. The call for cultural boycott to end grave Israeli violations of human rights has overwhelming support among Palestinians. To them, it is clear that to entertain their oppressors at this point in time shows indifference to their suffering and helps perpetuate it.

Every international artist who plays in Israel serves as a propaganda tool for the Israeli government. International performances in Israel serve the government’s agenda of whitewashing its war crimes against Palestinians by creating a “business as usual” atmosphere wherein the status-quo, a reality of colonization and military occupation for Palestinians, becomes normalized. Maintaining this atmosphere relies heavily on creating a facade of Israel as a hip, advanced, progressive state with a vibrant and diverse cultural scene.

In 2005 the Israeli foreign ministry decided to invest in a public relations strategy to “re-brand Israel,” diverting attention away from Israeli crimes by highlighting Israeli cultural and scientific achievements. Needless to say, the government which just celebrated 50 years of brutal military rule over the occupied Palestinian West Bank and Gaza Strip should not be assisted, even unintentionally. The government which legislated to suppress even the commemoration of the displacement of the majority indigenous Palestinian population in 1948 should not be given the chance to claim that artists and musicians are endorsing its policies.

This effect of a performance in Israel can not be undone even with the best intentions. Any statement that you might wish to make on stage would be overshadowed by the fact that you would be crossing an international picket line established by the vast majority of civil society organizations in Palestine. On the other hand, if you decided not to play, it would send a strong message to the Israeli government that their racist policies and grave violations of Palestinian human rights will not be normalized. It would also send a message to the people of Palestine that you’re with them in their struggle in a very real way.

Israel is increasingly notorious for being a place that forward-thinking artists who care about equality and freedom want little to do with. We are confident that this reality will contribute to moving the Israeli government to change its unjust policies, and help convince companies to divest from Israel, just as they did in apartheid South Africa. Canceling your show will disrupt the “business as usual” facade that international performances in Israel perpetuate.

Please reconsider violating the Palestinian call for boycott. We remain at the ready to talk to you about any questions or concerns that you may have, and continue to welcome a conversation with you.