Palestinian civil society reacts to Israel’s "Jewish Nation-State Law​" which unambiguously defines Israel as a state that belongs exclusively to the “Jewish people.” This is despite the fact that one in five citizens of Israel is an indigenous, non-Jewish Palestinian. 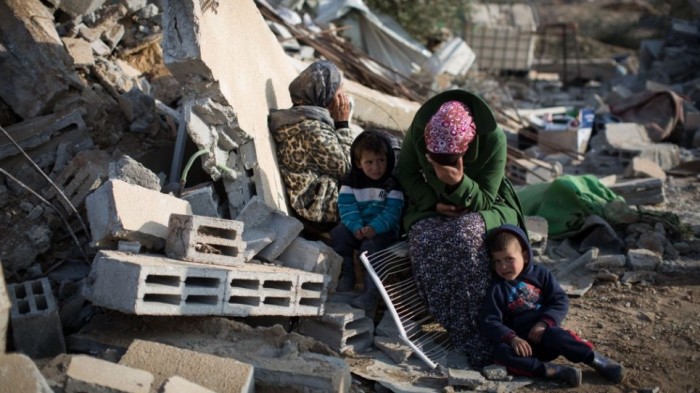 (A Palestinian family in front of the ruins of their home in Umm al-Hiran, a Palestinian community that the Israeli government is destroying so it can build a town for Israeli Jews only in its place. Residents of Umm al-Hiran are Israeli citizens.)

July 19, 2018 — Today, Israeli lawmakers gave their final approval to the “Basic Law: Israel as the Nation State of the Jewish People” bill that unambiguously defines Israel as a state that belongs exclusively to the “Jewish people.” This is despite the fact that one in five citizens of Israel is an indigenous, non-Jewish Palestinian.

Palestinian members of the Israeli Knesset condemned the law, which enjoys constitutional power, as an “apartheid law.”

Adalah, a leading Palestinian human rights organization in Israel, describes how the law “affirms the principle of apartheid in housing, land and citizenship.” It concludes that “this law constitutionally sanctions institutionalized discrimination.”

As a Palestinian citizen of this state, this bill entrenches my third-class citizenship on the land where generations of my family have lived since long before the state of Israel even existed.

The Jewish-Israeli majority is loudly reminding us indigenous Palestinian citizens of Israel that we are not welcome in our own ancestral homeland. My people have always suffered from legalized racism by the state of Israel and its institutions, but this law makes our apartheid reality the law of the land like never before.

As “non-Jews” we are already not allowed to buy or rent land on 93% of the area controlled by the Israeli state, and many of our communities are declared to be “unrecognized” and bulldozed out of existence by Israeli forces. I received a racially segregated and inferior education in a school system that conspicuously privileges Jewish-Israelis.

Israel is now stripping us of any semblance of equal rights based solely on our ethno-religious identity. It’s even demoting our language from one of the state’s two official languages.

Israel has dozens of racist laws, including some which strikingly fit the UN definition of apartheid. But with the constitutional power of this Basic Law, Israel is effectively declaring itself an apartheid state and dropping its worn-out mask of democracy.

From now on, it will not just be legal to racially discriminate against the indigenous Palestinian citizens of the state. It will be constitutionally mandated and required. This should stir people, institutions and governments to take effective action to hold Israel accountable.

If ever there was a time for boycott, divestment and sanctions against Israel’s system of oppression, it is now. Israel’s official adoption of apartheid opens the door for the Palestinian people, Arab nations and our allies around the world to pressure the UN to activate its anti-apartheid laws and impose serious sanctions on Israel like those imposed on apartheid South Africa.

We shall double our efforts to further grow the BDS movement for Palestinian rights to hold Israel accountable for all its crimes against our people. No Israeli law will erase our right to self-determination in our homeland or the right of our refugees to return home. No Israeli far-right government, with all the blind support it receives from xenophobic and outright fascist forces in the United States and Europe, will ever extinguish our aspiration for freedom, justice and equality.