Skip to main content
In the News
This article is reposted from
Sanya Mansoor, TIME Magazine
, click here to read the original article. 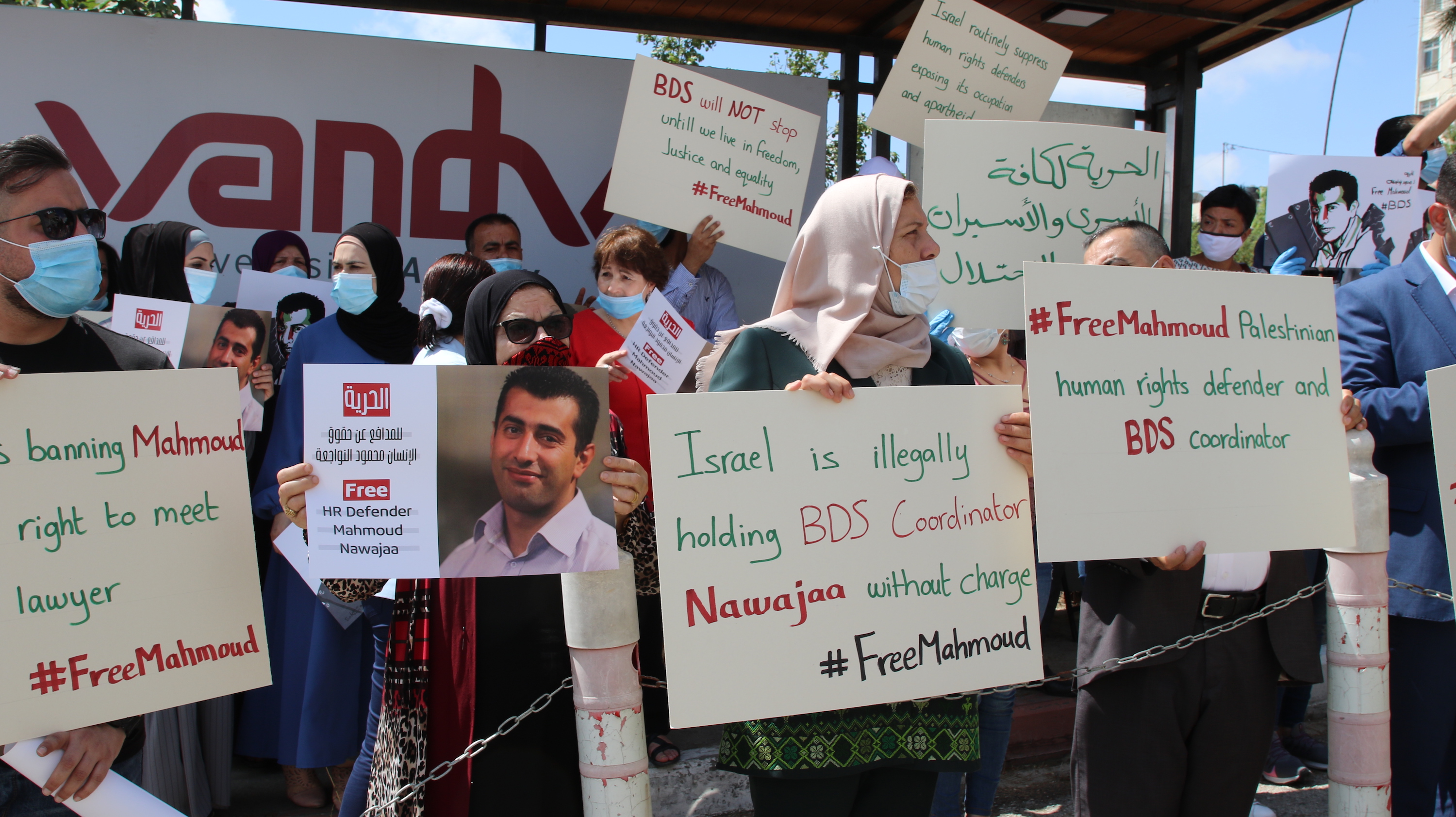 On the same day that Secretary of State Mike Pompeo became the first high-ranking American diplomat to visit an Israeli settlement in the occupied West Bank, he also doubled down on the Trump administration’s opposition to a global pro-Palestinian movement to boycott Israel.

The Boycott, Divestment and Sanctions (BDS) movement relies on putting political and economic pressure on Israel. The goal is to push Israel to recognize the rights of Palestinian citizens currently living in Israel; allow Palestinian refugees, who were driven out of the country as early as 1948 when Israel was created, to return to their homes; and withdraw from all land that it seized after the 1967 Arab-Israeli war, including the the occupied West Bank—which is claimed by the Palestinians.

BDS was formally launched in 2005 by a coalition of about 170 Palestinian grassroots and civil society groups. Fifteen years later, it’s grown in prominence. While it has chalked up only a few economic victories, it has garnered substantial visibility, supporters and also critics internationally, including on the U.S. college campuses, and in state legislatures and Congress.

On Nov. 19, Pompeo promised to cut federal funding for organizations supporting the BDS campaign. “We will immediately take steps to identify organizations that engage in hateful BDS conduct, and withdraw U.S. government support for such groups,” Pompeo said. Israeli Prime Minister Benjamin Netanyahu, who was standing nearby, replied, “It sounds simply wonderful to me.”

Here’s what you need to know about BDS

BDS started in 2005—just one year after the International Court of Justice issued an advisory opinion that “Israel’s building of a barrier in the occupied Palestinian territory is illegal.”

BDS’ strategies are inspired by the South African anti-apartheid movement and although broad, it is coordinated in large part by the Palestinian BDS national committee based in the Palestinian territories. They call for a boycott of “Israeli sporting, cultural and academic institutions” and “Israeli and international companies engaged in violations of Palestinian human rights.” (HP, Puma and Caterpillar are among the targeted organizations.)

The movement also encourages divestment from Israel and sanctions by foreign governments that could include “banning business with illegal Israeli settlements, ending military trade and free-trade agreements, as well as suspending Israel’s membership in international forums such as UN bodies and FIFA,”—the governing body of international soccer.

Boycotts, although a common form of non-violent protest and an effective way to raise awareness around an issue, are often not effective in creating a significant or immediate economic dent or policy change. In the late fifties, the African National Congress in South Africa called for foreign governments to withdraw investments, halt trade and enact a broad boycott South African consumer goods, academia and sports. In the 1790s, English and American abolitionists boycotted sugar produced by slaves. The Arab League—now a collection of close to two-dozen Middle Eastern and African countries— has maintained an economic boycott of Israeli companies and goods since the country’s founding in 1948.

In some ways, BDS continues and was born out of the lack of alternative ways to express Palestinian grievances. “Every other form of Palestinian resistance has been criminalized and made unavailable,” says Noura Erakat, a human rights attorney and assistant professor at Rutgers University. “It’s not that BDS is integral. What do we have besides it?” The fact that the Trump administration has attacked even BDS sends a message “demanding that Palestinians surrender,” she adds.

The BDS national committee says that it does not advocate for any particular solution to the conflict in terms of a “one state” or “two state” solution but that their focus is on Palestinian human rights and regaining control of occupied territories. “Under international law, no political regime, especially a colonial and oppressive one, has any inherent “right to exist,” said Omar Barghouti, human rights defender and co-founder of the BDS movement, in an email to TIME. “No state, whether apartheid South Africa in the past or apartheid Israel today, has a right to be racist or supremacist, privileging part of its population based on identity, and excluding another part, which happens to be the indigenous nation.”

BDS leaders and supporters have vehemently denied that the movement is anti-semitic, saying that they “target the Israeli state” for “serious violations of international law” and do not go after “any individual or group simply because they are Israeli.” When Pompeo conflated BDS with anti-Semitism, Palestinians, as well as national and international civil rights advocates, objected.

“As we have made clear, anti-Zionism is anti-Semitism,” Pompeo said in a Nov. 19 statement. (Zionism refers to the desire to establish a Jewish state—Israel—and the belief that Jews collectively make up a nationality and not only a religion.)

The Palestinian BDS national committee responded in a statement, saying that “the fanatic Trump-Netanyahu alliance is intentionally conflating opposition to Israel’s regime of occupation, colonization and apartheid against Palestinians and calls for nonviolent pressure to end this regime on the one hand with anti-Jewish racism on the other, in order to suppress advocacy of Palestinian rights under international law.” The committee stressed its opposition to “all forms of racism, including anti-Jewish racism.

“If you say anti-Zionism is anti-Semitism then you’re basically condemning all Palestinians as anti-Semites because they decide to exist,” Erakat says. The reason that BDS has been met with fierce opposition is because it “morally challenges Zionism as a political project,” she adds.

Amnesty International, Human Rights Watch and the ACLU all decried the implications for free speech and dangers of conflating BDS with antisemitism. “Advocating for boycotts, divestment and sanctions is a form of non-violent advocacy and of free expression that must be protected,” said Bob Goodfellow, the Interim Executive Director of Amnesty International USA, in a statement. “The US administration is following Israeli government’s approach in using false and politically motivated accusations of antisemitism to harm peaceful activists.” Human Rights Watch accused Pompeo of “falsely equat(ing) peaceful support for boycotts of Israel with antisemitism.” The ACLU stressed that “threatening to block government funds to groups that criticize Israel is blatantly unconstitutional.”

Jews and Jewish groups are not united on the issue about whether BDS is anti-semitic. While many conservative Jewish groups criticize BDS for unfairly singling out Israel and worry that it’s ultimate aim is to delegitimize any notion of a Jewish state, dozens of progressive Jewish groups have taken issue with the characterization of BDS as anti-Semitic, fearing that doing so overshadows “legitimate critiques of Israeli policies.”

The American Israel Public Affairs Committee (AIPAC)— a powerful pro-Israel lobbying group in the U.S.—characterizes BDS as “anti-Israel discrimination because it “targets Israel’s right to exist,” “singles out the Jewish state” and “aims to cut off Israel from the rest of the world.”

Rabbi David Wolpe, a rabbi at Sinai Temple in Los Angeles, says he does not doubt there are BDS supporters who have “perfectly good intentions” but worries that the degree of condemnation faced by Israel is “wildly disproportionate to any presumed sins that Israel has committed.” He believes that “many expressions of the BDS movement are anti-Semitic” and takes issue with anti-Zionism, too. “To say you’re anti-Zionist is to say we oppose the only Jewish country ever in history (…) and to say it has nothing to do with anti-semitism is strange credulity,” Wolpe says.

However, some Jewish groups consider themselves to be “proudly” anti-Zionist and in support of BDS. Stifling BDS is “not about Jewish safety,” says Stefanie Fox, executive director of Jewish Voice For Peace. “An opposition to Zionism is about an opposition to a specific government that has nothing to do with Judaism,” Fox says. As for Pompeo’s characterization, she says, “We won’t let white supremacists dictate what is and not anti-semitism.”

Almost one quarter of American Jews under 40 support the boycott of products made in Israel, according to a National Jewish Survey of 8000 Jewish voters in the 2020 election from J Street, a “pro-Israel, pro-peace” group that identifies as progressive—they oppose Israeli occupation but are also against the global BDS movement.

Less than one-third of American respondents of a Washington Report on Middle Eastern affairs poll from May 2020 say they align with the Trump Administration’s insistence that “anti-Zionism is anti-Semitism.”

What effect has BDS had?

The broader economic impact of the boycotts has been largely negligible for Israel as the country’s economy continues to thrive, although BDS movement leaders say its pressure on a handful of companies—including international phone company Orange and French construction company Veolia—contributed to their decision to pull out of Israel.

On its website, the BDS movement has detailed instructions on how to participate in academic, cultural and economic boycotts, as well as ways to join campaigns against targeted companies. They circulate petitions and social media materials as well as “ideas for action.”

The relatively limited scope of the economic impact of BDS hasn’t stopped a powerful pro-Israel lobby in the U.S. from trying to squash the movement. The fight over BDS has played out in Congress, state legislatures and college campuses across the U.S. for years.

A May 2019 investigation from the Center for Public Integrity found that 27 states in the span of four years enacted policies, “adopted with virtually identical language,” to restrain the BDS effort. In 2017, governors of all 50 US states as well as the mayor of DC said that the “goals of the BDS movement are antithetical to our values” by isolating Israel in a newspaper ad organized by AJC, a global Jewish advocacy organization.

Student bodies at a few dozen U.S. colleges have voted to divest from or boycott companies that profit from Israeli occupation and human rights violations, according to the National Students for Justice in Palestine, whose chapters have been advocating for BDS.

The BDS movement has led to bad publicity for Israel in the form of disrupting high-profile public events. For example, singer Lorde canceled her concert in Tel Aviv, which was scheduled to take place in 2018 after Trump’s decision to recognize Jerusalem as the capital of Israel, after activists called for her to support BDS. Many influential progressive voices, including Angela Davis and Archbishop Desmond Tutu, are BDS supporters. Some large churches in the US have backed the effort too.

In July 2019, the US House of Representatives overwhelmingly passed a resolution opposing the global BDS movement. In response, Reps. Ilhan Omar and Rashida Tlaib co-sponsored a resolution affirming the right for Americans to “participate in boycotts in pursuit of civil and human rights at home and abroad.” After Tlaib and Omar—both of whom have been outspoken on Palestinian human rights and fierce critics of Israel—voiced their support for BDS, Israel banned them from entering the country. (Israel later said they would allow Tlaib to visit her aging grandmother in the West Bank as a private citizen but she refused, saying “visiting my grandmother under these oppressive conditions meant to humiliate me would break my grandmother’s heart.”)

Tlaib tweeted last month that she hoped a future Biden administration would “change course from Trump’s State Department” suppression of BDS. President-elect Joe Biden’s stance on BDS is less clear and he did not respond to a request to clarify his position from TIME. (Biden spokesperson Andrew Bates previously said that “Biden opposes BDS, as does the Democratic platform”)

The original version of this story misstated the history of the boycott. Many countries in the Arab League have maintained an economic boycott of Israeli companies and goods since the country’s founding in 1948.