Skip to main content
In the News
This article is reposted from
European Public Service Union
, click here to read the original article.

June 6, 2019
/ By
European Public Service Union
/
Europe, European Union
The European Federation of Public Services Unions, representing 8 million workers, passed a resolution calling for the suspension of the EU-Israel association agreement because of the repeated breach of its human rights provisions. 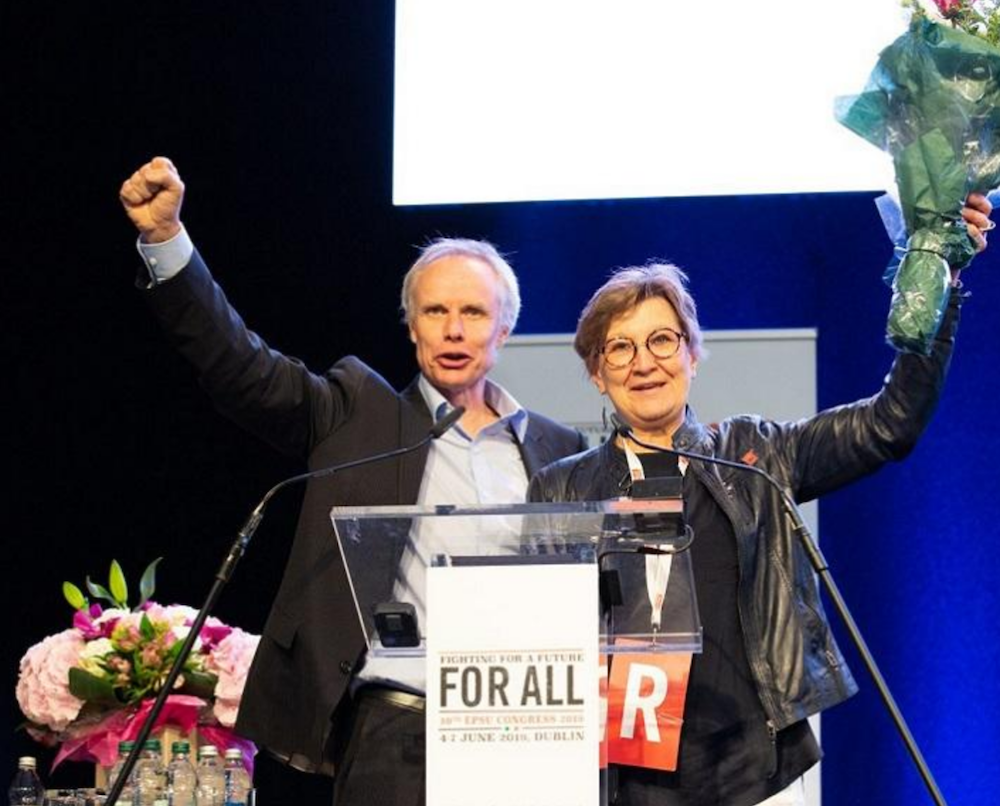 (6 June 2019) Public Services unions from across Europe, gathered together in Dublin, have vowed to redouble their efforts to fight for gender equality, solidarity with refugees and good jobs for all.

The delegates elected Mette Nord as the federation’s President and re-elected Jan Willem Goudriaan as General Secretary, with 98% and 96% of the vote, respectively.

At the major conference of over 600 participants, delegates heard contributions from trade unionists from around the continent who shared their experiences of struggles for better pay and conditions. But a key point, repeatedly emphasised, was that public services improve when workers get a fair deal.

Cuts have hit services across Europe in the last ten years. Austerity has disproportionately affects women, both because they use more public services and tend to occupy the lower-paid roles involved in their delivery.

The attack on rights in Europe has been widespread and has hit no one more than migrants and refugees. Congress reaffirmed its solidarity with those fleeing persecution and heard from members who work with migrants. These EPSU affiliates have formed a pan-European network of workers who provide services to new arrivals. Together with migrants’ organisations, they are fighting for more humane services and the quality jobs needed to deliver them.

A more controversial issue was a resolution on Israel-Palestine. Despite diverging opinions, delegates engaged in a respectful and impassioned debate about the conflict and the role of public services in building peace. The resolution passed and called for the suspension of the EU-Israel association agreement because of the repeated breach of its human rights provisions.

The energy and healthcare sectors, not as controversial but no less important, were also discussed. EPSU is fully committed to the fight against climate change, starting with the decarbonisation of electricity generation. But a new power system for Europe needs real investment in both infrastructure and people. The sector needs to be attractive to skilled young people and that starts by paying competitive wages and providing good conditions.

In health, the warnings over the privatisation of services and increasing monetisation of care came through loud and clear. Services are under pressure and patients suffer, most of all in elderly care, where multinationals are increasingly taking over facilities and squeezing workers for their profits.

The solution to this challenge, as with others, is to organise. Organising has been a priority for EPSU and its affiliates for the last five years . Trade union power is built on our strength of numbers, but also the strength of our commitment. Without these two things we cannot fight, negotiate and bargain as workers. Over the next five years, EPSU will continue to work to grow our strength and deepen our resolve.