Colonial hypocrisy is killing Palestinians. On the 74th anniversary of the Nakba, we condemn once again the Western indifference to Palestinians, which enables Israel's impunity, directly contributing to our ongoing Nakba. We reiterate our call for meaningful solidarity with Palestinians facing ethnic cleansing, massacres, colonial dispossession and apartheid. 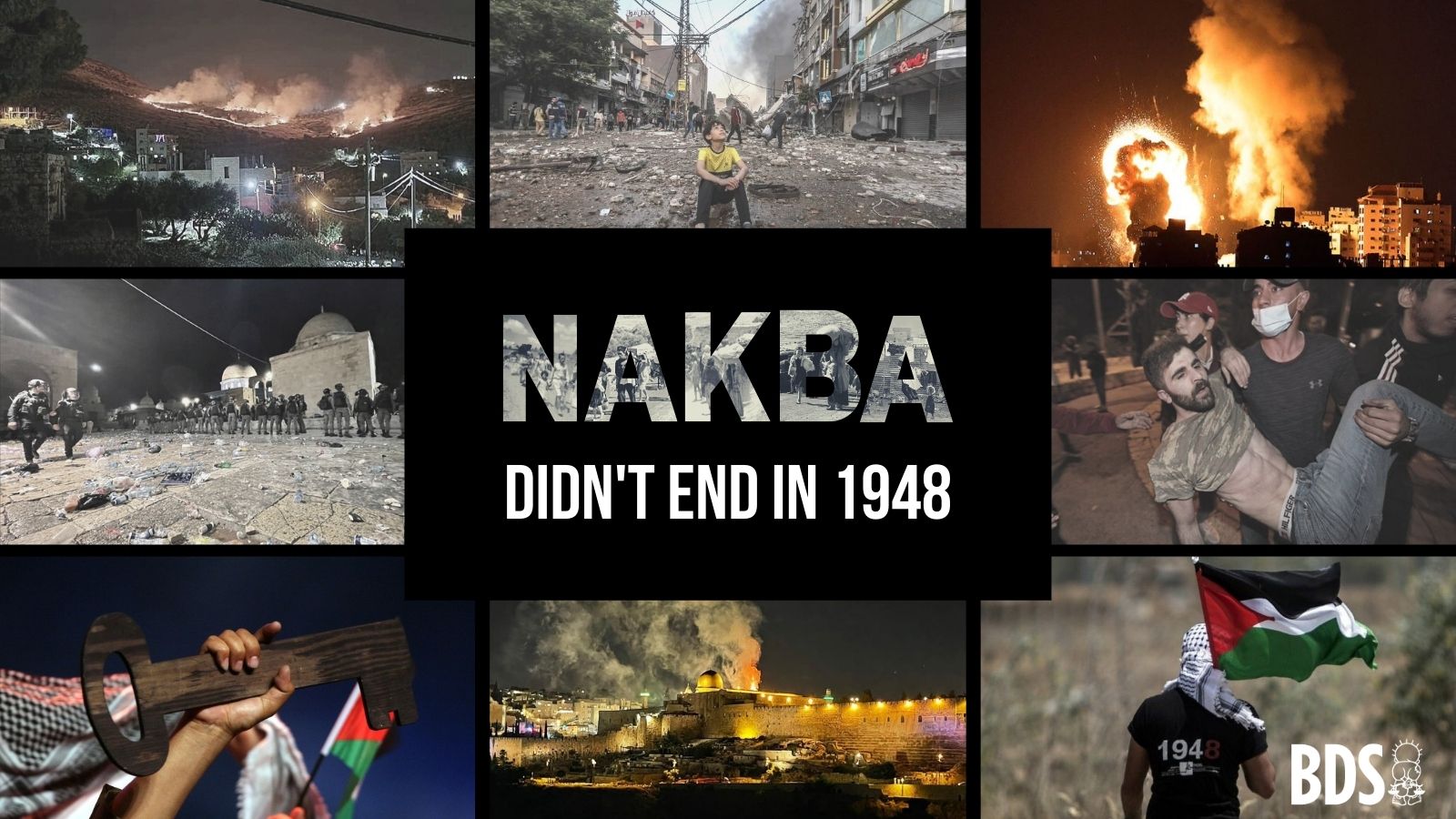 Last May, activists around the world stood with us as we faced yet another massacre in besieged Gaza, resisted ethnic cleansing in Jerusalem and the Jordan Valley, and stood in unity against Israeli settler-colonial and apartheid attacks in our cities in historic Palestine. Yet, Western governments offered only condemnation at best, and at worst - complete inaction.

Apartheid Israel’s colonial violence and naked aggression have never stopped. But neither has Palestinian resilience and sumud (steadfastness).  In Sheikh Jarrah, Silwan, Al-Naqab and Masafer Yatta and across historic Palestine, Palestinians stand united against ongoing ethnic cleansing. In scenes eerily similar to last May, Palestinians are once again facing and resisting apartheid Israel’s violent aggression and desecration of our holy sites. Israel’s brutality towards Palestinians has been ongoing for over 74 years, yet, during the month of Ramadan Israel escalated its violent suppression of our rights in our occupied city of Jerusalem and beyond.

During April, apartheid Israel murdered at least 23 Palestinians, including 3 women and 2 children; violently suppressed demonstrations; desecrated the Al-Aqsa Mosque and assaulted Palestinians as they worshipped. It also embarked on a campaign of mass arrest, including the arrest of more than 500 Palestinians in and around the Al-Aqsa compound, and once again it bombed the Palestinian population of besieged Gaza.

Palestinians watch with empathy the suffering of Ukrainians. Yet, the West’s blanket boycotts and sanctions against Russia while continuing its complicity in and unconditional support for Israel’s apartheid, military occupation and settler-colonialism against Palestinians is racist, enraging and hypocritical. Ironically, these sanctions and boycotts demolish anti-BDS excuses by Israel and anti-Palestinian apologists. Suddenly, culture, academia, business and sports are not "above politics."

We see in the West’s warm reception of Ukraine’s white refugees an example for how all refugees escaping the ravages of war, economic devastation, or climate injustice should be treated by the West, particularly when these calamities are primarily caused by Western imperialism. This warmth, however, stands in sharp contrast to how these same countries have treated Brown and Black refugees arriving at their shores and borders, with racism, walls, “push-backs,” forced family separations, even drownings – the same bigotry that non-white refugees from Ukraine have experienced.

This Western double standard is condemned by peoples across the Global South, including for Palestinians, and by progressives in the West. After all, Israel’s decades-old regime of oppression is not only “Made in the West,” but is still armed, funded and shielded from accountability by that same deeply colonial and racist West, in particular the US, UK and EU.

As we mark the 74th anniversary of the Nakba we remind the world of the growing global consensus that Israel is committing the crime of apartheid against all Palestinians. We reiterate our call on governments to impose lawful, proportional and targeted sanctions on Israel, for the UN to launch an investigation into Israeli apartheid, and for the escalation of all BDS campaigns globally in order to isolate Israel as an apartheid regime and attain freedom, justice and equality for Palestinians.

Channel your anger strategically and mobilize to #DismantleApartheid and all forms of racism and oppression. Take these five actions now to end international complicity of states, institutions and corporations in maintaining Israeli apartheid:

1. Work with progressive networks to pressure parliament and government to

(a) end all military-security cooperation and trade (military funding in the US case) with apartheid Israel and similarly criminal regimes of oppression worldwide,

(b) ban all goods/services of companies operating in Israel’s illegal colonial settlements;

c) stop material support for and purchases of pillaged and disputed Israeli natural gas; and,

(d) demand a UN investigation of Israeli apartheid and the reactivation of UN mechanisms to fight apartheid.

2. Mobilize pressure in your community, cultural center, trade union, church, student government/union, city council, or other organization to declare it an Apartheid Free Zone (AFZ), ending all relations with apartheid Israel and companies that are complicit in its system of oppression.

4. Cancel all academic, cultural, sports, and tourism engagements in Israel or supported/sponsored by Israel (or its lobby groups and complicit institutions).

5. Join a BDS campaign or a strategic Palestine solidarity group near you to act collectively and effectively.