Skip to main content
In the News
This article is reposted from
Ireland-Palestine Solidarity Campaign (IPSC)
, click here to read the original article.

In a stand for Palestinian rights, music legends, former Eurovision winner, commentator and presenters, performaning arts trade unions and well known LGBTQ+ and feminist campaigners and others endorse the call for Ireland to boycott Eurovision 2019. 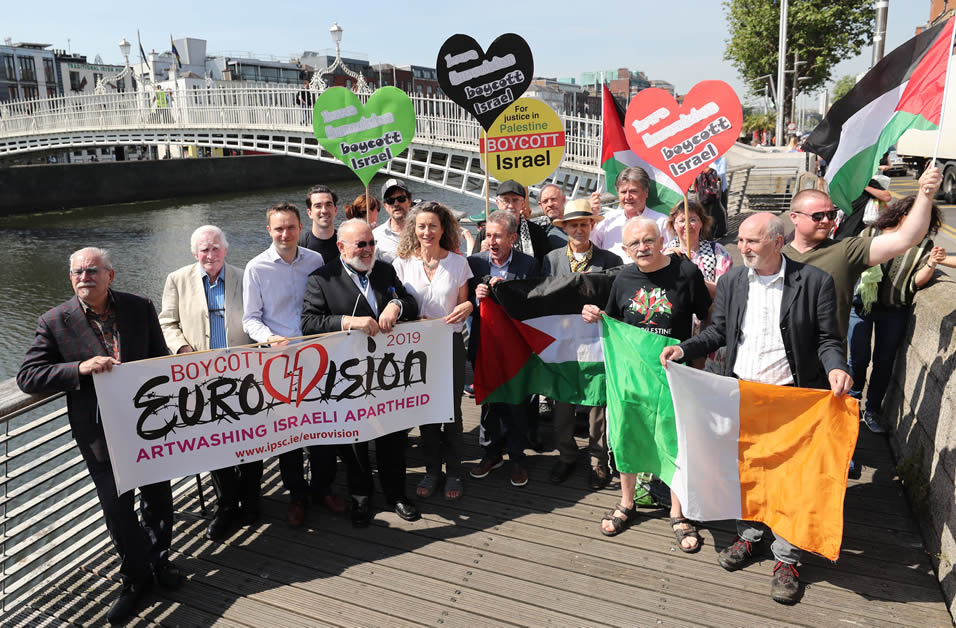 The launch came just as news broke that the Israeli government announced that it had dropped its condition that the Eurovision must take place in Jerusalem, a first victory for the campaign seeking its total removal from the state. As the BDS Movement in Palestine has noted, this move “marks a striking failure in Israel’s PR efforts to assert its illegal claim over Jerusalem in the face of growing boycott calls.”

The Irish campaign is made up of human rights activists, artists and other public figures who believe that Israel’s hosting of the Eurovision will be used to culturally whitewash and ‘pinkwash’ Israel’s atrocious record of seven decades of war crimes and human rights abuses against the Palestinian people. The campaign has been initiated by the Ireland-Palestine Solidarity Campaign (IPSC), PalFest Ireland and Trade Union Friends of Palestine (TUFP), in response to calls from Palestinian artists, journalists and civil society groups.

Further support for the campaign comes from Seamus Doyle and Eamon Murray, President and Vice-President respectively of the Musicians Union of Ireland (MUI), the trade union for musicians, singers and music professionals , and actor Padraig Murray, President of Irish Equity, the trade union for actors, dancers, directors, and stage and set builders/designers. Both unions, the MUI and Irish Equity, have also endorsed the campaign.

Speaking at the launch. renowned Irish artist and Riverdance set designer, Robert Ballagh said: “When Nelson Mandela visited Dublin soon after his release from prison in Robben Island, I asked him what role the international boycott of South Africa played in the ending of apartheid there. Mandela told me that ‘the boycott was one of the most important weapons in the struggle against apartheid.’ As it was then, so it remains today. This is why I fully support this call for an Irish boycott of the Eurovision 2019 in Israel. We must show the same solidarity to Palestinians living under Israeli apartheid as we did to black people under South African apartheid.”

Actor and former Eurovision presenter (1997), Carrie Crowley said: “For all sorts of cultural and historic reasons we identify deeply with the Palestinians. Their treatment – or mistreatment – at the hands of the State of Israel is horrendous. If by boycotting a significant global television event we can draw attention to this injustice, it might help start changing the attitude and the damage being done on a daily basis. I believe many Irish people feel the same way.”

Co-founder and former chair of the Irish Anti-Apartheid Movement, Gearoid Kilgallen said: “There will be people who will say that cultural events like Eurovision should not be politicised. Of course, these were arguments we faced regarding South Africa when I was involved with the Irish Anti-Apartheid Movement. Now, as then, I firmly believe that all legal means must be employed in fighting discrimination and occupation, including the boycotting of sporting and cultural events. Such boycotts were hugely effective in the South African situation, and it is clear that there are strong parallels to be drawn between the apartheid South African state and the apartheid Israeli state.”

Although unable to make the launch, Irish broadcasting legend and former Eurovision commentator (1972-77, 1979, 1988), Mike Murphy sent his support saying: “When I visited Palestine last year I was utterly appalled by the treatment being meted out to the Palestinian people by the Israeli state. I visited South Africa during the apartheid era and I believe that Israel’s policies of deprivation, discrimination and humiliation are as bad, if not worse, than those perpetrated upon black South Africans. It is frustrating, for those of us who would like to be of some use, to see that it seems impossible to get the ears of governments, and the lamentable UN, to enact some practical expression of support for the forgotten people of Palestine. This is why I think we in Ireland need to stand up and be counted and say, ‘We’re not competing in the Eurovision in Israel’. It’s a small gesture, but it’s what Palestinians themselves are asking of us. It’s the very least we can do to support them.”