Illegal Israeli settlements should not be promoted as a form of sustainable architecture.


Illegal Israeli settlements should not be promoted as a form of sustainable architecture.

The Palestinian Boycott, Divestment and Sanctions National Committee (BNC), which is drawn fromthe major Palestinian political and social force is deeply concerned about your selection of Ariel'University’s' Centre of Samaria (hereafter referred to as AUCS) as aparticipant in the Solar Decathlon, organized by the Spanish Ministry of Housing and the Universidad Politécnica deMadrid, and taking place in Madrid in June 2010. Extending an invitation to AUCS is a form of complicity in breaching international law through offering concrete support and legitimation to an illegal Israeli settlement built onoccupied Palestinian territory.

The Palestinian BDS campaign has called for the academic boycott of Israeli academic institutions until Israel fully complies with its obligations under international law.[1] Israeli academic institutions have “either contributed directly to maintaining, defending or otherwise justifying … [Israeli colonial] oppression, or have been complicit in them through their silence."[2] AUCS is especially complicit as it is itself a colony built on occupied Palestinian territory, violating the Fourth Geneva Convention which regards such colonization as “war crimes.” The International Court of Justice (ICJ) in July 2004 also ruled in its advisory opinion on Israel’s Wall that all such settlements are illegal.

Founded as a regional branch of Bar-Ilan University, AUCS is located in the Ariel settlement which,together with its industrial zone Barkan, is the second largest Israeli colony in the West Bank, just after the occupied East Jerusalem settlement block. It is located 22 km away from the “Green Line,” cutting deep into the Palestinian Governorate of Salfit and grabbing more than  22% of its land: 10% is used to house 17,000 settlers, and 12% is used for military training purposes[3]. 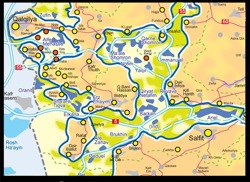 Israel’s illegal apartheid Wall divides thegovernorate into separate Bantustans in order to facilitate the annexation of the Ariel settlement block to Israel. The colony destroys the livelihoods and water sources of Palestinian farming communities as prime agricultural lands are buried under its cement or polluted by its waste.

The Fourth Geneva Convention states that "the transfer by the occupying power of parts of its own civilian population into the territory it occupies" is a war crime.[4]  Also, U.N. Security Council Resolution 465 confirms the illegality of Israeli settlements and calls on “all states not to provide Israel with any assistance to be used specifically in connection with settlements in the occupied territories.”[5]

The most recent European Council meeting in Brussels, held on June 15th, 2009, has once again reiterated the illegality of Israeli settlements and has defined them as "obstacles for peace."[6] Spain, represented by its Minister of Foreign Affairs, Miguel Angel Moratinos, has explicitly adopted this European position on Israeli settlements, which lends further support to why Spain should not engage in any cooperation with AUCS.

The Israeli project, called ‘the stretch house’ is in fact the ultimate model of Zionist expansion and colonialism. Fayeq Kishawi, coordinator of the popular committees against the Wall and the settlements in Salfit district, comments: “The Israeli project represents the Israeli claim to expand control over our land and resources and to expel us, occupy us and destroy our livelihoods at their own whim and desire. It is a recipe for how to steal more and more land. As somebody living in Salfit and suffering like the others from Ariel’s continuous ‘stretching’ I wonder how the Solar Decathlon can accept a project submitted by an institution that has stolen our land and will build its project on our stolen land.”

Abe Hayeem, director of Architects and Planners for Justice in Palestine, has referred to the irony of the name Ariel's chosefor its project at the Solar Decathlon, "the stretch house;” illegal settlements, like Ariel, have been built by 'stretching' and distorting international law to justify their construction. Hayeem believes that “Ariel’s entry boasts of proposing a different alternative at a time of growing awareness for sustainability and ‘green’ architecture" in blatant disregard for international law.

The inclusion of “the stretch house” into the “Solar Villa” undermines international law and offers concrete support for and complicity with Israeli war crimes. We ask that you reconsider your invitation to the illegal settlement institution to display its model illegal expansion rebranded as one of ‘sustainability.’

The International Union of Architects (UIA) has charged that Israel’s architecture and planning in the occupied West Bank are contrary to its professional ethics and Codes of Conduct and Accords. Architects, planners and academics around the world have signed petitions against the illegal settlements.

Thus, inviting AUCS to participate in the Solar Decathlon is not only a breach of international law, but also lends validity tothe illegal settlement through promoting its model of ‘illegal sustainability’ in house building.

In compliance with international law, and in the spirit of international solidarity and moral consistency, we ask the organisers of the Solar Decathlon Madrid 2010 competition for sustainable architecture to cancel the participation of AUCS. We ask that you recognize that the ‘stretch house’ is not a sustainable housing development, but rather a model that actively breaches international law. We sincerely hope that Madrid’s Solar Villa will not include a model promoting the Israeli occupation and apartheid.

Endorsed by Architects and Planers for Justice in Palestine (APJP)

[1] This includes ending the occupation, facilitating the right of Palestinian refugees to return and ensuring equal rights for all Palestinian citizens of Israel. For more information please see the Palestinian BDS call: http://www.bdsmovement.net/?q=node/52

[4] Rome Statute of the Geneva Convention, Art. 8 (2) (b) (VIII)- and as a source of International Humanitarian Law Art. 85(4) (a) as quoted by the International Red Crescent Committee: http://www.icrc.org

[5] “All measures taken by Israel to change the physical character, demographic composition, institutional structure or status of the Palestinian and other Arab territories occupied since 1967, including Jerusalem, or any part thereof, have no legal validity and that Israel’s policy and practices of settling parts of itspopulation and new immigrants in those territories constitute a flagrant violation of the Fourth Geneva Convention relative to the Protection of Civilian Persons in Time of War and also constitute a serious obstruction to achieving a comprehensive, just and lasting peace in the Middle East.”
See: http://domino.un.org/UNISPAL.NSF/db942872b9eae454852560f6005a76fb/5aa254a1c8f8b1cb852560e50075d7d5

[6] Conclusions on theMiddle East Peace Process, adopted by the Council on 15 June 2009