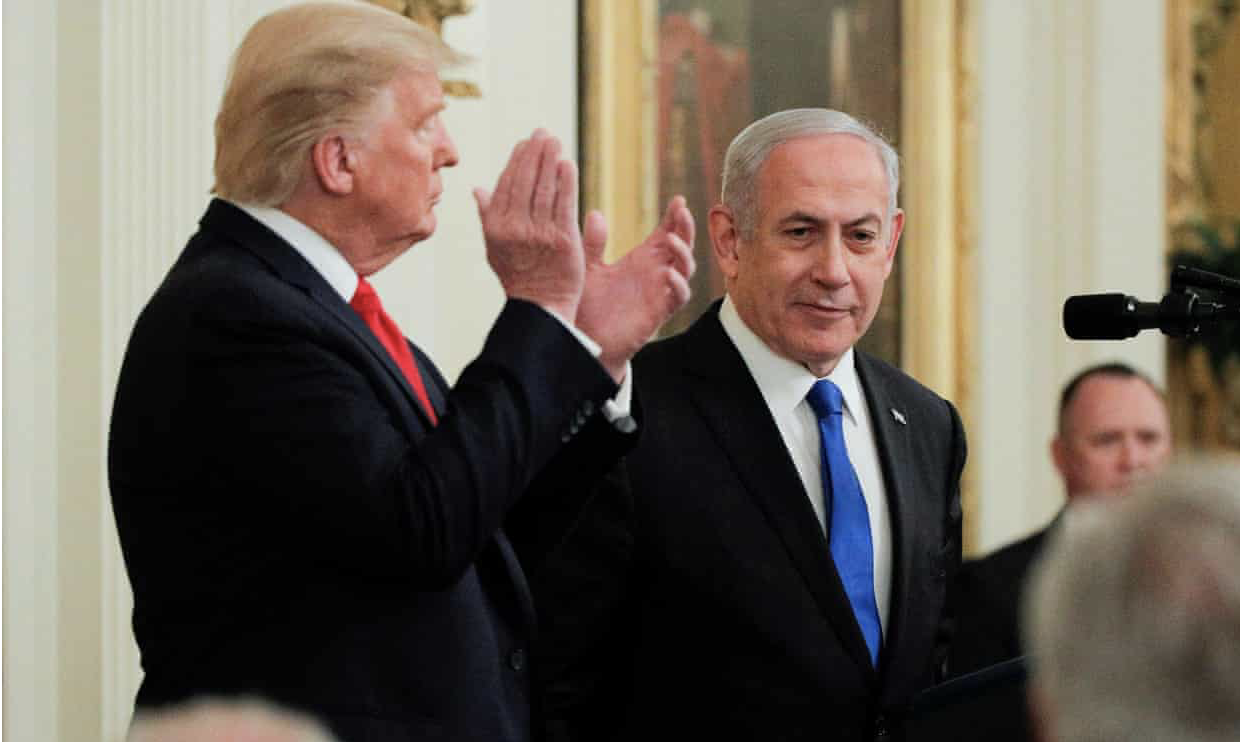 Nearly 130 parliamentarians, including former Conservative cabinet ministers, have written to Boris Johnson urging him to impose economic sanctions against Israel if Benjamin Netanyahu’s new coalition government goes ahead with its threat to annex parts of the West Bank.

The signatories, which also include diplomats and prominent campaigners against antisemitism in the Labour party such as Margaret Hodge, point out that the UK did not hesitate to sanction Russia after the annexation of Crimea, claiming any move in the West Bank would warrant a similar response.

Netanyahu has negotiated a right to annex parts of the West Bank from 1 July in the coalition deal he signed with Benny Gantz’s Kahol Lavan party, but he is thought to be waiting for approval from the Trump administration before deciding his next move. Trump wants annexation to be seen to be integrated into the peace plan set out by his son-in-law, Jared Kushner, last year.

Britain joined a diplomatic démarche by 10 EU diplomats in a Zoom call this week warning the Israeli foreign ministry against annexation, but the imposition of sanctions as opposed to condemnation would be unprecedented.

In the letter, organised by the Council for Arab British Understanding (Caabu), the signatories express outrage at the new Israeli government’s declared plan to annex areas of territories it occupied in June 1967, describing the move “as a mortal blow to the chances of peace between Israelis and Palestinians based on any viable two-state solution”.

They claim it is clear the Israeli government is using “the cover of the Covid-19 pandemic to seek to implement this egregious plan. It is vital that the UK does everything in its power to prevent this.”

They argue “international law is crystal clear. The acquisition of territory through war is prohibited. The Russian annexation of Crimea in 2014 is a recent example where Britain quite properly opposed such acts with appropriate measures, including robust sanctions.

“Our government has stated that any annexation ‘cannot go unchallenged. The government must now make clear publicly to Israel that any annexation will have severe consequences including sanctions. Words are not enough: Prime Minister Netanyahu has ignored our words. We need to prevent his government from setting this alarmingly dangerous precedent in international relations.”

In a joint statement in September last year by the UK government, together with France, Germany, Italy and Spain, the UK warned any unilateral annexation of any part of the West Bank would be “a serious breach of international law”.

David Jones, the chair of Caabu, said he regretfully thought Netanyahu would only listen to threats. Crispin Blunt, one of the signatories and the former chair of the foreign affairs select committee, said the issue was a massive test for the UK that he hoped his country would pass. He said he hoped Britain would take a stand by saying international law does stand for something, and bullying does not pay.

Two Labour frontbenchers, Stephen Kinnock and Seema Malhotra, have signed the letter in a personal capacity, while the shadow foreign secretary, Lisa Nandy, has already written to the foreign secretary, Dominic Raab, asking him to oppose annexation.

sanctions
impact
Annexation
May 1, 2020
/ By
The Guardian
/
United Kingdom