Skip to main content
In the News
This article is reposted from
Yaniv Cogan
, click here to read the original article. 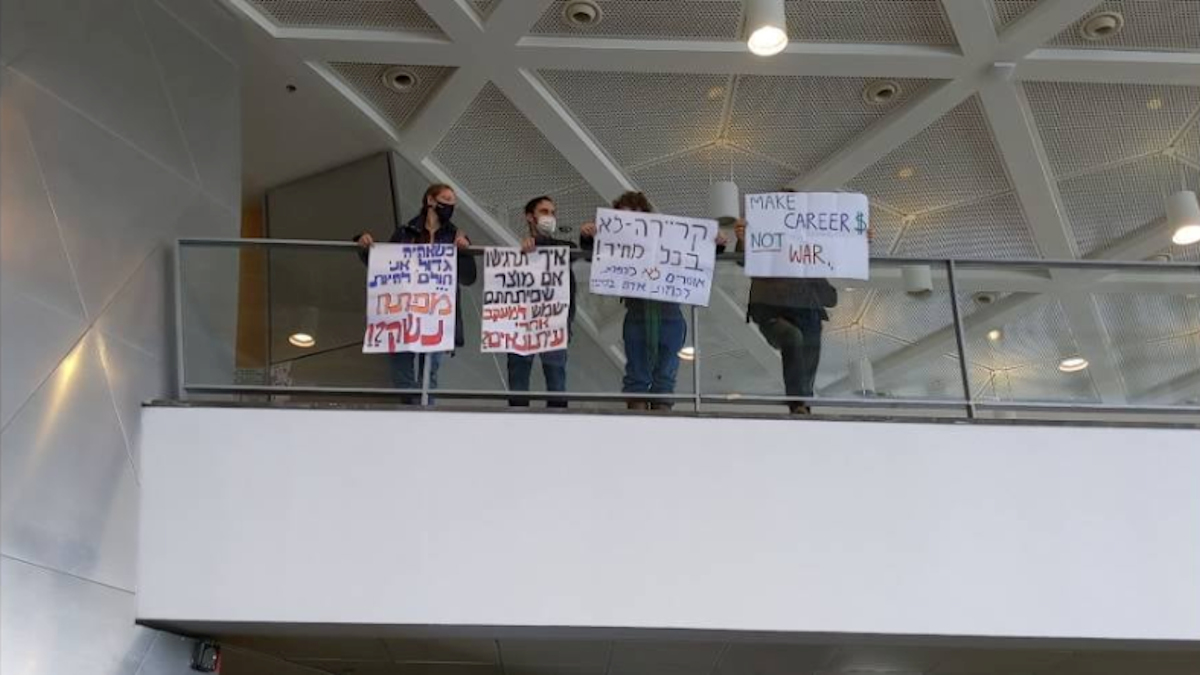 A few months ago, the Technology Employment Fair took place at Tel Aviv University. It’s an annual event in which various high-tech companies are invited to set up stands on campus and try to convince students that working for them is a first step towards a successful career. Alongside giant corporations such as Apple, Cisco, Amazon and Samsung, the university has also invited [Israeli] arms companies Rafael, IAI, Bet Shemesh Engines, the Negev Nuclear Research Center and Elbit Systems, as well as the Israeli intelligence organizations: the Shin Bet and the Mossad.

Each of the stalls was loaded with snacks and branded memorabilia, which the companies distributed in exchange for a few minutes of time from the students, during which company representatives promised a high wage, challenging and satisfying projects and opportunities for advancement within the organization’s hierarchy. The representatives were less eager to discuss the products that their companies develop.

Representatives of IAI, who staffed a stall of sugared popcorn, did not mention that drones produced by the company conducted targeted and precise attacks against civilians in Gaza, or served the European Union in locating and blocking refugees. The company’s warm welcome to Min Aung Hlaing, the general who took over Myanmar in a military coup last year, as he visited Israel, was not mentioned. Following the visit, IAI and the U.S. sold attack boats to Hlaing, despite an arms embargo imposed by the European Union due to reliable reports on the atrocities conducted by the army under Hlaing’s command against the Rohingya minority.

Four months before Hlaing’s visit, the U.S. Holocaust Memorial Museum warned that Myanmar is close to committing genocide against the Rohingya. In 2017, two months before the deal for the sale of the attack boats was signed, a UN delegation declared that the Myanmar armed forces operated a “calculated terror campaign” with the purpose of cleansing the state of the Rohingya minority.

In the stall of Elbit Systems one could receive a branded thermos and coffee, but not learn that Elbit Systems is responsible for deploying surveillance equipment along the Separation Wall, which was erected in order to annex parts of the West Bank to Israel, and to enable the cleansing of these areas of Palestinian residents.

Israel’s wars are also fueled by weapons produced by the company. The IDF relies on Elbit Systems to produce more lethal weapons than external suppliers. According to media reports, Elbit Systems has undertaken the production of artillery cannons for the IDF instead of the German KMW. Although KMW won the tender, the army chose Elbit Systems due to concerns that Germany would forbid its cannons from being used to fire cluster bombs, following the bombing of the villages of southern Lebanon in 2006, which a commander in an artillery unit later described as “insane and monstrous.”

Ties between Tel Aviv University and Elbit Systems go beyond an annual invitation to the Technology Employment Fair. Since 2018, the university has invited students from the departments of exact sciences and engineering to over fifteen different events organized by Elbit Systems for the purpose of recruiting employees. Among the events were a Hanukkah party, Women’s Day, and a technology challenge inspired by Alice in Wonderland.

In addition to these events, the university and Elbit Systems have operated the InnoBit program over the past five years. For students, InnoBit is a course in engineering which counts as a final project and grants academic credits. For Elbit Systems, it is a tool for recruiting employees and subsidizing technological developments. All of the program participants are required to sign a non-disclosure agreement with Elbit Systems, and commit in advance to give an “exclusive, worldwide license without payment to Elbit Systems to use the intellectual property [developed within the project] without any limitations in Elbit System’s areas of operation which are: military, paramilitary and homeland security.”

This is not the only way by which Elbit Systems exploits research advances from academia to generate profits. In 2019, after the Tel Aviv University engineering department demonstrated tools that it developed at the AUS&R [Autonomous Unmanned Systems and Robotics] arms expo, cooperation between the university and Elbit Systems began in the field of autonomous drone navigation. The senior staff of the university also support the company. The university organized several meetings between senior executives of Elbit Systems and professors in order to expose Elbit Systems to “new groundbreaking innovations” in the fields of cyber and aircraft propulsion, to “facilitate the transfer of technology from a research institution to an industrial corporation for developing groundbreaking products.”

Forensic investigation revealed that cyber tools produced by Elbit Systems and sold to Ethiopia were used to spy on opposition members, and extensive documentation exists of the use of Elbit’s aircraft against civilians – such as in the case of the murder of four [Palestinian] children on the beach of Gaza during the 2014 Israeli attack on the Gaza Strip (operation “Protective Edge”). It is very possible that these crimes, and the crimes for which Elbit Systems will be responsible in the future, have been made possible due to the support of Tel Aviv University.

Apart from the warm relationship between arms companies and the university, the latter plays an important role in shaping Israel’s security doctrine. The IDF’s ethical code was developed and maintained in cooperation with professor emeritus Asa Kasher, former Chair of Professional Ethics and Philosophy of Practice. Kasher provided a complex academic analysis, according to which the amount of harm to the civilian population during Operation Accountability (1993) was “legitimate and in the precise dosage.” Over 90% of the casualties in the operation were civilians that the IDF attacked with the stated purpose of terrorizing the population in southern Lebanon, in order to induce a flow of refugees towards Beirut.

The Institute of National Security Studies (INSS), which is attached to Tel Aviv University, wields significant influence on Israeli security policy as well. The institute hires retired IDF officers and maintains close ties with politicians and generals. Following the Second Lebanon War, the institute promoted the principles of the “Dahiya Doctrine” (named after the Shiite quarter in south Beirut), which have guided the Gaza operations since 2008. In an article published by the former head of the National Security Council Giora Eiland on behalf of the INSS, he explained that the IDF has to win wars by “destroying houses and infrastructure and causing suffering for hundreds of thousands.”

Another contribution of academia to the occupation mechanisms is more direct: training soldiers to perform complex missions that require professional knowledge by means of the academic reserve programs. The academic reserve in the law department trains lawyers for the Military Advocate General, which engages in whitewashing [Israel’s] war crimes and avoiding international monitoring mechanisms. One of the graduates of the academic reserve program at Tel Aviv University is professor Gabriella Blum, who laid the groundwork for a legal authorization of extra-judicial killings as part of her work at the Military Advocate General. Blum determined that every Palestinian identified as an operative in an armed organization “is a legitimate target, and can be shot in the back while he’s sleeping.”

Israeli academia in general, and Tel Aviv University specifically, are thus participants in Israel’s mechanisms of occupation and war at every level: shaping the military doctrine and the ethical code that permit the intentional targeting of civilians, developing the technology that allows the execution of this doctrine as precisely as possible, and finally – providing legal defense against accusations of war crimes.

This article was originally published in the “Kol Hastudentim” and “Zo Haderech” magazines in Hebrew in April 2022. It is translated by Shir Hever with the author’s permission.