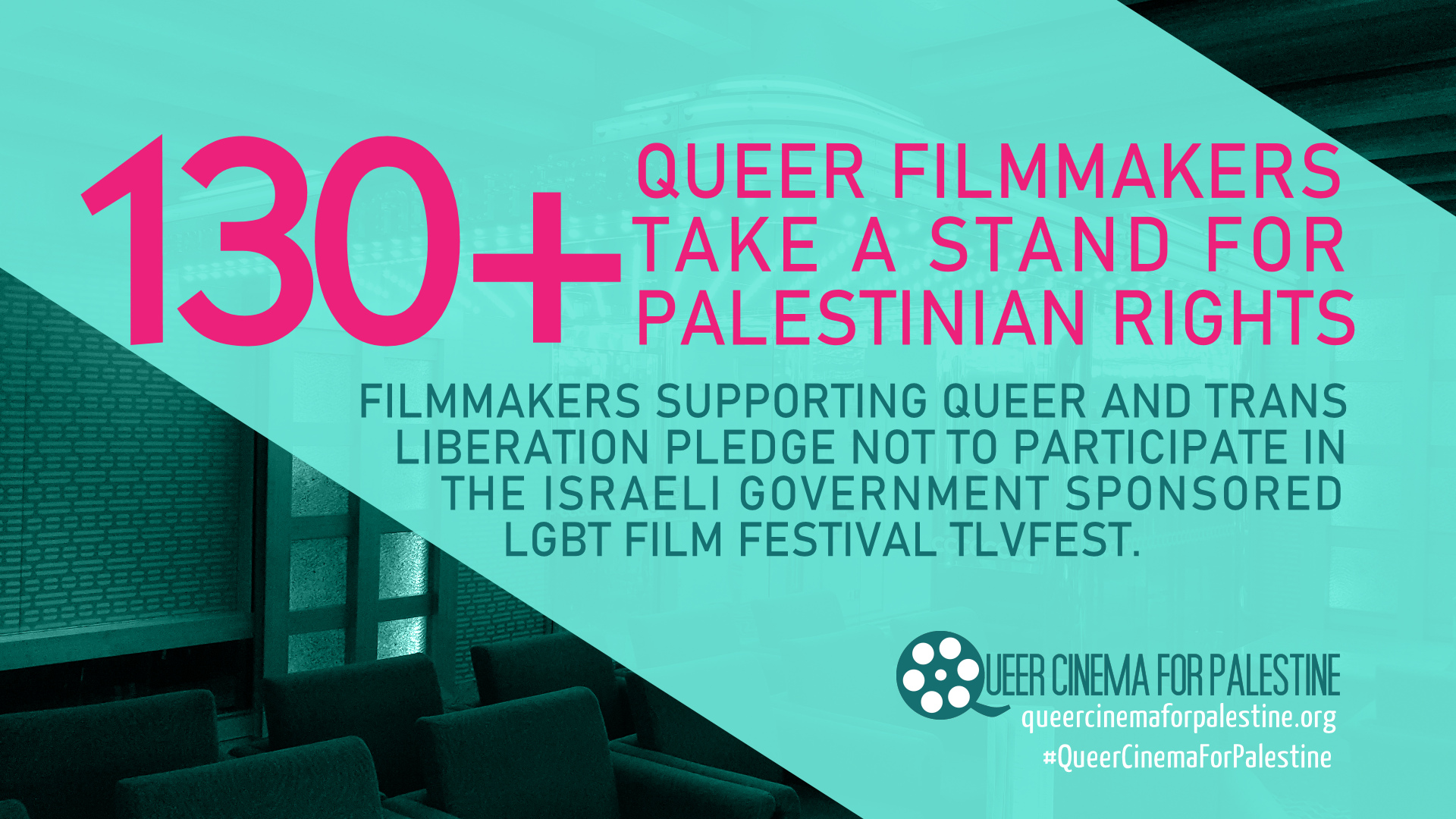 More than 130 LGBTQIA+ filmmakers and film artists from 15 countries have signed a groundbreaking pledge committing not to participate in TLVFest, the Israeli government-sponsored LGBT film festival in Tel Aviv.

The signatories affirm that LGBTQIA+ liberation “is intimately connected to the liberation of all oppressed peoples and communities” and commit “not to submit films or otherwise participate in TLVFest” or other Israeli government sponsored events “until Israel complies with international law and respects Palestinian human rights.”

Palestinian queers have called for a boycott of TLVFest due to its role in Israel’s pinkwashing agenda, which uses LGBTQIA+ rights to project a progressive image to cover up Israel’s grave violations of the UN-sanctioned human rights of millions of Palestinians.

Over the past few years, more than twenty participating filmmakers have supported calls from Palestinian queers and civil society organizations to withdraw from TLVFest.

This pledge marks a new, proactive stand by film artists in solidarity with Palestinian queers and the Palestinian struggle for freedom, justice and equality.

I signed the pledge because queer and other Palestinians are asking international filmmakers to take a stand, just as was done in the fight against apartheid in South Africa. Despite eleven years of calls to reject government funding, TLVFest has fought to maintain it, at the expense of queer Palestinians. In the future, I do hope that I’ll be able to screen my films at TLVFest, when they stop pinkwashing and publicly uphold Palestinian rights under international law as a necessary step towards achieving a just peace for Israelis and Palestinians. Until then, I hope others will also sign the pledge.

TLVFest has enlisted Creative Community for Peace (CCFP) to counter the call from Palestinian queers. CCFP is a front group for Stand With Us, a right-wing, pro-settlement lobby group tied to the Israeli government. Stand With Us has allied itself with the homophobic pastor John Hagee and his organization Christians United for Israel.

I support the boycott of TLVFest. The Israeli government has imprisoned the Palestinian people for decades, colonized them, stole their lands and resources, denied them their right to exist as a nation. The plight of the Palestinians is the great scandal of the beginning of this century. All cultural initiatives allow Israel to develop respectability, an image of an open and tolerant state. The boycott now remains the only instrument for the international struggle against Israeli policy, the only instrument that I have in order not to be complicit in this oppression of an entire people.

In Korea I constantly learn of these pinkwashing issues, so I have tried my best to engage in the BDS movement. Israel is burying its head in the sand, so I couldn’t just wait and see. I signed the pledge in order to deliver the message that I am strongly opposed to pinkwashing. I send Palestinians solidarity with all my heart.

Queer and trans communities are increasingly refusing to be tokenized and used by Israel as cover for its oppression of Palestinians, queer and non-queer alike. Last year, more than 100 LGBTQIA+ groups around the world called to boycott the Eurovision Song Contest in Israel and Israeli government-sponsored Tel Aviv Pride.