The governing bodies of tennis sanctioned Russia just days after its invasion of Ukraine. It is time for ATP to end its hypocrisy and apply the same principles to apartheid Israel by relocating the ATP 250 tournament. 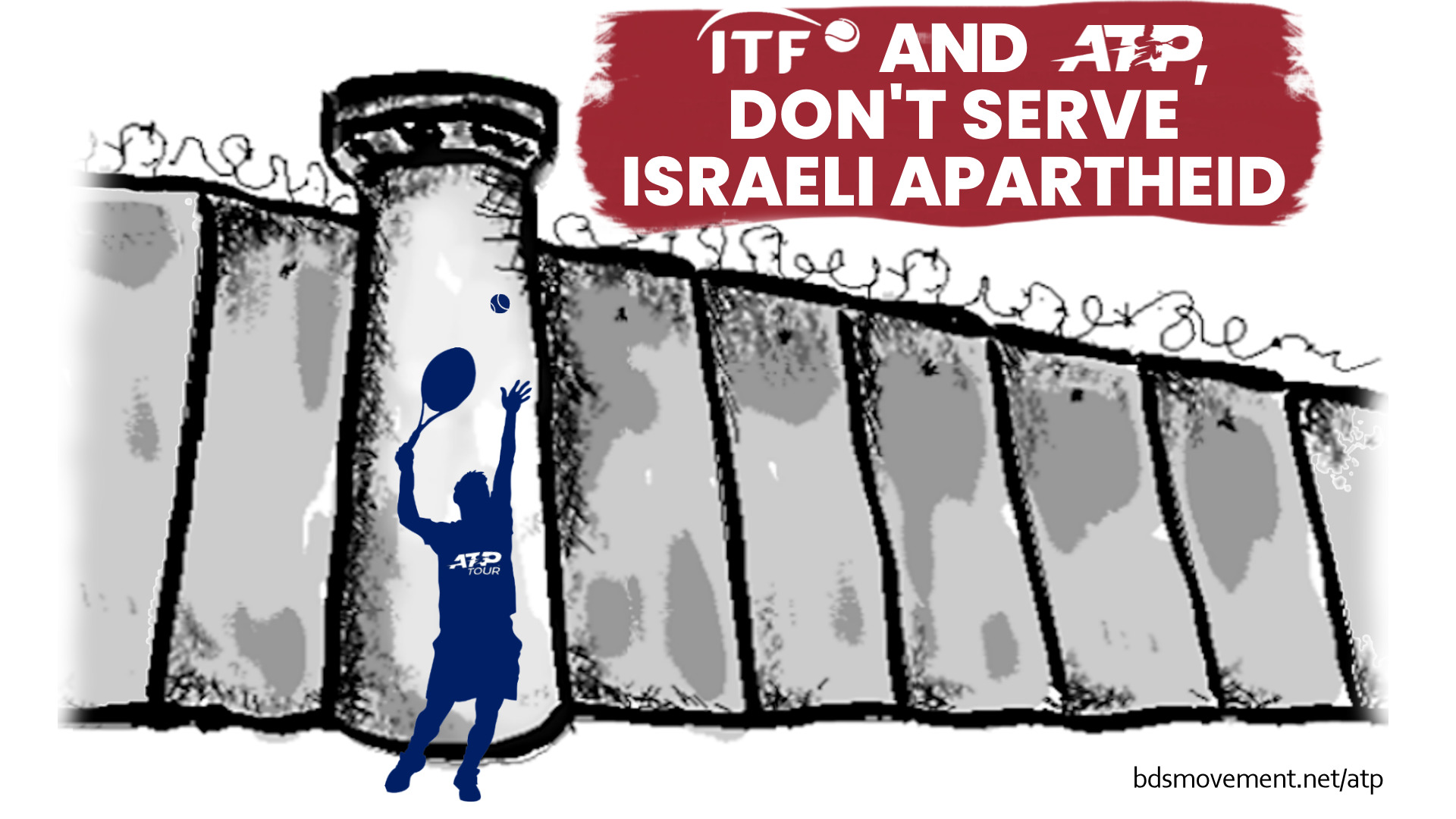 We, the undersigned Palestinian civil society organizations and the Palestinian Tennis Federation, call on the International Tennis Federation (ITF) and the Association of Tennis Professionals (ATP) to immediately revoke apartheid Israel’s license to host ATP tours and to relocate the ATP 250 tournament planned for 26 September to 2 October.

Leading international and Israeli human rights organizations, including Amnesty International, Human Rights Watch, and B’Tselem, as well as Palestinian scholars, have thoroughly documented Israel’s cruel system of racial domination and oppression of millions of Palestinians concluding that it constitutes the crime against humanity of apartheid.

Just days after Russia’s invasion of Ukraine, the governing bodies of tennis, including ATP, relocated the St. Petersburg Open from Russia, canceled all tournaments in Russia and Belarus indefinitely, and suspended the membership of the Russian and Belarus tennis federations. Noting the hypocrisy shown by international sporting bodies, squash champion Ali Farag said earlier this year, “Palestinians have been under oppression for the past 74 years… If we can talk about Ukraine, we can also talk about Palestinians.”

We call for the same action to be taken against Israel’s decades-long regime of military occupation and apartheid.

Over the past 15 months alone, Israel has carried out two extensive military assaults on Palestinians in Gaza, killing hundreds, including more than 80 children, injuring thousands, and destroying vital infrastructure, while maintaining its 15-year illegal siege on the 2 million Palestinians there.

Israel has also shot and killed journalists, most notably Shireen Abu Akleh, whose mourners were then attacked by Israeli soldiers during her funeral.

Israel continues its gradual ethnic cleansing, including the largest single forced displacement of Palestinians since 1967 in Masafer Yatta in the Occupied Palestinian Territory.

Israel continues its attacks on Palestinian civil society, outlawing and shuttering some of the most prominent Palestinian human rights organizations.

Israel, just like other oppressive regimes, sees sporting events as a golden opportunity to sportswash its apartheid regime, just as apartheid South Africa did in its days. Holding internationally celebrated tournaments in apartheid Israel helps provide it with the cover it needs to continue its prolonged brutal oppression of all Palestinians, including athletes, with impunity.

ATP has demonstrated that it clearly understands that rewarding a state carrying out an illegal military aggression with hosting a world class tennis tournament goes against the values of sport, and that sports’ governing bodies have a unique and powerful role to play in pressuring states to respect international law.

It is time for ATP to end its hypocrisy and apply the same principles by revoking apartheid Israel’s ATP license and relocating the ATP 250 tournament.

In the event that ATP goes ahead with the tournament in apartheid Israel, we urge international tennis players to boycott the event in solidarity with our struggle for freedom, justice and equality.

Palestinian Union of Postal, IT and Telecommunication workers

Palestinian Federation of Unions of University Professors and Employees(PFUUPE)

Palestinian Campaign for the Academic andCultural Boycott of Israel (PACBI)

Civic Coalition for the Defense of Palestinian Rights in Jerusalem

National Committee to Commemorate the Nakba