In an open letter, the BNC calls on all AU member states to reject Israel’s request for observer status without hesitation at the next Executive Council meeting based on our common values of freedom, justice, equality and self-determination. 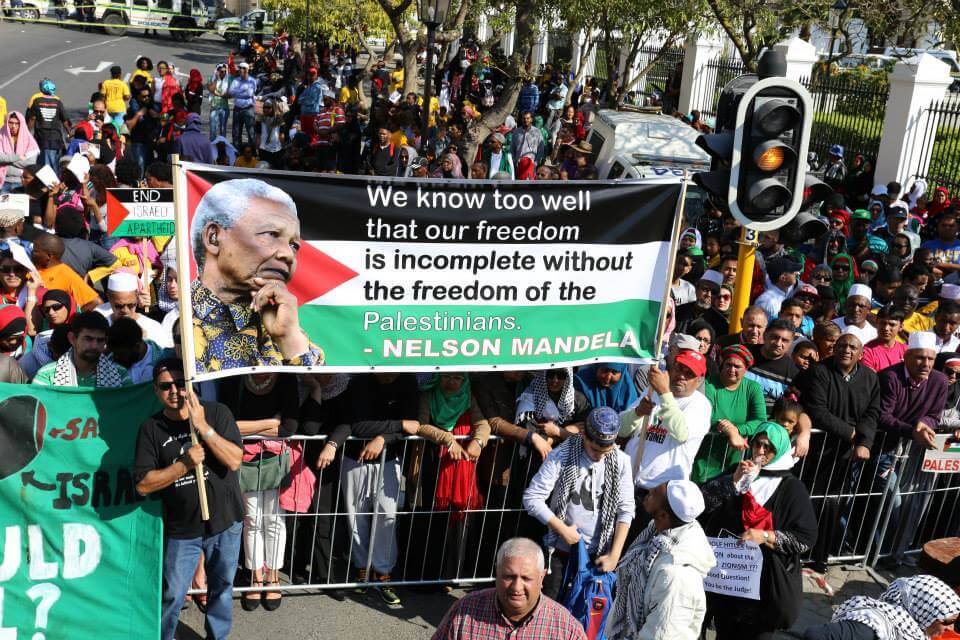 The Palestinian Boycott, Divestment and Sanctions National Committee (BNC), the largest coalition in Palestinian civil society representing Palestinians in the Occupied Territory, inside the Green Line and in exile, expresses its gratitude to all those individuals, organizations and states across Africa that in recent weeks have spoken out against Israel’s observer status at the African Union.

We call on all those that are still hesitant to take a position to join the growing efforts to keep apartheid Israel out of the African Union.

The struggle against colonialism, racism and apartheid is indivisible.

Like many of you, we were shocked to hear that on July 22, the Chairperson of the African Union (AU) Commission, H.E. Moussa Faki Mahamat, announced, without any prior consultation with member states, that he had accepted Israel's credentials as an African Union observer state. We are looking forward to the October 13-15 Executive Council meeting of the African Union, confident that member states will right this wrong.

The African Union and its predecessor, the Organization of African Unity, have historically been one of the Palestinian people’s most important allies in its struggle for self-determination. This alliance has been built on the shared experience of struggles against colonialism, apartheid and racism. Your victories in the quest for independence and in ending the scourge of apartheid on the continent remain for us a source of inspiration and hope. We learnt from you that boycotts, divestments and sanctions, including a military embargo, are the essential tools in fighting apartheid.

The principles and values enshrined in the Constitutive Act of the African Union and the African Charter on Human and Peoples’ Rights, including the elimination of all forms of colonialism, neo-colonialism, apartheid and the promotion of human dignity, are the basis for our bond and cooperation.

It is these principles and rights that Israel systematically violates through its ongoing occupation and colonization of our land and its 21st century version of apartheid.

Exactly 20 years ago, during the World Conference against Racism in Durban, global civil society denounced Israel’s regime as apartheid. Subsequently, the UN Committee on the Elimination of Racial Discrimination (CERD) repeatedly denounced Israel’s policies as forms of racial discrimination and apartheid, and in 2012 urged Israel to prohibit and eradicate policies or practices of racial segregation and apartheid that “severely and disproportionately affect the Palestinian population.”

The 2009 studies by the Human Sciences Research Council of South Africa, the 2017 study by the UN Economic and Social Commission for Western Asia (ESCWA),  the 2021 reports by B’Tselem, a leading Israeli human rights organization, and Human Rights Watch all confirm that Israel’s regime over the Indigenous people of Palestine amounts to apartheid. In 2020, ten ex-presidents and over 700 members of parliament, diplomats and cultural figures from Asia, Africa and Latin America called for a UN investigation into Israel's apartheid and for targeted, lawful sanctions.

We have been grateful to the African Union for rejecting previous Israeli requests to formally associate itself with the AU based on the fact that this would violate the principles of the organization. We want to remind the AU and member states that Israeli policies and crimes against our people have not changed but are worsening daily.

This May, Israel has carried out yet another, large scale bombing further destroying the besieged and impoverished Gaza Strip while the relentless attacks on Palestinians to expel them from Jerusalem and bar them access to their holy places continue unabated. Israeli cruel repression of Palestinians is reminiscent of the brutality meted out by former colonial regimes against African struggles for liberation. A legal framework and ongoing military rule ensure Palestinians are denied their basic rights in all spheres of life.

Israeli racist policies also target African migrants and asylum seekers. Ayelet Shaket, Israel’s Minister of Interior, announced on her first day in office a slew of racist policies targeting the rights of African migrants, forcibly expelling many of them. She has previously called migrants a “crawling African occupation,” while one of her fellow government ministers at the time called them “a cancer,” and another minister reminded them that “this country belongs to us, to the white man.”

Recalling Nelson Mandela’s words that “we know too well that our freedom is incomplete without the freedom of the Palestinians,” we call on all AU member states to reject Israel’s request for observer status without hesitation at the next Executive Council meeting based on our common values of freedom, justice, equality and self-determination.

Instead, we hope the AU can initiate steps to promote investigations into Israel’s apartheid regime over the Palestinian people as a whole as well as into associated State and individual criminal responsibility either through its own mechanisms and/or the reconstitution of the UN’s anti-apartheid mechanisms in order to end apartheid in the 21st century.