The Palestinian BDS National Committee reiterates its call for a boycott of Dubai Expo 2021, demanding governments, companies, and artists to withdraw from this whitewashing event. 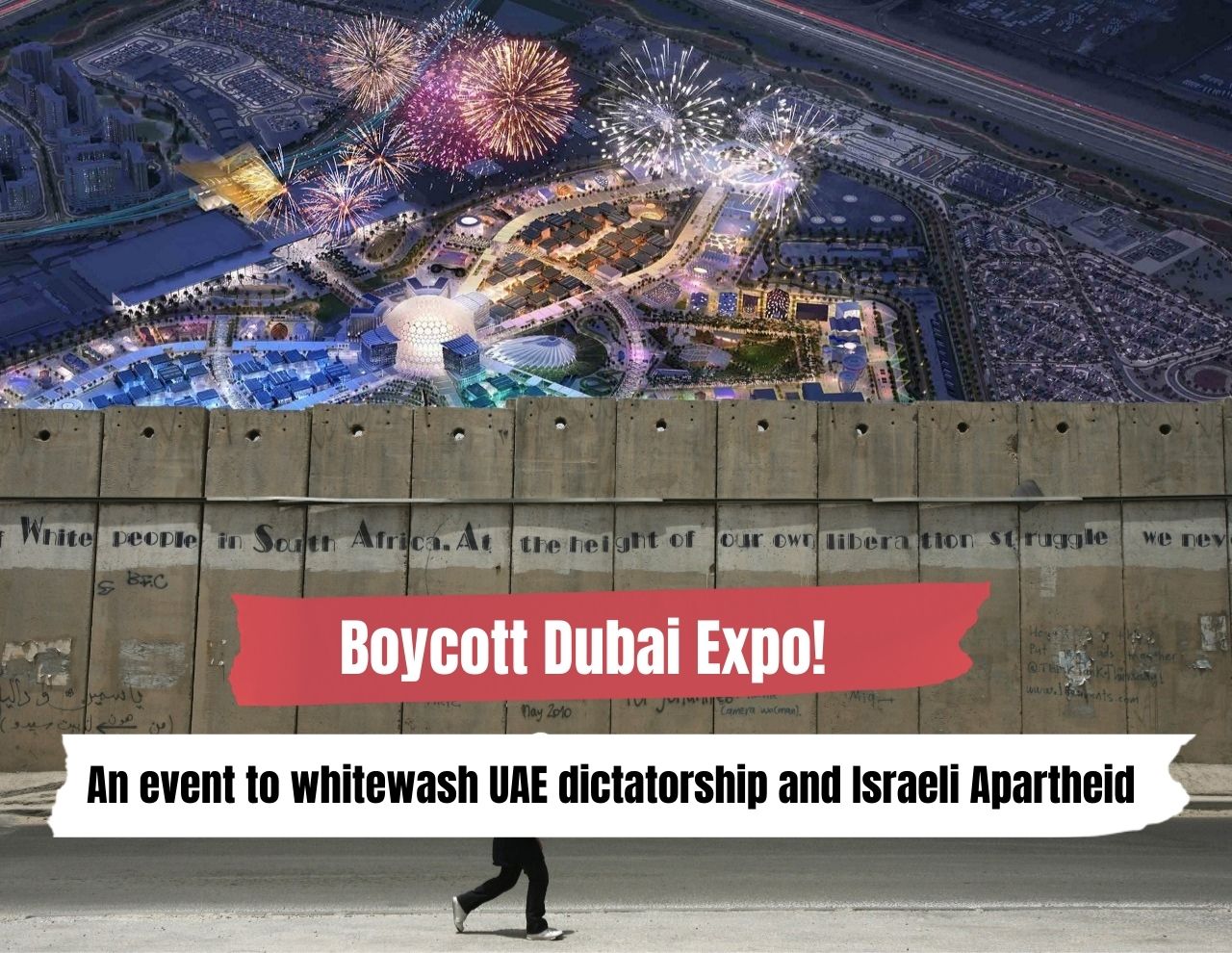 For the first time in the region, the despotic Emirati regime will be hosting the World Expo in Dubai upcoming October. Both the UAE and Israel are shamelessly using the World Expo in presenting a “prettier face” to whitewash and distract attention from their grave human rights violations.

The Dubai Expo is set to be launched in October and will be held over the course of six months, with more than 191 states reportedly participating. The UAE dictatorship is investing massive resources on it as a rare opportunity to cover up its war crimes in Yemen, its horrific human rights record, including criminal oppression of migrant workers, mostly from South Asian countries, and its system of discrimination against women.

The Israeli Pavilion at the Dubai Expo, led by the Israeli ministry of foreign affairs, has been welcomed like no other pavilion by the UAE dictatorship, in its scramble to find new “protectors” of its shaky crown in the light of the precarious U.S. imperial presence in the region.

Israel plans to use this propaganda pavilion to normalize and whitewash its system of oppression against Palestinians in front of an Arab and Muslim audience. With European colonial undertones from a past era, it is trying to market itself as the “glimpse of hope” in the region. It is desperately trying to replace its reality-based image in the region as a regime of occupation, settler-colonialism and apartheid, and as an economy that is largely dependent on “field-tested” military and security exports, which are more exposed than ever for their role in supporting death squads, deadly spyware, mass surveillance and militarized police training.

Expo Dubai takes place in the context of a growing UAE-Israel military-security alliance, starting with the UAE regime’s import of billions of dollars worth of Israeli security and military technology in recent years. The UAE police state has used Israel’s expertise to entrench its mass surveillance and brutal repression of dissidents, human rights and women’s rights activists, and advocates of migrant workers’ rights.

Under the theme of “Connecting Minds, Creating the Future,” Dubai Expo also comes at a time when the Emirati regime is exacerbating its war crimes against the Yemeni people, with full complicity of the U.S. and several European states and their military-security complex.

Hosting the Israeli pavilion at Dubai Expo comes over a year after signing the so-called “Abraham Accords,” which have been overwhelmingly rejected by peoples in the Arab world, including by many Emiarti citizens terrified to publicly oppose it.

In response to this alliance of pariahs, the BDS movement has called for a boycott of all festivals, activities, and projects sponsored by the UAE regime, including the UAE Dubai Expo.

The Palestinian BDS National Committee, the largest coalition in Palestinian society and the leadership of the BDS movement, reiterates its call for a boycott of Dubai Expo 2021, demanding governments, companies, and artists to withdraw from this whitewashing event. We call for escalating worldwide pressure on the UAE dictatorship to end its support for Israel’s apartheid regime, its crimes in Yemen, and its horrendous human rights violations at home.