February 26, 2020
/ By
Palestinian Campaign for the Academic and Cultural Boycott of Israel (PACBI)
/ 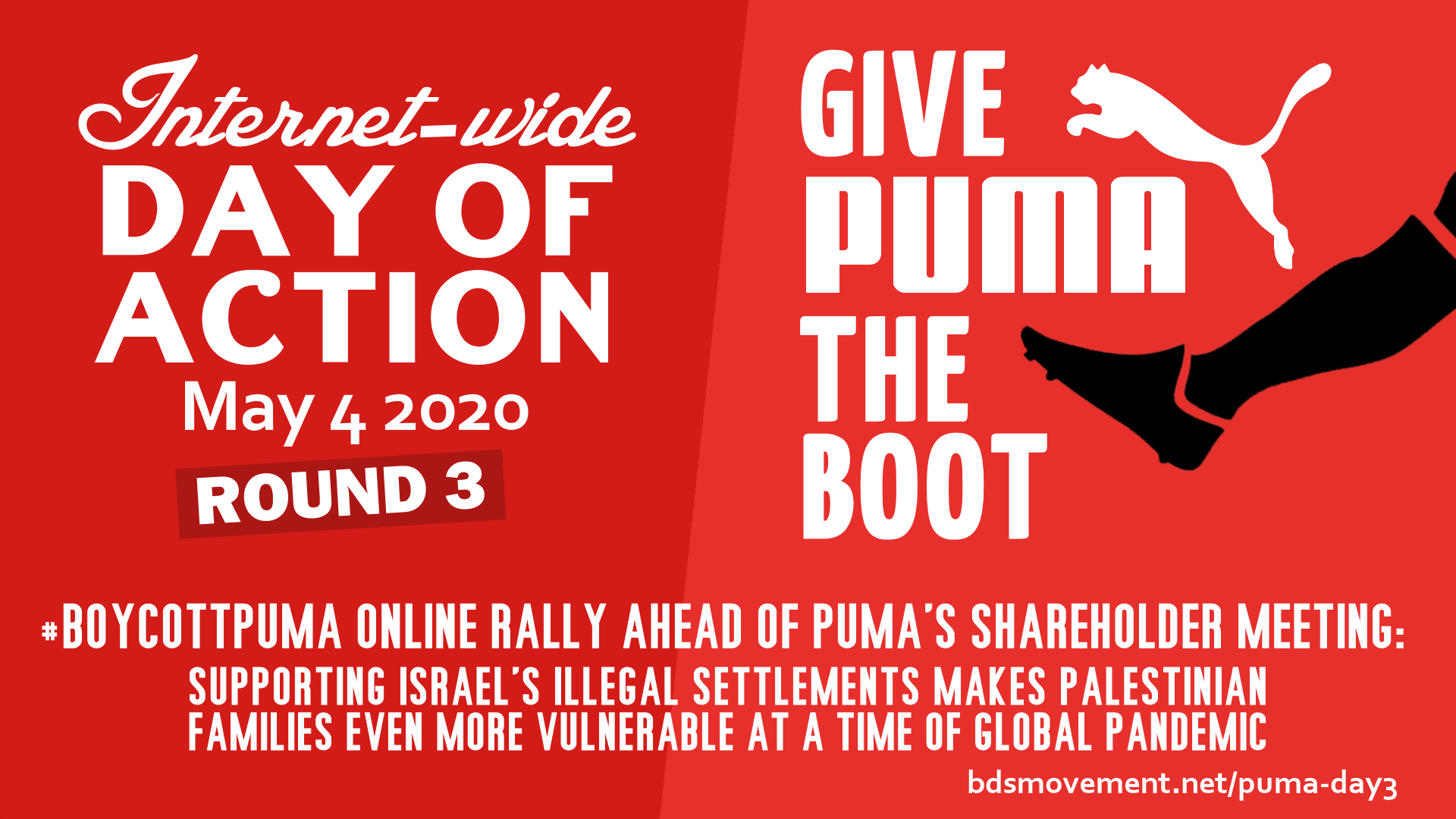 Puma’s exclusive licensee in Israel, Delta, was listed in the UN database of complicit settlement companies. The UN considers all Israeli settlements in the occupied territory a war crime.

Israel’s settlement enterprise and associated military checkpoints and walls force Palestinian families from their homes, limit access to clean water and impede travel to hospitals and clinics. Puma’s claim of a “devotion to universal equality” could not ring more hollow.

In May, Puma shareholders will participate in an online Annual General Meeting. Let’s make sure the agenda includes ending Puma’s support for Israeli apartheid making Palestinian families even more vulnerable.

Puma is the main sponsor of the Israel Football Association (IFA), which includes teams in Israel’s illegal settlements on occupied Palestinian land.

A Puma attorney recently admitted to a Palestinian rights supporter that the #BoycottPuma campaign is making their lives “miserable.”

Malaysia’s largest university has ended a sponsorship deal with Puma in solidarity with the call from Palestinian teams.

UK football club Chester FC decided not to renew with Puma, citing “ethical working practices" among its selection criteria. Premier League club Liverpool FC, which was in talks with Puma, also opted for another sponsor.

Two successful global #BoycottPuma days of action saw protests at Puma shops and offices and calls for Puma-sponsored teams to drop Puma in more than 20 countries. The #BoycottPuma hashtag has generated millions of impressions.

On May 4, ahead of Puma’s online shareholders meeting, join human rights groups and sports associations around the world as we step up pressure on Puma.

Take these three actions for the 3rd Global Online #BoycottPuma Day of Action, May 4, 2020

This is a time for us to unite to begin shaping the world we want to see, where no one is left behind.

Below are additional ideas for the #BoycottPuma Online Day of Action.

Use the #BoycottPuma hashtag and explain why you won’t be a part of #PumaFam.

Set up a #BoycottPuma goal in your home and score a point for Palestinian rights. Share a photo or video on social media with the #BoycottPuma hashtag.

2. Involve the world of sports

Check to see if local teams are sponsored by Puma and urge them to drop Puma. Take a photo with your team’s jersey while holding a #BoycottPuma sign.

Until Puma ends complicity in Israel’s military occupation, I will #RebrandPuma in support of Palestinian teams calling to #BoycottPuma. Goodbye #PumaFam! https://bdsmovement.net/boycott-puma

5. Send the letter from 200 Palestinian clubs to Puma offices

6. Organize an online talk or workshop

Involve local sports associations in a webinar on Israel’s attacks on Palestinian sports and the #BoycottPuma campaign. Get in touch for possible speakers: [email protected]

7. Start a campaign for Divestment