April 30, 2020
/ By
Palestinian Campaign for the Academic and Cultural Boycott of Israel (PACBI)
/
Ahead of Puma shareholders meeting, help ensure ending Puma’s support for Israel’s illegal military occupation making Palestinian families even more vulnerable at a time of global pandemic is on the agenda. 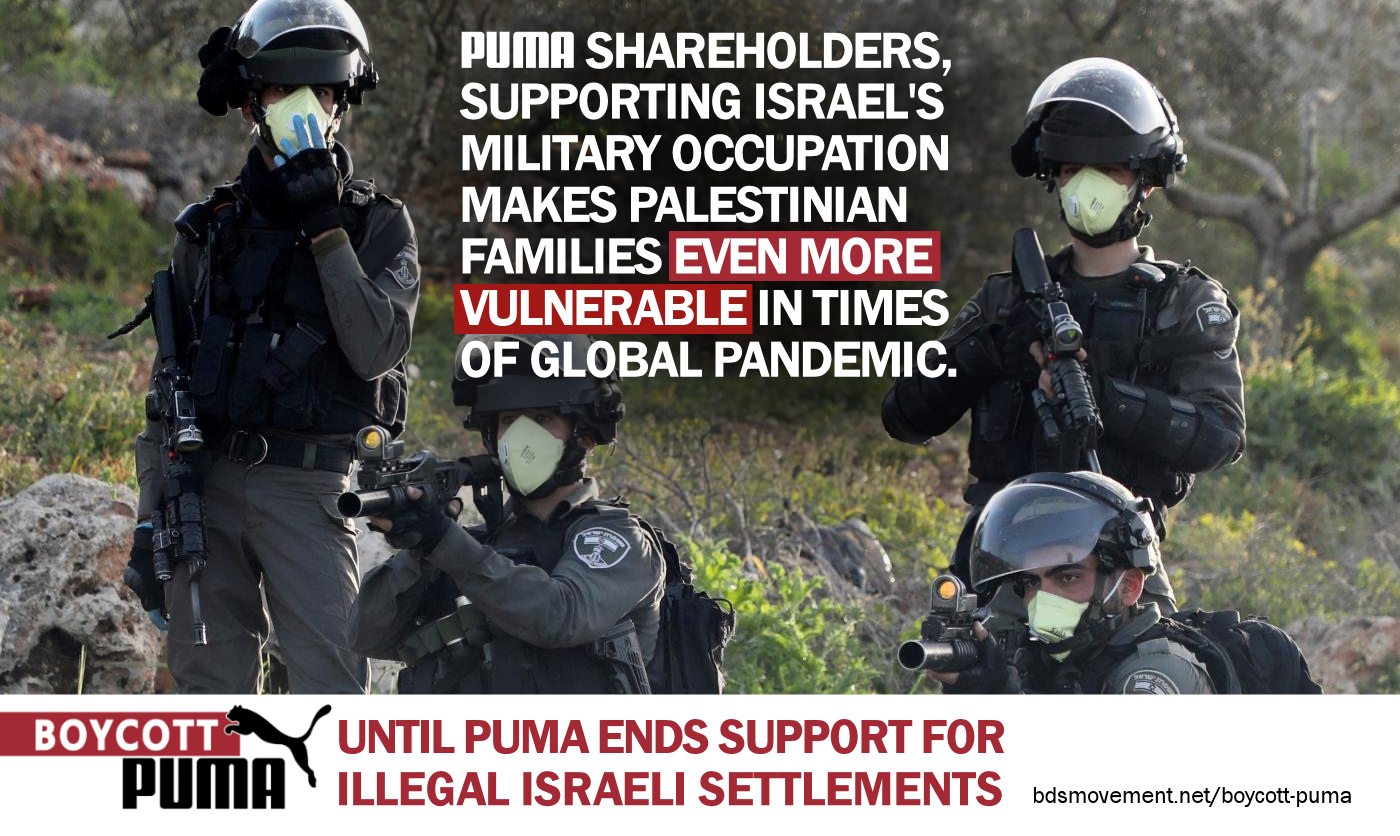 In a few days, Puma will hold its annual shareholders meeting.

We’re staying home, but we won’t be silent! Today, join others across the world for an online #BoycottPuma rally for Palestinian rights.

Want to do more? See ideas for additional actions you can take from home.

Puma sponsors the Israel Football Association, which includes clubs in illegal Israeli settlements, and its exclusive licensee in Israel is listed in the UN database of illegal settlement companies.

Sports teams are dropping Puma sponsorship and pledging not to join the #PumaFam until Puma ends its complicity in Israel’s violations of Palestinian rights.

Puma is listening. A Puma attorney told us that our calls to boycott Puma are making their lives “miserable.”

Take just a few minutes to let Puma shareholders know that supporting Israeli apartheid is not only immoral, but also comes with costs.

Simply follow the script below, and please remember that the customer service helper is not responsible for Puma’s policy. Always be polite, but firm in asking that our message is passed on.

» Take a photo or video of yourself while you call Puma and tweet or post with the #BoycottPuma hashtag!

I’m calling as a customer deeply concerned about Puma’s current sponsorship of the Israel Football Association.

I understand you are personally not responsible for this, but ask you to make a note and kindly pass my message to Puma management and the Puma supervisory board.

In addition, Puma’s exclusive licensee in Israel – Delta - was listed in the recently published UN database of complicit settlement companies.

I join more than 200 Palestinian football teams in calling on Puma to terminate the IFA sponsorship deal and end all support of Israel’s military occupation.

I am extremely surprised that Puma has continued its unethical sponsorship of the Israel Football Association, and am calling to say I will personally be boycotting Puma for as long as it remains complicit in Israeli war crimes.

Please pass this message on. Thanks.

Puma is contributing to serious violations of Palestinian human rights, making Palestinian families even more vulnerable at a time of global pandemic.

Malaysia’s largest university dropped Puma as sponsor of its football team. Following tens of thousands of messages to UK football clubs, Chester FC decided not to renew its contract with Puma citing “ethical working practices” among its criteria, Forest Green Rovers FC stated they would not sign with Puma, and Liverpool FC opted for another sponsor.

The global pandemic shows that now more than ever that we must stand together to ensure that no one is left behind.

As long as Puma supports Israel’s military occupation, I will respect the call from Palestinian athletes to boycott Puma.

Thank you for writing to Puma. Please take additional actions listed on the left to urge Puma to end its support for Israel's military occupation. 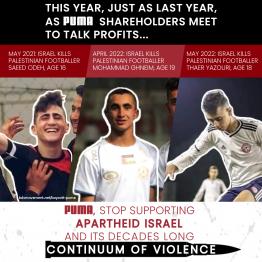 Puma Talks Profits as Israel Kills Yet Another Palestinian Footballer 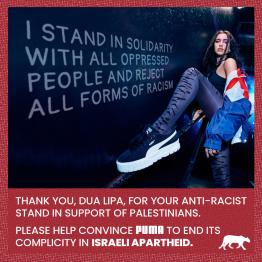 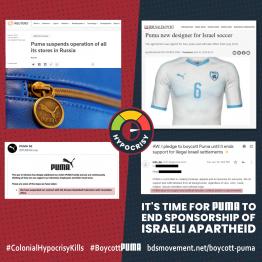