Let’s Push PUMA Over to the Right Side of History. Global Day of Action, February 12

January 14, 2022
/ By
Palestinian Campaign for the Academic and Cultural Boycott of Israel (PACBI)
/

Join groups around the world for the Global Day of Action on February 12 and regular rolling protests as we step up pressure on PUMA to ends its partnership with Israeli apartheid. 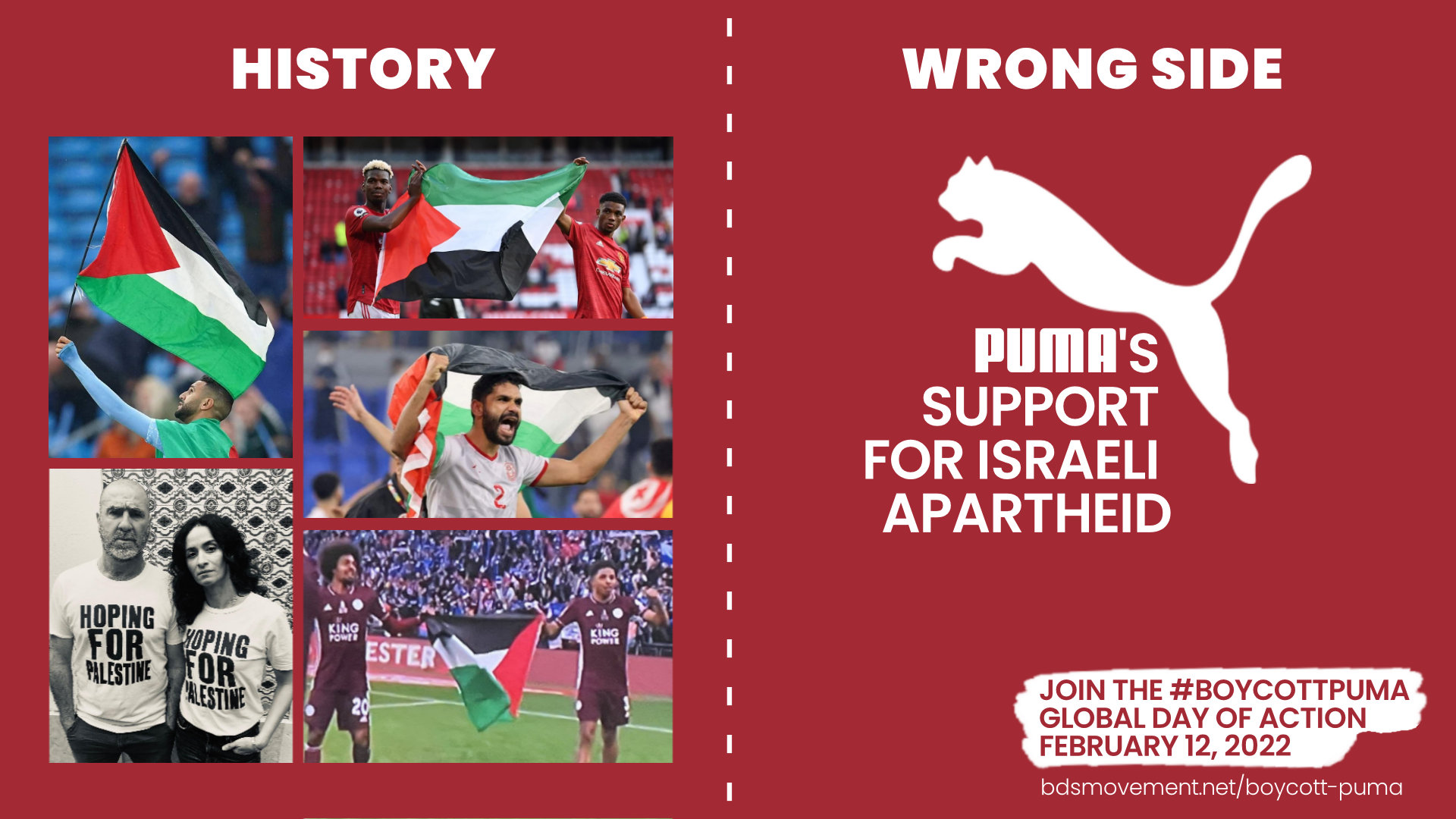 PUMA’s continued support for Israeli apartheid puts it squarely on the wrong side of history.

The year 2021 saw unprecedented support for Palestinian rights across the world of sports, as apartheid Israel escalated its violent oppression of Palestinians.

Let’s step up the pressure and make 2022 the year PUMA ends its partnership with Israeli apartheid.

PUMA sponsors the Israel Football Association (IFA), which governs and advocates on behalf of teams in illegal Israeli settlements.

In a leaked internal memo, PUMA admitted its celebrity ambassadors and business partners are increasingly questioning its support for Israeli apartheid.

More than 120,000 people have signed the SumOfUs petition urging PUMA to “stop its complicity with the Israeli apartheid state.”

A PUMA lawyer told us the #BoycottPUMA campaign is making their lives “miserable.”

Let’s help PUMA find its way over to the right side of history!

Join groups around the world calling on PUMA to drop the IFA.
Register for the Global Day of Action, February 12

PUMA has a window of opportunity to live up to its progressive image and stated “devotion to universal equality.” PUMA’s contract with the IFA ends in June of this year. Now is the time to act to convince PUMA to cut ties with Israeli apartheid.

The #BoycottPUMA coalition, which stretches from Auckland to Oakland, is launching regular rolling protests at PUMA shops, offices, and sponsored clubs. Vibrant protests at PUMA shops have succeeded in shutting them down. Join a protest near you or organize one in your area! Contact us for more information: [email protected].

Israel Football Association
January 14, 2022
/ By
Palestinian Campaign for the Academic and Cultural Boycott of Israel (PACBI)
/