French multinational insurance company called out on day of action over complicity in Israel’s illegal occupation and settlement enterprise. 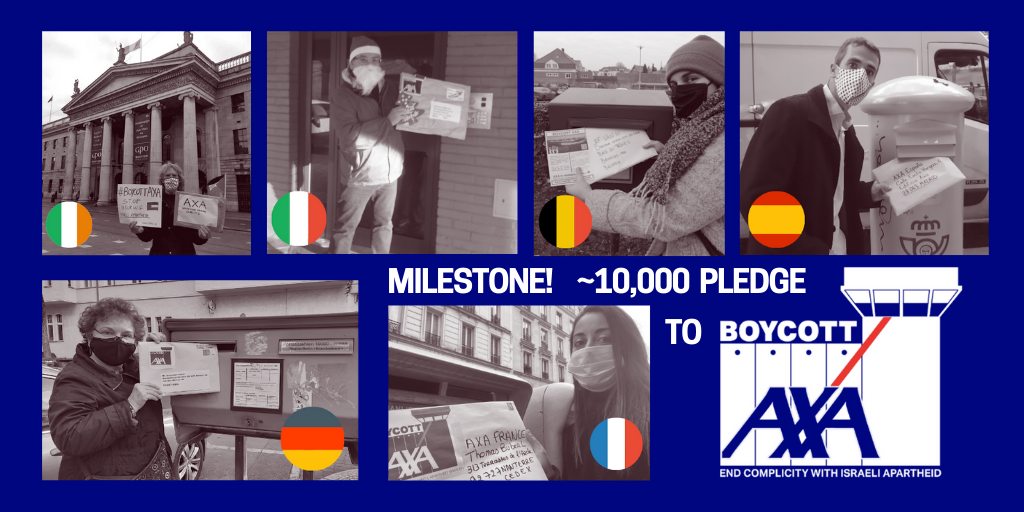 The French multinational insurance company AXA is being called out today as part of an online international day of action over the company’s complicity in Israel’s illegal occupation and settlement enterprise. Campaigners in Europe and around the world are asking people to sign a pledge and join the campaign “to boycott AXA by refusing to buy its insurance products “until AXA ends its support for Israeli apartheid against the Palestinian people.”

A growing coalition of groups in Europe and worldwide has been campaigning since 2018 for AXA to divest from Israeli banks financing Israel’s illegal settlements and from Israeli arms manufacturer Elbit Systems. The online action opposing AXA’s complicity comes as Israel, emboldened by Trump’s support, is accelerating its seizure of Palestinian land and ethnic cleansing of Palestinian communities, and moving forward with construction of record numbers of illegal settlements on stolen Palestinian land.

Even before today’s action, nearly 10,000 people and over 230 organizations and businesses had signed the pledge over the last months. Among the organizational signatories to the pledge are Sabeel- Kairos UK, the US’s Benedictine University, France’s trade union Union Syndicale Solidaires and Belgium’s Coordination Nationale d’Action pour la Paix et la Démocratie. Campaigners in Belgium, Italy, Ireland, France, Germany and the Spanish state have sent the letter with signers to AXA’s CEOs in their respective countries. Additionally, tens of  individuals and organizations have canceled their AXA insurance policies, including the Belgian NGOs Viva Salud, ManiFiesta and Intal Globalize Solidarity.

In signing the pledge to boycott AXA, US scholar and activist Noam Chomsky said:

[Israeli] settlement in the West Bank is a criminal enterprise, even apart from the daily severe abuses. Any support for it is participation in a major and ongoing criminal enterprise. Withdrawal of such support by boycott and divestment is the only honorable course.

AXA invests $7 million in three Israeli banks - Bank Leumi, Israeli Discount Bank and Mizrahi Tefahot Bank - that finance Israel’s illegal settlements. All three are named in the UN database of companies that are complicit in Israel’s illegal settlement enterprise. AXA also maintains a 9% stake in Equitable Holdings, a company which invests in these Israeli banks and in Elbit Systems, a leading Israeli arms manufacturer involved in Israeli war crimes against Palestinians.

By maintaining investments in Israeli banks and in Elbit Systems, campaigners say, AXA is also contradicting its stated commitments to corporate responsibility.

For example, AXA recently launched an initiative on the importance of addressing mental health challenges in Europe, but Israel’s policies of occupation and settlement, supported by AXA’s investments, are the major cause of Palestinians’ mental health problems.

Samah Jabr, Chair of the Mental Health Unit at the Palestinian Ministry of Health, says:

The Israeli occupation has devastated mental health in Palestine throughout the past 72 years through brutal systemic violence--including widespread war, torture, detention, demolition of homes, restriction of movement, and destruction of our economic and social fabric; the occupation is a systemic assault on well-being that has left no Palestinian untouched.

AXA touts its commitment to addressing climate change and investing in green assets. Yet AXA invests in Israeli companies that are arming Israel, financing its illegal settlements and pillaging Palestinian land and natural resources, exacerbating the climate crisis Palestinians face.

Under pressure from campaigners, over the past two years AXA has significantly reduced its stake in Equitable Holdings, while another fully-owned AXA subsidiary has divested completely from Elbit Systems. However, we are demanding that AXA now fully divests from companies supporting Israeli apartheid, and we won’t stop until it does.